Offending people as a consequence will always happen, but when it’s the sole purpose of a piece of work, that’s when we step into dangerous territory.

Alexandra Haddow, a comedian and writer, spoke to me about this: “I think in general modern comedy is moving away from this. You’re always going to get people who love ‘controversial’ comedy, and comedy that’s controversial for the sake of it is usually loved by people who just want a tribe to join. I quite often think these people don’t actually believe or ascribe to the ideas behind it, they’re the same people who go to a football match for the fight, not to watch the game.”

Many people are asking if cancel culture will be the death of comedy, saying that woke millennials can’t take a joke and are over-sensitive, worried that we won’t be able to laugh at *anything* anymore.

In the last week, The Mighty Boosh and The League of Gentlemen have been removed from Netflix for using blackface, Shane Dawson has been called out for sexualising Willow Smith (who was then 11 years old), Jenna Marbles has left YouTube after wearing blackface and impersonating Nicki Minaj, and multiple sexual harassment and assault allegations have surfaced against Chris D’Elia. And whilst many are celebrating, equal numbers are outraged – arguing that people make mistakes, that PC killjoys are ruining all their fun, and that cancel culture is ruining people’s careers (and lives). 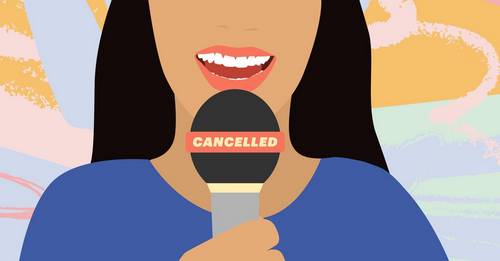 But, if your comedy is only funny because it offends, then is it really that funny? Comedy is about pushing boundaries, challenging the status quo, and getting people to laugh at themselves – this isn’t mutually exclusive with offending, and for too long it’s been seen as the same thing. There are plenty of talented, hysterically funny comedians who create work that isn’t centred on marginalising the already marginalised, or laughing at anyone they see as ‘other’.

Adding: “Have I laughed at an edgy joke before? Yes. Do I believe the message behind it? No. It’s also worth noting that not everything comedians say on stage they 100% believe, I’m completely myself on stage, but for others, it’s an act, so have a problem with the ideas, not the comedian or the show, and let’s not forget that a lot of the time, we go to a comedy show just to laugh and feel extremely silly for an hour or two, it shouldn’t be a dangerous place for anyone, ever.”

The Twitter account ‘Male Comedian Apologies’ has gone viral, with tweets like ‘My heart goes out to the women I’ve hurt, and while my actions are in no way excusable, I believe an understanding of the full context is important: I wanted to do it and I thought I’d get away with it.’ and ‘My conduct has been reprehensible and I deserve to lose EVERYTHING for what I’ve done… for a short amount of time and then be welcomed back like nothing’s happened.’

And that’s the crux of this conversation, really, is that cancel culture has failed to actually ever cancel a comedian – Louis C.K. made a return with a comeback show that sold out, where he told the audience: ‘You are so lucky that I don’t know your thing. Do you understand how lucky you are?

Everybody knows my fucking thing, now. Obama knows my thing.’ – not only did he return, after a very brief hiatus, he then was given a platform to shape the narrative and give his ‘side of the story’. The ‘thing’ being masturbating in front of women who didn’t consent to this – this is sexual harassment, but Louis C.K. was allowed to turn it into a ‘thing’. Considering he’s the case study, the poster boy even, for those who say cancel culture is ruining comedy – there’s been very little long term effect on his career. Chris D’Elia, who has been accused of peadophilia this week, still has 2.4 million Instagram followers.

My heart goes out to the women I’ve hurt, and while my actions are in no way excusable, I believe an understanding of the full context is important: I wanted to do it and I thought I’d get away with it.

Karen Hobbs, a comedian and writer, feels that ‘cancel culture’ is a too light-hearted and watered-down term, saying “the ‘official’ definition is to withdraw support from a famous person/company when they do/say something offensive, and the rape and abuse we are hearing about from these predators isn’t ‘offensive’, it’s criminal.”

Daniel Sloss, a very successful male comic with two Netflix specials, has a dark and often shocking style – but he hasn’t made a career of, say, making light of sexual assault. In his HBO special, X, he addresses his own complicity in the culture of sexual assault against women: “There are monsters amongst us, and they look like us. If you are sick of the narrative that’s currently going on about men feel free to change it, but you have to get involved.

Don’t make the same mistake I did for years, which was just sitting back and being like ‘well, I’m not a part of the problem, therefore I must be part of the solution’. ‘Cause that’s just not how this sh*t works. I believe and deep down I know that most men are good. Of course, we are. But when one in ten men are sh*t, and the other nine do nothing, they might as well not f**king b there.” This act shows that men can be allies in comedy, and that it won’t damage their career, it’ll probably grow it.

just fucking watch it, and then watch it again, and get it through your head that every woman you know has a story and you most likely have been complicit at some point in your life. (from daniel sloss’s “X” which I highly recommend) pic.twitter.com/XMoBm2f532

“Comedy is still primarily seen as a straight, white man’s game. Anyone who is anything other than that is much less likely to get booked on a panel show for example. Anyone who isn’t a straight, white male can’t just be the token woman, the token gay comedian, the token Black comedian. People will ignore their friends, fellow comedians, venue booker’s behaviour (which can be anywhere from inappropriate to illegal) because they don’t want to jeopardise their career. It’s easier to turn a blind eye than it is to speak up” says Karen.

She adds: “We should be on the side of the victim, not the predator, but if the predator is hilarious and famous, then their behaviour is more likely to be brushed to the side because if the boat were rocked, money would fall out of it. Ending abuse and believing survivors needs to be more important than a spot on Live at the Apollo.”

It shouldn’t be called cancel culture, it should be called consequence culture.

How the Pandemic Changed Simone Biles’s Goals, Mindset, and Training

I Started Stretching Each Morning, and I Swear It’s Helped Me Focus