What You Should Know About Bunnock. I am a writer, a blogger, and a proud mom of three, but perhaps, most interestingly, I am a world champion. 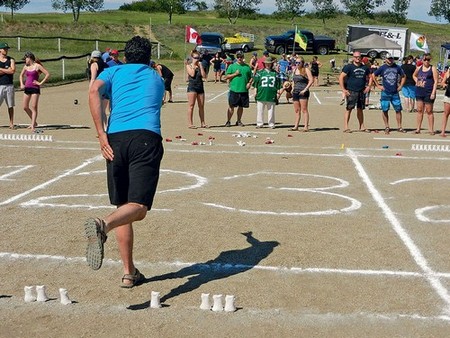 I wouldn’t call myself famous, as you will not find my competitive endeavours televised on any major network, nor have I landed any profitable endorsement deals to date. I am sure, however, that any of the good folks living in and around the small town of Macklin, Saskatchewan, would be happy to fill in the blanks of my – our – extraordinary story.

It begins in 1993, when the Chamber of Commerce in this west-central Saskatchewan town put their heads and hands together to conceive of and host the first-ever World Bunnock Championship… but what’s Bunnock? Nobody’s ever heard of Bunnock, you say?

Well, the more than 360 teams slated to play in this year’s championship tournament during the long weekend in August would beg to differ. Any one of these people will tell you that Bunnock is a proud and long-standing tradition in the town of Macklin.

They will explain that Bunnock is a game, comparable to horseshoes, in which opposing teams compete to knock over each other’s line of horse-ankle bones, spaced ten metres apart, by lobbing – you guessed it – more horse-ankle bones at them! And if you ask why, they will tell you the story of the 19th-century German-Russian ancestors of the pioneer folk of Macklin who, to pass the time on the frozen Siberian landscape, took to throwing about horse-ankle bones. This informal game was handed down to subsequent generations and eventually found a new home as a real-deal world championship competition in Macklin.

They might also share with you some of the names of Bunnock legends, such as Mel Gartner, Chelsey Doetzel or Troy Baier who manage to dominate the tournament year after year. And maybe, just maybe, they will share a fleeting memory of my team – the youngest ever to win the tournament, joining their ranks as World Bunnock Champions in 2001.

I spent a long weekend in Paradise Bay