The likes of Phoebe Bridgerton and Penelope Featherington may be tussling to win the affections of Prince Friederich and be the belle of the ball but without the help of Madame Delacroix, those ladies of Bridgerton may well be busted, in more ways than one.

Emily in Paris may have won 2020 but so far this year, Bridgerton is owning 2021. In fact, the hit Netflix show has got 63 million household hot under the collar since it launched – and with its Gossip Girl-meets-Downton Abbey approach to romance and a representative cast, it’s little surprise.

Yes, the woman responsible for the cleavage-baring dresses of the debutantes is a cut above the rest and she’s cemented herself as one of our favourite characters – and we think she’s got a lot more to give in season 2.

Here, Kathryn Drysdale, the 39-year-old actress from Wigan who plays the owner of Modiste, the dressmaking boutique the women flock to for their luxurious ball gowns during the social season, opens up about her delight at being a part of the show, her close friendship with the cast and the secrets to wearing a corset for hours on end.

What it was like behind the scenes on Bridgerton

I loved every minute of it as we spent so many hours filming together, we were like one big family. It was always so hectic both shooting in the Bridgerton studio and on location. I think because so much of the show centres around these dramatic costumes, hairstyles and makeup that require numerous people to work with, there was a constant buzz of energy.

I am totally obsessed with the Regency era and when I was cast for the part I read up everything there was to know about the period. It also helped a lot that both my parents are language teachers so although I had an amazing voice accent coach on set, learning French was easy as my mother specialises in it.

I’m so happy to be a mixed-race actress playing a part in such a historical period drama. I just love the way the directors worked to bring in every element to the show and keep it relevant to today’s society.

The difficulties I encountered on set

Funnily enough the biggest problem I had was that the shop was always so jam-packed with people that I could never sit down so I was always so busy on my feet. The wigs can be heavy too, especially as I was bending down a lot in my role to pin the ladies dresses.

Also, because I was pretending to be French I had to concentrate on so many things at the same time but that was all part of the job. I suppose the biggest difficulty was dress envy! Honestly, some of those dresses I worked with were simply beautiful.

The corsets were also often difficult to breathe in during filming. There were two different corsets I had to wear during the filming. Most of the time I had a half Regency corset which is restricted at the top of the rib cage but then relaxed so you can let your stomach hang out. However, wearing a full corset is super restrictive. Originally I was going to wear a 19 inch one but then in the end I was put in a 21 inch one. It can be quite difficult to breathe in!

Who I was closest to on set

There were many times we would go out for dinner and drinks. As Daphne (Phoebe Dynevor) and the Duke (Regé-Jean Page) were on set the most they would join us when they could. My closest friend was Siena Rosso, the opera singer who had an affair with Anthony Bridgerton. As neither of us were in the ball scenes we spent a lot of time together. She is a friend for life.

What we can expect from season 2

For now we are just enjoying being swept up in the buzz of this first series but I am so excited to explore the world of Bridgerton further. The show definitely has a lot of life left in it! 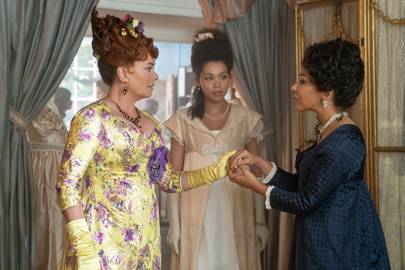 As we come to the end of the interview, I jokingly ask Kathryn to speak as Madame Delacroix for a minute. The way she eases from her Manchester accent into a full French one is so impressive and I’m not surprised that this amazing actress is so sought-after.

From roles in Two Pints of Lager and a Packet of Crisps, ITV’s Benidorm and St. Trinians, Kathryn has also played Meghan Markle in The Windsors and I am sure we will be seeing her gracing our TV screens once again very soon. In fact, I have no doubt the directors will be bursting at the seams to keep her as a member of the cast in season 2; there are, after all, a never-ending list of Bridgerton girls waiting to be dressed and married off.