An eight-year-old boy was finally able to go the store and pick out his favorite pair of sneakers for the first time after undergoing a life-altering bone-stretching surgery on his left leg.

Keanu Cua, of Honolulu, Hawaii, loves playing sports, but he was born with limb length discrepancy, a congenital birth defect, that lead to his left leg being a third of an inch shorter than his right one.

As he got older and his body grew, the difference between the two limbs became five times greater and he had to wear sneakers with heel lifts to compensate for the shorter leg.

In order to make easier for Keanu to be active, his 43-year-old mother Alisha arranged for him to undergo a life-altering surgery eight months ago that would implant an apparatus in his leg that lengthens it.

The device successfully extended his leg, but Keanu suffered several infections and doctors will be monitoring him for years as they fear the leg discrepancy may come back. 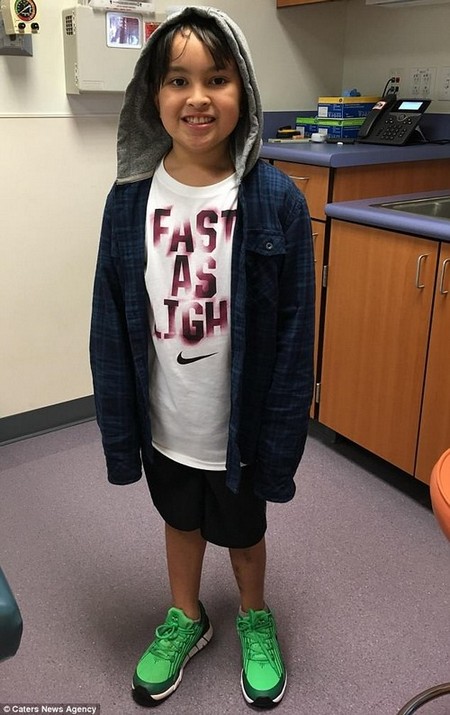 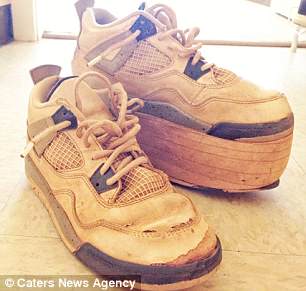 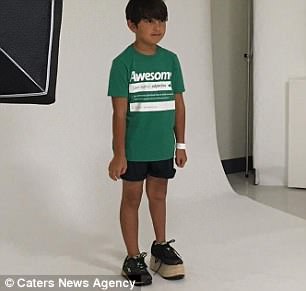 He was born with a limb length discrepancy that lead to his left leg being two inches shorter than his right one. He had to wear sneakers with lifts in them (left) to compensate for the difference (right)

Limb length discrepancy is a relatively common condition, with at least 23 percent of the general population having a one centimeter leg difference or more.

However, greater differences in length, like the two-inch difference Keanu had, can affect a person’s well-being and quality of life.

Due to the leg length inequalities, Keanu had to wear a lift at the bottom of his left shoes to make up for his shorter leg and he even needed to tiptoe while walking around indoors.

‘When he was learning to walk as a baby, he would just naturally stand on his left tiptoe,’ said Alisha, a health and wellness coach. ‘I guess it’s just like anyone who has a disability. They make it work.’

Since he was a huge sports fan, Alisha, mother-of-three, took her son to a doctor to see what they can do to make it easier for Keanu to be physically active.

Last summer, he underwent a bone-stretching surgery that created 10 holes in his left leg and installed an Ilizarov apparatus – an external circular medal device connected to the fibula and tibia bones.

According to experts at the Children’s Hospital of Philadelphia, lengthening shorter limbs is the preferred method for treating this condition. 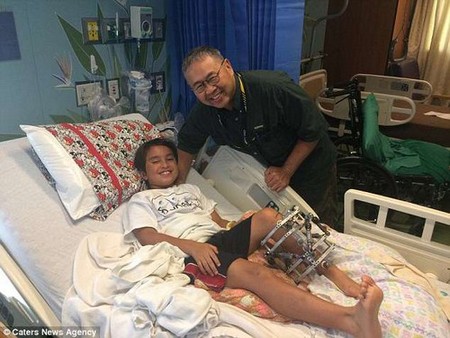 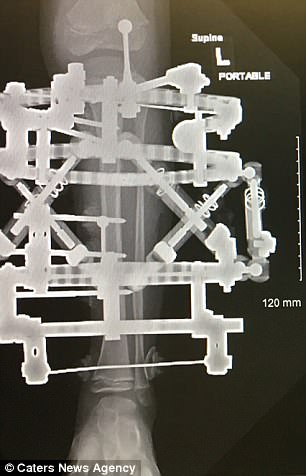 He wore this device for four-and-a-half months, while his family cranked the device every day to help his bones stretch and reduce the length difference.

‘The bone basically kept growing more and more every time we cranked the device,’ Alisha said.

After wearing the device for five and a half months, Keanu was able to pick out a pair of regular sneakers for the first time.

‘He was so excited when I brought him to the store and he was able to pick out whatever sneakers he wanted,’ Alisha said.

‘This changed his life. He was never able to stand without the support of the lift in his shoe.’

When he’s fully healed, he will be able to compete at a higher sporting level.

‘It will definitely make it a lot easier for him to be active and he’s going to start participating in more sports,’ Alisha added.

While the device successfully extended the length of his bone, it caused some complications.

Due to all of the holes he had in his leg, Keanu suffered several infections.

The device in his leg was painful, but Alisha said Keanu rarely complained because he was optimistic and excited to have limbs that were equal in length.

Keanu was born with limb length discrepancy that lead to his left leg being a couple of inches shorter than his right one (left), but the bone-stretching surgery stretched out his left limb (after)

Not out of the woods yet: After speaking with doctors, Alisha said they believe that the two-inch leg length discrepancy will appear again when Keanu is 16 years old

‘Probably the most difficult part of the process for him was the pain of the infections,’ Alisha said. ‘He was very brave and positive for the most part. His attitude about it really blew us away.’

However, Keanu isn’t out of the woods yet.

His doctors believe that by the time he is 16 years old the two-inch difference between his legs will appear again.

Alisha said once Keanu’s bones have finished growing, he will undergo the procedure for a second time to finally fix the problem once and for all.

‘Even though it won’t last forever, I’m happy that it will make things easier for him for now,’ she said.

‘It’s going to be much simpler for him run around and keep up with all the other kids on the field.’

However, she said she worried about how her son will react to the length difference returning but believes he will remain positive no matter what happens.

‘This kid has such a good attitude that he can handle anything,’ she added. 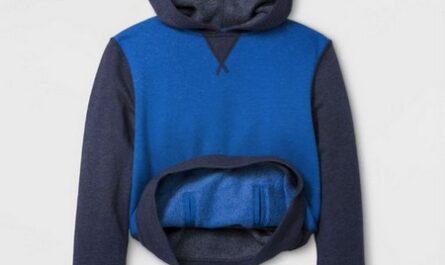 Could AI be about to change how we treat mental health conditions?