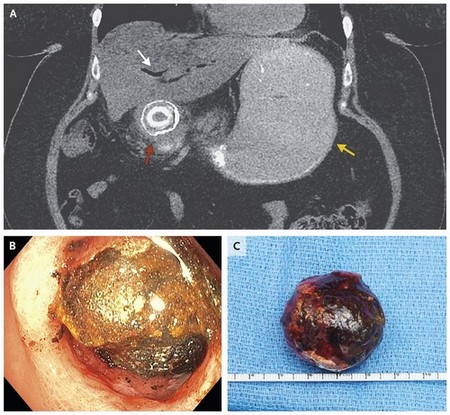 A 57-year-old woman presented to the emergency department with a 2-week history of nausea and vomiting. During the previous month, she had had intermittent episodes of right-upper-quadrant abdominal pain. Abdominal examination revealed a distended abdomen with decreased bowel sounds and mild epigastric tenderness without peritoneal signs. Computed tomography of the abdomen (Panel A) revealed pneumobilia (white arrow), gastric distention (yellow arrow), and a gallstone obstructing the proximal duodenum (red arrow). Bouveret’s syndrome is an uncommon form of gallstone ileus that is characterized by a gastric outlet obstruction caused by impaction of a gallstone in the pylorus or proximal duodenum after its passage through a cholecystoduodenal fistula. Patients with gallstone ileus may present with radiographic findings of Rigler’s triad (i.e., pneumobilia, small-bowel obstruction, and an ectopic gallstone). Mechanical lithotripsy with endoscopic removal of the stone was attempted in the patient (Panel B); however, the procedure was unsuccessful and was complicated by a perforation of the proximal duodenum. The patient then underwent an open laparotomy for repair of the duodenal perforation and removal of a mixed gallstone, which measured 4.4 cm in the greatest dimension (Panel C). She had complete resolution of symptoms and was discharged home 15 days after admission.

What is the alkaline diet and why is everyone Googling it?