A dense cluster of stars surrounds the supermassive black hole that lies at the Galactic Centre. Stars that live and die in the cluster are almost always held captive by the irresistible gravity of this strong concentration of mass.

Consequently, the black-hole remnants left behind by the deaths of massive stars are predicted to have piled up in the central parsec (3.26 light years) of the Galaxy during its lifetime. Theoretical estimates of the number of stellar-mass black holes in this region range from the thousands to the tens of thousands–. Writing in Nature, Hailey et al. reported on what could be the first observational evidence for such a black-hole cluster.

All stars emit X-rays, but only the brightest stellar X-ray sources at the centre of the Galaxy can be observed. Nevertheless, with a single field of view pointing towards the Galactic Centre, the Advanced CCD Imaging Spectrometer (ACIS) of NASA’s space-based Chandra X-Ray Observatory has detected thousands of these sources.

Almost all are found in close binary systems that comprise a normal star and a compact companion. The X-rays are generated by gas that is subjected to strong heating when it is pulled out of the normal star and transferred (accreted) onto, or into, its companion. 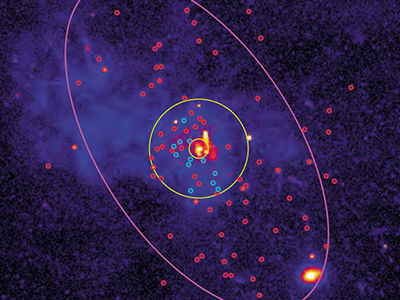 Most of the X-ray sources are binaries that contain a white dwarf as the companion. Such systems are known as cataclysmic variables because their accretion flows lead to an accumulation of matter on the surface of the white dwarf that then undergoes violent episodes of nuclear burning. Much less common at the Galactic Centre are binaries in which the companion is a neutron star or a black hole. These systems are referred to as low-mass X-ray binaries (LMXBs) because of the relatively low mass of the normal star that they contain. High-mass X-ray binaries, in which the normal star is massive, highly luminous and can be seen easily using infrared surveys, have been ruled out through observation, in the central region of the Galaxy considered by Hailey and colleagues.

A compensating factor for the usual scarcity of black-hole LMXBs at the Galactic Centre is the phenomenon of mass segregation. In this process, the gravitational interactions of the stars that orbit the Galactic Centre cause the heaviest ones, or binary stars, to move closer to the centre and the lightest ones to migrate outwards–. Stellar-mass black holes typically have masses that are 5 to 15 times that of the Sun – much greater than those of most other stars in this environment. Such black holes should therefore become strongly concentrated at the Galactic Centre, regardless of whether they are isolated or part of binary systems. Neutron stars, which usually have masses of 1 to 2 solar masses,, should be much less concentrated.

Hailey et al. used a broad-brush examination of the spectra of X-ray sources in the Galactic Centre to distinguish between LMXBs and the more abundant cataclysmic variables. The latter have spectra that are characteristic of thermal emission processes, including prominent spectral lines associated with iron, whereas the former have non-thermal, featureless spectra, indicating emission from extremely high-velocity particles.

The authors distinguished between neutron-star and black-hole LMXBs by using the fact that neutron-star LMXBs undergo violent outbursts of X-rays on timescales shorter than the 18 years for which Chandra has been monitoring the Galactic Centre. By contrast, outbursts from black-hole LMXBs recur on much longer timescales, so the chance that a particular one will have undergone an outburst during the observation window is small. More than a dozen outbursting neutron-star LMXBs (also known as X-ray transients) have been discovered in the Galactic Centre, spread out far beyond the central parsec, and this might be almost the entire population of such objects.

After Hailey and colleagues had accounted for the cataclysmic variables and neutron-star LMXBs, there remained 12 X-ray sources with the expected characteristics of black-hole LMXBs, all of which were located in the central parsec (Fig. 1). This result provides strong evidence to support the hypothesis that black holes are concentrated at the Galactic Centre. Of course, this includes only the close binary systems; there is probably a much larger population – perhaps as many as 10,000 – of isolated, and presently unobservable, black holes in the same volume. But such extrapolation is difficult because the effectiveness of the various mechanisms for producing close binaries is uncertain (but see ref. 10).

Figure 1 | X-ray emission from the Galactic Centre. Hailey et al. examined the spectra of the brightest stellar X-ray sources at the centre of the Galaxy. The locations of these sources are indicated by small circles. The authors identified 12 sources (yellow circles) that have the expected characteristics of close binary systems comprising a low-mass star and a black hole. Such sources are contained in the Galaxy’s central parsec (3.26 light years), which is indicated by the red circle. At the core of this region lies a supermassive black hole, which is itself a prominent X-ray source. The background colours represent the strength of the X-ray emissions, from low (black) to high (yellow).

The lifetimes of close binaries in such an environment are also uncertain. For instance, two known effects can cause the members of such a system to eventually coalesce into a single object. In the first, close gravitational encounters with other stars cause the distance between the members of the binary to decrease until the pair merges. And in the second, on a shorter timescale, the supermassive black hole at the centre of the Galaxy, around which all binary systems in the region orbit, drives mergers. This occurs because the gravity of the supermassive black hole gradually increases the eccentricity of the orbits of the stars in the binary. Eventually, these orbits become so elongated that the two members make contact and undergo a relatively violent coalescence,.

A merging black-hole LMXB would result in a black hole of increased mass. If this new object formed another binary system that then also merged, and such a chain of events continued, it would be possible to produce black holes with masses of up to several tens of times that of the Sun. Such masses lie in the range that has been determined to account for the detailed gravitational-wave signatures of merging binaries that contain black holes. It is unclear whether such large-mass black holes can be created in single supernova explosions of extremely massive stars, but Hailey and colleagues’ findings pave the way towards understanding not only how such black holes can be created, but also how they end up in binary systems.

The next set of observations will probably be a long time coming because Hailey et al. have already used much of Chandra’s existing database for their analysis. In the near future, theoretical investigations of the dynamical formation and evolution of binary systems will be crucial for understanding central clusters of black holes that could be common in galaxies.

The Bachelor’s “Queen” Victoria Has a Real Job