Or what about anti-slavery activist Veeru Kohli, who campaigned to end bonded labour in Pakistan after twenty years of enduring slavery herself?

That was probably a no, which is exactly the problem that 23-year-old Pakistani artist Maliha Abidi is trying to fix.

If you want to plug that deficit in your knowledge, Maliha’s Instagram is a good place to start. She’s been posting her art on social media since 2012 and has a not-exactly modest following of over 46k. Her feed is littered with bright, arresting oil paintings which she creates from the studio in her spare bedroom near Sussex. They almost exclusively feature fascinating women from disparate cultures; particularly highlighting Pakistani women with brave and brilliant stories to tell. 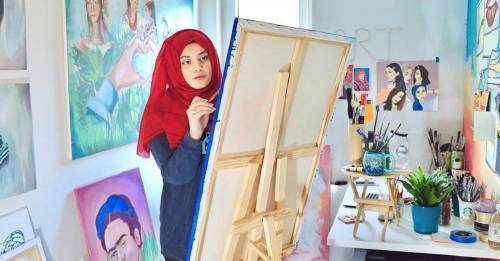 Women, she says, have always been her first inspiration.

“The idea behind portraying women in my work was because; the world for a woman is so different, look at our history, look at our rights, our movement and not just in South Asian countries,” she explains, “Women have to go a great distance just to get a certain right and we do not celebrate them enough.”

Though she now lives in the UK, Maliha grew up in Pakistan, in what she describes as a “constant art workshop” with an incredibly supportive family who nurtured and encouraged her talent.

“I think I come from a privileged background – in terms of the family I grew up in-compared to the other women in Pakistan who face oppression and didn’t get the rights I had,” she says, “Pakistan for me is a happy place, but like every country it has its problems and I am here as a Pakistani to help contribute to the solution; through my art, through my writing.”

Her contribution is her book; ‘Pakistan for Women’ which she wrote, illustrated and kick-started herself: “even the pencils are self-funded!” It is the first book of its kind to be published in Pakistan, celebrating 50 stories of its women; changemakers, rebels, success stories, even rock stars.
“When I sat down to think about it, my list exceeded to over 80 names. I could have gone to 1000 by the end,” she explains, “By that point I was like, what is going on here? How is it that we are not hearing about these stories? It inspired me so much that I wanted to share it with other girls on a larger scale, so that they feel the same way.”

The stories in her book are true tales of entrepreneurial spirit, bravery and determination in the face of often seemingly insurmountable odds. She hopes that it will have a particular message for young girls growing up in Pakistan.

“The idea is to show these women that they can do whatever they want and that there should be no obstacles. There is this thing in Pakistan where, in some cultures and some families, people just either do not support what the girls want to do or they just say ‘oh well do the usual things; be a doctor or a lawyer or an engineer and wait for a marriage proposal.’” She says, “I want to show them that there are so many other possibilities out there for you and if you are worried about success in these fields because your parents or elders have made an excuse, ‘oh because we are in a poor country you may not be as successful as in other countries’ here is an entire book here of women who have not only excelled in their fields in Pakistan- but all over the world.”

Yet Maliha hopes the book will have a global message, which not only raises awareness of these criminally overlooked female icons, but reminds people that we have a duty to empower others.

“When we come together as a community, the change is even greater,” she says, “Even one voice matters so much because you may be give someone else a voice – you can empower people, you can make them heard.”

After our conversation she is off to a lecture at the University of Sussex, where she is studying neuroscience: “I eventually want to start an female organisation that combines neuroscience with art, to give women a platform to pursue their creative side and also learn at the same time.”

Looks like Maliha may one day soon, have to add herself to that book.

The trailer for Last Christmas has landed