How hard was it for you to keep your role as Taskmaster a secret for so long? I had to put it away in my mind and somehow forget about it and pretend it didn’t happen, so that I wouldn’t even be tempted. But I’m usually quite good at secrets.

I even kept it away from my mother. She only found out three days ago.

And you participated in some pretty epic fight scenes. Did you do your own stunts?

I wish I could say 100% I did it all by myself, but take in account the Taskmaster’s skills are quite complex and incredible and there’s nothing she can’t do really because she mimics the opponent. Usually in films, an actor has one stunt double that looks like them. And in this case, I had like three or four stunt doubles because the skills are so complicated.

This is arguably the most female-focused and feminist of all Marvel movies and with a female director in Cate Shortland. How important do you think that is?

I think it’s very important. Because of all the discussions that have been going on and the, nowadays with women’s empowerment, it’s important to see. And I think with the, with this movie, it serves all those messages in a very accessible forum. It’s a great story…I loved working with Cate. It was nice. You can feel the female touch when you watch the movie. When I saw it, it came through so powerfully, how much of a female power that movie had. And it felt empowering as a woman to watch that. Women are strong and not just physically, but strong in their guts, in their corner that they’re strong mentally.

Gender politics is also hugely relevant to your character, with your gender being flipped and revealed as a woman, what impact has that had on how the role has been received?

People don’t expect it. It’s a shock, it’s a surprise and I guess lots of people are very excited about it and happy to embrace it. And some were thrown off by the fact that it’s a woman. I think, especially nowadays, we are fighting for the fact that everyone is equal and gender relations matter, and it’s not about what gender you are. It’s about what skills you have, what kind of the person you are in life. What is it, how good are you at what you do. And if you’re good, it doesn’t doesn’t matter whether you’re a woman or a man.

And she [Taskmaster] is very good when she’s in the costume, you don’t see her, it could be anyone behind it. It could be a beast…But it just happens that behind it is a very sensitive soul and she is a woman, but her skills are no less powerful because she’s a woman. 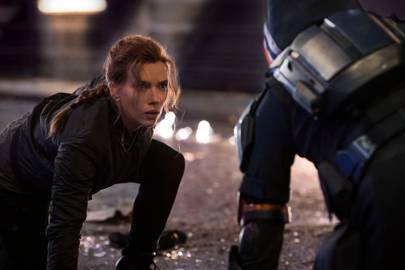 There are so many parallels in the film with abuses of power that have been exposed with #MeToo. Have you ever experienced any uncomfortable power dynamics in your career?

Yeah, it has happened to me. A couple of times. One thing I can say, I have always, I think I’ve dealt with it very well, because I cannot be intimidated actually. And there is nothing I can be talked into. So you can talk to me as much as you want. There’s no, if I don’t want to do something, there’s no way I will agree to it in the end. So the mental pressure doesn’t work with me. I’m not that desperate for success. I’d rather let go. I don’t need to succeed and if it means I lose my career, I’d rather lose my career.

Post #MeToo, what changes have you seen in the industry in terms of how women are treated?

I see big changes. Obviously it can flip to the whole other side and become another extreme, [in that] I’ve seen men terrified to speak to women as a result of it, but I guess we’ll have to go through that in order to stabilise it. But yeah, people are much more careful, men are careful…women are listened to more and heard and supported.

You contracted coronavirus early on in the pandemic, how was that and what impact did that have on you?

Well, I did think, okay, am I going to die now? I got scared because obviously back then we didn’t know what it was. I was one of the first, so I just thought it was a deadly disease.

Did you go to hospital?

I did go to hospital because I panicked. I called an ambulance because my fever was over 39 and I was shivering and I couldn’t get warm. I was under three blankets and in a bathrobe. My teeth were clenching and I knew that something was severely wrong. So I went to the hospital and they told me two or three days later that I had coronavirus.

You seem like a very strong character, but how do you deal with your mental health? Have you ever suffered with mental health problems?

Well, that’s an interesting question. Seriously, who isn’t dealing with mental health problems nowadays? I think we all do with the smaller or bigger form, of course. I’m not a robot. I have feelings and I have my, I get sad and anxious and I just, how do I deal with it? I usually read. Books help me. I read books on the subject, whatever is going on. And a lot of my books that I read are self-help booksor philosophy books or psychology books. It helps me understand. I love reading. And I, this is what keeps me sane

You recently spoke about wanting to have another child so that your son could have a sibling. Would you consider doing it on your own?

No, not right now. I cannot say for later, but right now, no, I don’t like that idea, but that’s my personal choice and this is not a judgment. But if I have to, I probably will later. I don’t know. I change and I’m not stuck on my opinion. I research and I read and think let me change my opinion. And that’s what’s actually great, that’s about growing.

What is the best piece of advice you’ve ever been given and from whom?

[The film director] Terrence Malick once told me, “Follow your instinct because yours are great.” And I said, “Okay.” Because I have a tendency, I’ll have the instinct, but then my mind kicks in and it’ll overpower it. I’ll over-intellectualise it. And therefore, I won’t listen to the instinct. And in the end I realise, oh, I should’ve listened to my instinct.

When have you felt the most empowered?

I always try to live my life and not depend on others. And I think that for me, the most terrifying thing is to have to depend on someone. I don’t know where I get that from, again, [maybe] that has to do with my upbringing and my past and everyone’s different. And maybe it would be easier if I accepted to depend on someone because I could just let go a bit and breathe. But I don’t know how to do that. And, but at the same time, there’s something very empowering about it because I’m my own boss and no one can tell you what to do and I’m free.

It gets me. I get disappointed, but I don’t beat myself up. Do you know what? I think if failure was something that dragged me down, I would have never have gone forward…So failure gets me at the moment and it’s unpleasant and I think, oh, wow. And then I’ll think, oh, you can do this. And then time will go by and then I’ll read some more books and research and I think, okay, how can I get better? And I’ll work on it. And it’s funny, failure gives me a drive.

Finally, What it was like working with Scarlett Johansson?

It was great. I always admired Scarlett and I was so excited to meet her in person. And I always had a feeling that she was a cool girl. And when I met her, I realised it’s the truth. Speaking of strong women, she’s a strong woman. It just comes through in conversation in the way she is. And I love meeting a strong woman. Again, it empowers me more, it motivates me because these people are an inspiration.