In summer, the problem of unwanted hair becomes one of the most actual for the female half of humanity. Which way to choose, if you suddenly remembered at the time of putting on a short skirt? Shaving my legs every day is not an option.

On electro-depilation and photo-epilation it was necessary to think early, months so three before the summer. Bioepilation or hair removal by wax is perhaps the most affordable and, according to the cosmetologist, the most demanded procedure. It is enough to do it once a month. The hair is immediately removed from the entire surface. And the procedure takes a little time. The correspondent of SE went to check this data on its own feet.

“Will it hurt?” – I asked the beautician. “If it’s the first time, it can be painful,” answered the woman in a white coat honestly, and I prepared myself for the mascara on my eyelashes to flow from tears. I was put on the couch, and before I had time to recover my senses and prepare for the agony, a very hot substance appeared on my knees, which the beautician applied with a special device with a roller.

A few seconds after application, while the wax is not cold, it needs to be removed with special paper strips, to which it sticks tight. And if you consider that before this wax with about the same force attached to the leg, he can not easily leave the skin and takes with him everything that is badly lying, and sometimes stands on end – unnecessary to us hairs.

The skill of the cosmetologist is to remove the strip of paper stuck to the wax with the necessary force and very sharply. Lack of strength or slowness of the action leads to the fact that the hairs remain in their place.

It was this problem that prevented me from waxing the house at home – each time I did not have the willpower to tear off my skin. Only long hairs are pulled out, so before the epilation they should grow to 5 mm. Those that were too small during this period will grow up just in time for the next procedure. From separately sticking out, grown after the procedure of hairs can be eliminated with tweezers. 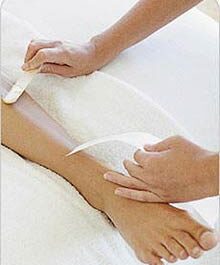 As for the impressions, on the knee and calves the sensation could be described by the word “plaits”.

Closer to the ankle, it became really unpleasant, and every stroke of the cosmetician’s hand was accompanied by an involuntary cramp of my leg.

But, again – tolerant. And, if you believe the beautician, it hurts only for the first time, and after the hairs become weaker and thinner and resist the elimination already much with less persistence.

The procedure took 30 minutes. First, both shanks were treated from the front, then from behind – I had to lie on my stomach. After the treatment the master looked through the skin again, fixed the troubles in the form of the surviving hairs, applied butter on the shins with chamomile – it removes the wax residue and calms the skin, which, of course, feels irritated. Unlike her owner – my legs looked much better than after self-shaving in the bathroom.

Advising not to wet your feet during the day and taking 400 rubles (it was in “Leley”), the beautician sent me home. The skin was tingled until evening, and before going to bed, having examined my legs, I was horrified – they were covered with red bumps. So I brought beauty, I thought with vexation. But in the morning redness subsided, and the points disappeared after a couple of days.

The skin looked as if it had never had hair on it. They only remembered themselves about almost two weeks later, when some roughness appeared. The visible manifestations of hair were passed through three weeks after the procedure.

All is well, but you need to remember about precautions. The fact is that the wax can clog pores, which often leads to ingrown hairs under the skin. Fight this problem simply – light scrubs 2 times a week and the mandatory use of lotion or oil for the skin after a shower. How to care for the skin after hair removal, I found out by myself, the doctor warned me only that it is impossible to take a bath on the day of the procedure. On the day of epilation, you can not wipe the skin with alcohol-containing lotions. You can not sunbathe in a tanning salon or in the sun for 48 hours after the procedure.

But when these 48 hours pass, then sunbathing, admiring your smooth skin, is strongly recommended for a good mood.