Billie Eilish’s oversized clothing has become one of her staples, and she’s said multiple times there’s a reason behind it. “I never want the world to know everything about me,” she explained in a 2019 Calvin Klein campaign. “I mean, that’s why I wear big, baggy clothes: Nobody can have an opinion, because they haven’t seen what’s underneath.” In a June 2019 interview with Vogue Australia, she said her style “gives nobody the opportunity to judge what my body looks like.” 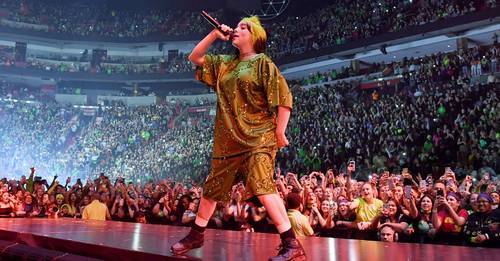 But in a video interlude for her Where Do We Go? World Tour, which kicked off March 9 in Miami, the pop star addressed exactly that: the idea of people judging her – or anyone’s – body. In the clip, Eilish is seen slowly undressing as she gives a powerful message about body-shaming. Per BuzzFeed, fans who attended the show say this was Eilish’s full speech:

“If I wear what is comfortable, I am not a woman. If I shed the layers, I am a slut. Though you’ve never seen my body, you still judge it and judge me for it. Why? You make assumptions about people based on their size. We decide what they’re worth. If I wear more, who decides what that makes me? What that means? Is my value based only on your perception? Or is your opinion of me not my responsibility?”

Watch a (somewhat shaky) fan video of the interlude – courtesy of the Twitter account Eilish Tour News – for yourself, below:

Fans flooded to Twitter to praise Eilish for taking a stand against body-shaming. “Billie is using her tour as a platform to send a positive statement to her fans by using an interlude about how people’s opinions on her body aren’t her responsibility is so powerful,” one fan tweeted. “I love this woman so much.”

See, below, just a few reactions from fans:

billie stripping down and showing off her body while expressing that everyone else’s opinions don’t matter cause SHES confident and your opinion of her is NOT HER RESPONSIBILITY is a fucking power move.

BILLIE EILISH HER BODY SHAMING SPEECH IS EVERYTHING EVERYBODY NEEDS TO HEAR!!!!!!! I wish I was a teen when she came up she would’ve given me so much strength! luckily my gen had Demi Lovato for topics like that ???

Eilish hasn’t commented on the response to the interlude yet, but stay tuned.