Bette Midler, Sarah Jessica Parker and Kathy Najimy are returning to our screens as the Sanderson sisters for for a virtual ‘Hulaween’ fundraiser, in aid of the New York Restoration Project.
This is just the news we needed on a Monday morning. Bette Midler has taken to Instagram to share a first look at the Hocus Pocus reunion and all of our Halloween dreams have come true at once.

Bette Midler, who played Winifred, shared the behind the scenes snap to Instagram with the caption: ‘Your 3 fav witches – @sarahjessicaparker @kathynajimy ME – are returning for 1 night only on 10/30 at 8p ET!

“In Search of the Sanderson Sisters” is the best thing to happen to #Halloween since Hocus Pocus + Reeses Pieces. Get your tix now (link in bio) and support @NYRP #nyrphulaween’. 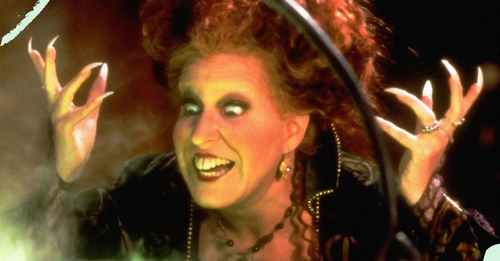 Fans were quick to show their delight at the reunion, commenting: ‘THIS IS ALL IVE WANTED FOR YEARS’, ‘This is the greatest thing to happen since 1993’, and ‘Wouldn’t be Halloween without Hocus Pocus. Iconic’.

Another hopeful fan added: ‘Hopefully there are more nights you are together…. like on the set of Hocus Pocus 2!’

Rumours of a Hocus Pocus sequel have been circulating for years now, and Disney+ officially confirmed the new to Entertainment Tonight in October last year. Though the studio has yet to confirm the original cast’s involvement, Bette Midler teased ‘I can’t wait to fly!’ before telling ET: ‘We’re just talking logistics’.

Sounds like a sequel with the OG trio could be coming sooner than we think!

Chalk Balk – why they matter now more than ever