Cheryl Reid, 31, from Belfast, was advised three times to turn off the life support that was keeping her 12-year-old son, Taylor, alive. A mother today told of her joy after her ‘brain dead’ son made a miracle recovery – even though doctors claimed he wouldn’t survive.

They feared he had just a two per cent chance of making it through, after the keen biker endured a horror crash in a field two years ago.

He was left completely unresponsive and unable to breathe on his own – but doctors have now ‘retrained his whole brain’.

Taylor – a prize-winning biker who has raced since he was just five years old – is now able to smile and can understand ‘every single world’ spoken to him. 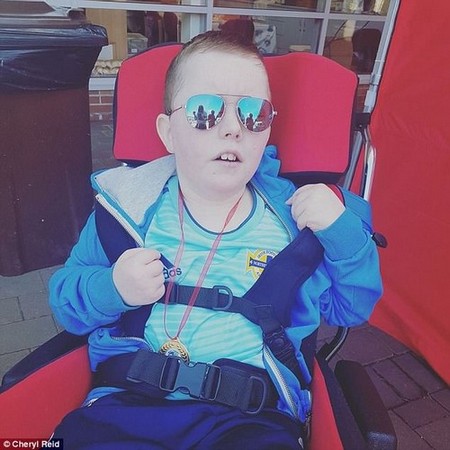 Cheryl Reid, 31, from Belfast, was advised three times to turn off the life support that was keeping her 12-year-old son, Taylor, alive

His ‘miracle recovery’ comes as ‘warrior’ toddler Alfie Evans survived yet another night without life support at Alder Hey Hospital.

Alfie’s parents have now dropped their legal battle to fly him to Italy and are instead pleading with doctors to allow them to take their son home.

Mrs Reid, who has two other children, credits the team at the Craniaa Neuro Rehab Centre, a private rehabilitation clinic.

She told BelfastLive: ‘They doctors told me his emotions were gone and he would never feel pain. Basically his body was breathing, but he was gone.’

But, speaking of Taylor’s incredible recovery, Mrs Reid added: ‘Now he’s crying and about five months ago he started smiling, and he’s laughing too.

‘We are getting wee bits of him back and you can see his personality now, but it’s definitely down to Dr Goshi (Gopalan Sivakumar). 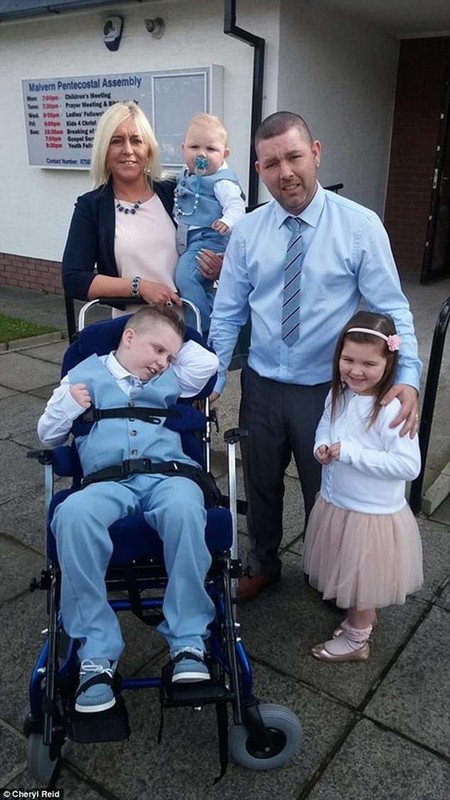 They feared he had just a two per cent chance of making it through, after the keen biker endured a horror crash two years ago (pictured with his brother and sister Brooke and Cole) 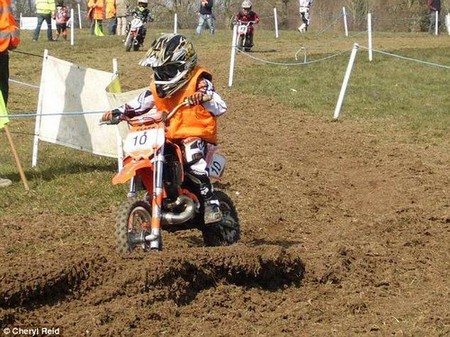 Mrs Reid now revealed the family have discussed going to India for stem cell therapy, in the hope of restoring some of Taylor’s brain damage, following his horror bike crash in May 2016.

It comes after Bioquark, a Philadelphia-based company, announced in late 2016 that they believe brain death is not ‘irreversible’.

To be declared officially dead in the majority of countries, you have to experience complete and irreversible loss of brain function, or ‘brain death’.

According to Mr Pastor, Bioquark had developed a series of injections that can reboot the brain – and they plan to try it out on humans.

‘I am so glad I have stuck with it. He’s amazing, that man. Taylor didn’t know what planet he was on, but since he started treating him, he’s a different wee boy.’

‘At the start there was no response whatsoever, but now when I bring him every Tuesday, his eyes are wide open and he’s smiling – all the things they told me he would never be able to do again.

‘He responds and knows every single word you are saying to him now.’

Mrs Reid, who was heavily pregnant at the time of her son’s crash in May 2016, said he would have definitely have died if he hadn’t of worn his neck brace.

She was told it was unlikely her son would make it through the night – but he pulled through.

Taylor, who had multiple fractures to his skull, spent three weeks fighting for his life in intensive care at The Royal Belfast Hospital for Sick Children.

Mrs Reid, who was heavily pregnant at the time of her son’s crash in May 2016, said he would have definitely have died if he hadn’t of worn his neck brace (pictured with husband David)

Mrs Reid, married to David, was told by doctors his brain had ‘completely died’ and he spent a further nine months on the hospital’s Paul ward.

The couple visited him in hospital every day, and took his younger siblings Brooke and Cole, who has born just three weeks after Taylor’s accident.

Mrs Reid then decided to take him for a two-hour session at the Craniaa Neuro Rehab Centre each week to boost his recovery.

She has now revealed the family have discussed going to India for stem cell therapy, in the hope of restoring some of his brain damage.

Taylor’s story comes after Alfie Evans survived yet another night without life support as his parents dropped their legal bid to take him to Rome and said: ‘We want to take him home’.

Alder Hey’s doctors ‘hate us and look down on us because we’re not like them’, says father

Alder Hey’s doctors ‘hate’ and look down on Alfie’s parents and family, his father said today.

Tom Evans says medics avoid them in corridors and give them ‘horrible smug looks’.

When asked why, he responded: Because I’ve fought against them for so long and I’m right.

‘We’ve tried to work with them but they’ve acted aggressively towards us. They’ve fought so hard towards us.

‘We walk around the corridors and they pop into other cubicles to avoid us. T

‘They give us some horrible smug look as if we’re in the wrong. It’s like we’re criminals and we’re being looked down on’.

He added: I feel like I’m in a maximum security prison and they’re looking down on us.  If this was a general case they would have let home go home by now’.

Tom Evans said he and the ‘warrior’ toddler’s mother Kate James will meet with Alder Hey’s doctors this morning to discuss leaving the Liverpool hospital, claiming his son could survive for ‘months, possibly years’.

Alfie’s parents held another vigil at his bedside overnight and posted video and photographs of their son sleeping peacefully and even appearing to smile at one point.

Speaking this morning Mr Evans said: ‘For three days since life support was withdrawn there have been no problems with Alfie. He’s still breathing on his own and going strong. The nurse came in this morning said “wow”. He’s proving everyone wrong’.

He added: ‘It’s not a miracle – it’s a misdiagnosis. As I sit next to Alfie’s bedside, every second of every day, it encourages me more and more that he will live for ‘x’ amount of months, possibly years.’

Yesterday Court of Appeal judges rejected their plea for him to be flown to the Pope’s children’s hospital in Rome.

Mr Evans said they would not be going to the Supreme Court today to pursue their Italian plan and said: ‘We got rejected yesterday to go to Italy unfortunately. We could take it further, but would it be the right thing to do?

Mr Evans insists that because his son is still alive it proves doctors misdiagnosed him.

He said: ‘Alfie doesn’t need help now. Some people say it’s a miracle – it’s a misdiagnosis. He hasn’t woke up and he is a bit weak but we ask to go home.’

Q&A: CAN ALFIE EVANS BE SAVED?

Can doctors end Alfie’s life against his parents’ wishes?

Alder Hey Hospital took Alfie’s case to the High Court and a judge agreed to allow them to end his treatment because it was not in his best interests.

The Court of Appeal, the Supreme Court and the European Court of Human Rights all rejected appeals by his parents, who believe they should have the final say on their son’s treatment.

Can the doctors change their mind and not turn off his life support?

Yes. Alder Hey could go back to the High Court to stop the order they fought for this year – but it is highly unlikely.

The process of gaining a Consent Order could be done on an urgent basis and completed in less than two hours.

Experts have told MailOnline this is the only way he could travel to Rome for treatment.

Can the hospital stop his parents taking him out of the country without permission?

Yes. If doctors believe that any parent will cause suffering to their child, police can be called in to arrest them using Powers of Protection legislation.

In the case of young cancer sufferer Ashya King his parents faced a European Arrest Warrant after absconding with their son who was in hospital.

Alfie has been on a ventilator so would require a team of medical staff to move him and his equipment.

If parents still refuse to accept treatment should be withdrawn, can the hospital end it anyway?

Yes. Police could be called in to facilitate treatment being ended if parents were violently preventing it – although it is highly unlikely this would happen. Doctors are more likely to try to ‘persuade’ parents to let it happen.

If the parties remain at loggerheads for a long period the hospital could go back to court for an injunction and ask a judge to set a deadline for treatment to be withdrawn.