Replacing your weekly hot yoga class in favor of a long, cold swim could make it easier to lose weight, new research suggests.

A new study from University of Tokyo has revealed that exposure to cold temperatures for long periods of time can improve the body’s ability to regulate blood sugar and increases metabolism.

The effects are the result of the stress that cool temperatures put on the body, ultimately adapting unhealthy fat so it can burn calories to produce heat.

The research team is now looking for ways to manually turn on the adaptation without cold exposure, providing a way for the more than 80 million overweight adults in the US and people who are unable to exercise to burn fat more easily. 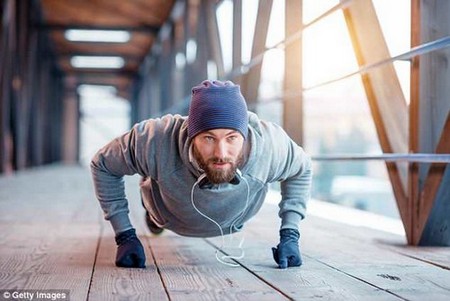 The exercise community has long been split on the question of the ideal temperature for workouts.

Many support methods that use high temperatures to increase sweat output, while others like Olympian Michael Phelps claiming that cool environments force the body to work harder to stay warm, burning more fat.

The study published last week delved into the qualities of different types of fat in an effort to answer the question of which temperature is best.

Brown fat is mainly found in newborns who use it to regulate their body temperatures before they develop the ability to shiver.

This fat is responsible for burning calories to generate heat and is not associated with health risks.

By adulthood, most brown fat is replaced with white fat, which insulates and cushions the organs.

Historically the body stored white fat to help humans survive in cold temperatures and to use as an energy source when food was scarce.

Today, however, humans store white fat even though food is readily available.

Having an excess of white fat is associated with America’s obesity epidemic, and can lead to heart disease, diabetes and many types of cancers.

In this recent study, researchers from Japan discovered a third type of fat called beige fat, which, like brown fat, works to break down fat and sugar to improve insulin sensitivity and increase metabolism.

This beige fat is a result of long-term exposure to cold temperatures that causes white fat cells to act more like efficient, calorie-burning brown cells through a process called thermogenesis.

After one week of being kept in a space at 39 degrees, a protein in the mice became altered, turning white cells into beige cells, which are thermogenic.

The researchers said that it would likely be possible to force the same transition without the cold stress.

They are now working on developing treatments for metabolic diseases based on genetic research.

‘Understanding how the environment influences metabolism is scientifically, pharmacologically, and medically interesting,’ said author Juro Sakai, an expert in the epigenetics of metabolism at the University of Tokyo.

‘Our next experiments will look more closely at epigenetic modifications within the thermogenesis signaling pathway so that we may manipulate it.’

Just one puff of cannabis found to reduce depression