Understanding and coming to terms with your sexuality at any age is very difficult. My initial reckoning with my sexuality came when I was around 11 years old, starting secondary school all the way back in 2000. It was a time when being gay was not widely accepted or truly understood.

I had an overwhelming feeling that I did not fit in. Suddenly, after growing up in a very sheltered village – remarkable for its lack of diversity – people started calling me ‘gay’, as well as many other words that do not deserve to be written down, day in, day out at school.

Believe it or not, I didn’t know what ‘gay’ even meant, and the next few years were not easy. To try to hide my identity and convince the bullies they were wrong, I had girlfriends, kissed girls at parties, and throughout my early teens I felt like I could not talk openly to anyone about how I felt. Not only did I think no one would understand, but I felt that I would be hated or marginalised for being who I was. Looking at mass media at the time there were no role models, there was no social media to find a community on, so I felt completely alone. 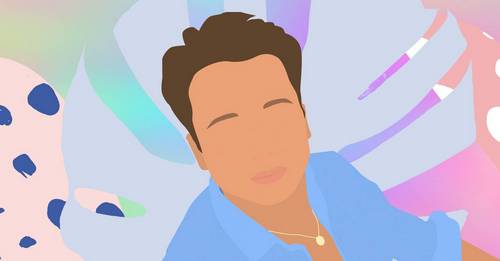 I responded by isolating myself. Outside of school, I spent lots of time alone at home and would make up elaborate excuses not to go to house parties because I didn’t feel safe in my own skin or safe in the knowledge of who I actually was. In any social situation I would look around and feel like I truly had not found my people. I didn’t feel like I had a community, or a place where I felt fully seen and understood.

The first person I opened up to was my best friend at the time – and my first ‘girlfriend’ in fact – Abigail, when I was 13 years old. We’d read a story about a gay boy coming out in the teen bible More! magazine. At the bottom of the article was a number to contact a helpline for young LGBTQ+ kids (even though I didn’t even know what this term meant, yet). We went to the village phone box clutching coins from our limited pocket money. As I kept popping coins into the phone, I was expecting answers to questions I couldn’t even really articulate and guidance for thoughts I was yet to understand.

It wasn’t the revolutionary, ‘oh my god, it’s OK to be me, I love me now,’ moment I expected. But I had taken the first step, I was talking, and I felt for the first time there was someone out there who wanted to listen – even it was a stranger. I can’t even remember what the person on the phone specifically said, but it was the way they made me feel. That’s the thing about talking: you won’t always remember what you said or what the other person did, but the way they made you feel.

During this time, I suffered from severe acne and felt like I was living behind an exterior that was fighting me at the same time as my internal feelings were. As a result, I started to experience extreme OCD, which resulted in me scrubbing my hands red raw until they bled, because I was so scared of germs. Looking back now, I realise this was my one singular control mechanism. It allowed me to feel in control of one aspect of my life while I just felt so confused about everything else. The OCD was a further source of embarrassment and another thing I couldn’t articulate fully or understand, as it wasn’t widely discussed at the time.

I wish I had realised at the time that the answers I needed were in fact in those around me, in my parents and my small selection of friends. I wish I’d spoken about my feelings sooner, which would have allowed me to reconcile with myself. Talking about the anxiety, self-loathing and confusion would have helped set me free, but I felt at the time there was no one who would truly listen. I felt that being me was the worst thing I could be – now I realise it’s the best thing I can possibly be. Being called ‘gay’ felt like a negative label, now it feels like a badge of honour.

My mum says to me now, “It would have been so much easier if you just opened up a bit more.” And she’s right, but equally I didn’t feel I was being listened to. The signs were there, but no one started the conversation. I truly believe it shouldn’t always be the person themselves who has to start the dialogue. In fact, when I came out aged 18 to her as she drove me to university, she said, “I’ve always known.”

In that moment I only wished she had said something much, much sooner. Anyone confused and feeling alone knows that sometimes you just need to be asked the simplest of questions, the ones that make you feel like they are truly there and ready to listen.

My job now allows me to meet some of the world’s most inspiring people and it’s taught me that the greatest cure is to talk, but equally, that the greatest power is listening. Listening to others opening up and sharing their internal struggles – from Perrie Edwards talking about her crippling anxiety to Queer Eye’s Antoni discussing how his sexuality has affected his body image issues – has ultimately taught me a lot about myself. All the stories I hear remind me that the path to being truly OK with yourself is a long and winding road, and the destination is only reached by feeling listened to by those around you.

So, this Pride month and beyond I ask you to reach out to those in the LGBTQ+ community, show up for them, shout for them but most of all listen to them. There is a massive misconception that you come out and you are automatically proud. Pride is something you have an ever-changing relationship with. Some days I feel prouder of my sexuality than others. Even now I need to reach out to discuss how my sexuality affects my life.

Writing this today I do feel proud of who I am – a gay man – but crucially, I feel seen, valued and listened to, not only by my immediate community of family and friends but by all the allies around me.

Be that ally to the person in your life and truly listen to that individual. Every single person’s experience is different and needs to be heard. A blanket approach to discussing sexuality and gender doesn’t fit all.

The way that women experience periods is completely different, but both are valid

As a trans non-binary person, this is my advice for supporting your friends when they come out