Aptly named after the Ancient Greek word for ‘Vision’, OMMA Santorini is a boutique 5-star hotel that opened just three months ago. Spend just ten minutes there, however, and you wouldn’t believe it – with welcoming, efficient staff who run the place with the ease and relaxed confidence of a team ten years into their tenure.

In the same way that Mauritius is famous for its stunning beaches, Barcelona for its striking architecture, and Italy for, well, the most delicious pasta, Santorini is celebrated amongst millennials as being one of the most beautiful – and therefore Instagrammable – places on earth.

And they’re not wrong. It has sheer, cliff-edge drops rendering every view an ‘infinity’ one, with the ocean visible from just about every spot on the island. It’s such a tall, thin expanse of land that, should you find a high enough peak, you’re treated to an entire 360 degree ocean-view vantage point.

But despite the undeniably breathtaking beauty of the entire island, there’s one spot that I’m officially dubbing the *most* aesthetically jaw-dropping… and it’s a brand new hidden gem. 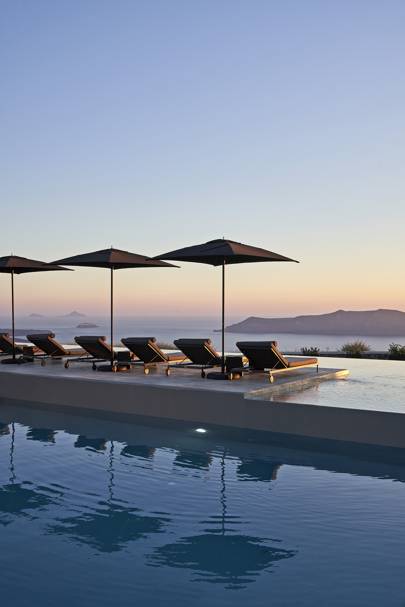 Perfectly situated in Imerovigli high on Santorini’s Caldera, you quickly understand the legitimacy of the hotel name as it becomes clear that the views are utterly unbeatable. Featuring the aforementioned 360 perspective, look one way as you sip your breakfast coffee on the balcony lounge and you’ll see the Aegean Sea, before turning your head to be faced with the vast Caldera from the front.

Thirty individually-styled rooms, suites and villas make up the hotel’s stunning accommodation, with options available for every end of the affordability spectrum. Villas – with their own pools, no less – overlook the Aegean and are woken by a stunning sunrise over the horizon, while the rooms and suites facing the hotel front end each day with the most mesmerising sunset over the Caldera. 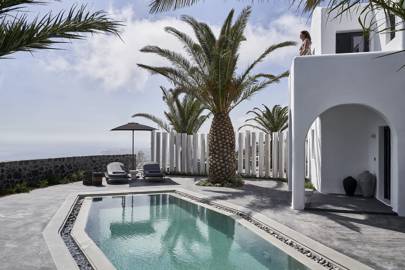 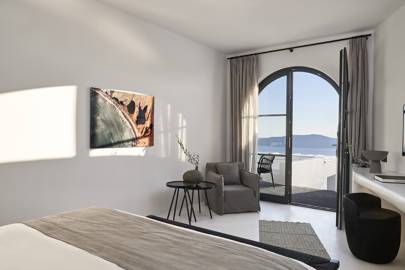 And while this multi-aspect ocean view makes for the most spectacularly beautiful, almost humbling experience, it also acts as a wonderfully versatile backdrop for picture-taking. Before you roll your eyes, acknowledge the significance of this in light of the fact that a recent WeSwap study discovered that 37% of millennials cite the ability to post beautiful images when they are on holiday influences where they travel to.

It’s not just the hotel views that you’ll be incessantly capturing either, as OMMA’s interiors are every chic minimalist’s dream.

Whitewashed walls are given character via rustic grooves, while arches that feel entirely organic introduce a new room or space without the need for a door. Everything flows, from the stunning stone basins which match the mirror frames, to the hanging bedside ceiling lamps in the same slate grey as the bed linen accents. 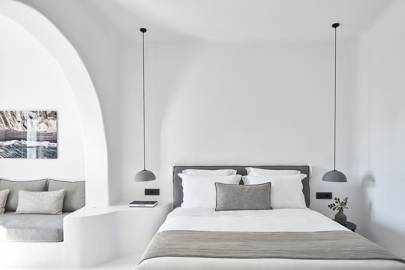 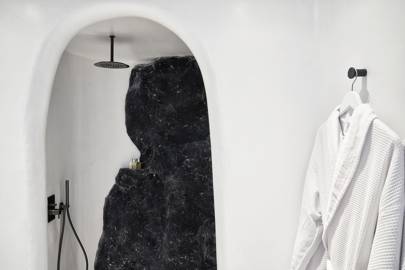 But perhaps the most beautiful aesthetic flow comes courtesy of the glass panelled front door, which from almost every type of accommodation offers a full sea view. One of the lucky guests, our vantage point was welcomely obstructed only by a small ‘infinity’ plunge pool on our balcony that encouraged the eye to skim over the turquoise water straight out onto the ocean dancing around the Caldera.

Now consider that that unbelievable view – complete with sunset – sits at the end of the bed, and you’ll understand why we struggled to resist the idea of room service all day, every day. Why venture anywhere else, when you have one of the world’s most perfect views quite literally at your door step?

I’m proud to say that we didn’t order-in once, despite the tempting menu. Instead we headed to the hotel’s restaurant, which admittedly was just 100 metres away at the other side of the hotel’s main pool (another infinity number, you couldn’t imagine one better) and headed up by the brilliant Executive Chef Dimitris Stamoudis. 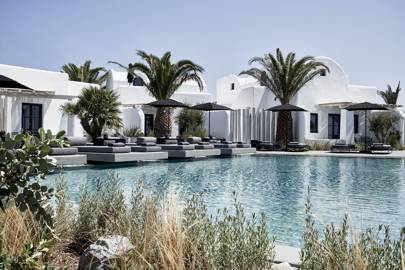 As a non-seafood-eater – shellfish allergy and total aversion to the rest of it – I find even remotely fancy ocean-view restaurants intimidating. You know they’ll have the very finest lobsters caught mere seconds before, and fresher fish than if you were to paddle out right now and snap one up yourself, but every time – as I smile and nod during the fresh fish spiel – I hope and pray that there’s at least one tempting meat dish.

Thankfully, while OMMA restaurant is of course bursting with enough fresh fish to more than satisfy my seafood-obsessed partner, there were several mouthwatering alternatives.

The ‘pastitsio’ starter, cannelloni pasta filled with beef ragout and smoked Naxos cream, was refined and indulgent, yet small enough to savour and encourage the appetite, while the beef fillet main – served with eggplant purée, roasted vegetables and an Italian desert wine sauce – was my idea of utter heaven and cooked to medium-rare-perfection. 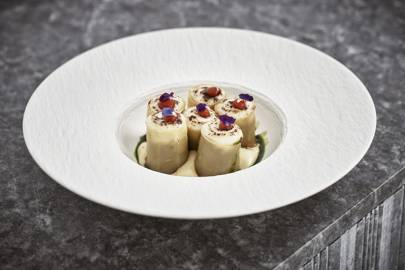 My partner’s steamed muscles and chilli shrimp that he had at lunch the next day were, apparently, of a similarly blissful calibre, and even I had to admit that they looked and smelled incredible.

And while consistently claimed to be ‘too full for pudding’ during each visit, the menu was too good to refuse. A yoghurt and white chocolate pavlova was a serious highlight, but the outright winner had to be our surprise warm cookies on the last night, just before we left for our flight, with sweet, personalised goodbye messages written out in icing. It was organised by the most brilliant and thoughtful Food Beverage Manager, Katerina, who’s love for a surprise saw her leave a little treat in our room to return to each night – from local sweet treats to beautiful fruit water and Greek teas.

In fact, the staff line-up is one of OMMA’s main highlights which, when you consider the panoramic ocean views and seemingly endless infinity pools, is pretty impressive. They leave such a lasting impression on you that you feel as though they’re regular friends you make on holiday – yes, we’re following each other on Instagram (the sure sign) – and ones you’ll genuinely miss when you leave. Katerina’s entire catering team were a delight, and can’t do enough for their guests – including bringing fresh fruit treats and frozen drinks around the pool every afternoon for sunbathers to sample.

Desi and Constantinos from the management team were also two of the loveliest people we’ve ever had the pleasure of meeting on holiday, always near and available should you have even the most niche request, and with memories good enough to recall every guest’s nationality/room number/evening plans/spa appointment off the cuff. 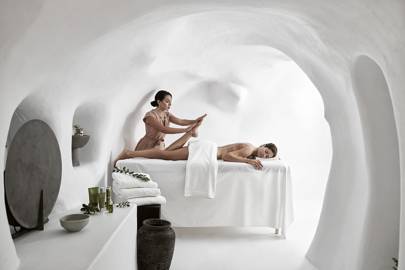 Speaking of the spa, you probably won’t be surprised by now to hear that it’s one of the most beautiful and brilliantly-run on the Island. Not only is it located just away from the pool next to a pair of wildly Instagrammable waist-height ceramic pots (#content), but even the space’s interior – candlelit stone and clean white walls – is crying out to be photographed. I had to actually tell myself to put my phone down and relax for 60 minutes.

Once I had, and my therapist began her full-body massage treatment, the ‘relaxing’ bit of course came very naturally. I didn’t lose that state of blissful zen until I stepped off the plane at Gatwick and returned to the central London tube network, nostlgically scrolling through the thousands of pictures I’d taken over the past five days. 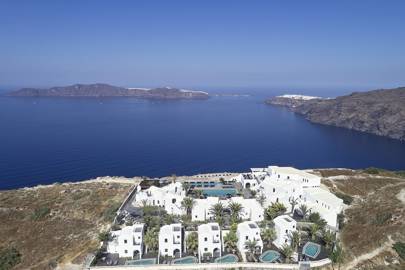 They say you shouldn’t judge a book by its cover, but I think at OMMA you can. Mind-blowing views, inspiring decor, heavenly food and beyond exquisite service. You’ll be seeing it on my Instagram feed for months to come.

I visited Nobu Los Cabos, the place to go for ultimate wellness

I spent a long weekend at Mazagan in Morocco