With the latest Marvel film set in 1990s – with the TLC soundtrack to match – we discuss dial-up internet and the pair share the cringe MSN Messenger names for their characters, Yon-Rogg and Doctor Minerva. Plus, Gemma reveals the struggles of getting up at 4am for makeup and Jude confesses just how long he can hold a wee in his Captain Marvel costume. That is some serious bladder control – it’s practically a superpower in itself…

Captain Marvel takes us back to the 90s. What’s the one 90s trend you wish you let go of sooner and what is one you’d love to resurrect?

Gemma Chan: I love that bum bags are back. I loved my Fluro bum bag I had in the 90s. Why would you not want to have all your bits and pieces here?

Jude Law: I think I held onto the ridiculous trainers for a bit too long. You know they got Fluro, they got insane and you’d wear them with everything, even with a suit, you’d wear your trainers. We’ve been talking shell suits, although I never rocked a shell suit. Gemma apparently had a shell suit in the 90s.

Gemma: Yeah, I wore a shell suit! You then discover they are really flammable, and I was being sent off to bonfire night, sparkler in hand, in a highly flammable shell suit! 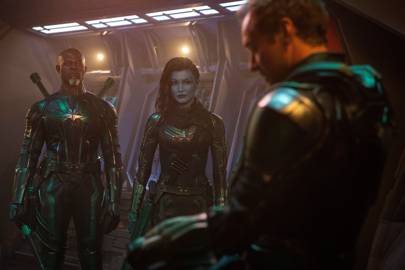 The dial up internet in this reminded me of when I was a kid with MSN. If you were going to create a cringe MSN inspired email address for your characters what would it be?

Gemma: That was my uni years. That was how we all communicated! Mine would be Blue bitch 93.

Jude: Commander dark and stormy – but how can I top blue bitch?! 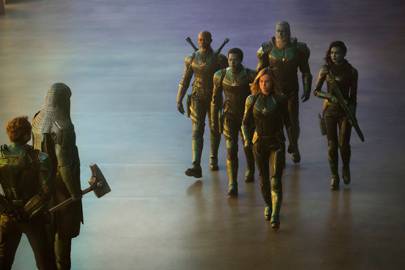 Jude, speaking of 90s icons, you bring out your inner Scary Spice in Captain Marvel. Where do you go to bring out the badass within?

Jude: Geri Halliwell, clearly. (UH OH, Jude doesn’t know his Spice Girls). The theme of this film is that there are no goodies and baddies. You spend most of the film on one side seeing their point of view and you just commit to that. It’s not until the film flips over and you realise things aren’t quite as we thought they were and that’s kind of great.

Gemma: I thought we were the good guys?!

Gemma, it took 4 hours each day to paint you blue. What’s the most niche thing you’ve done to pass the time in that situation?

Gemma: There’s not much you can do! You can’t sleep because you get woken up by cold jets of air in various orafices. You can’t listen to things because you can’t have earbuds in – it was tough! He (Jude) had it easy rocking up to work 5 hours after I got there.

Jude: I’m really sorry about that, I haven’t apologised yet. I wasn’t in on the decision making, I was just told I wasn’t blue!

Jude: The suits took a lot of planning because of toilet breaks. So, it’s very good for bladder control. A kind of zen bladder control. You would think, ‘I’ve got another two more hours I can do this!’

Captain Marvel is in cinemas now