Baby’s first food should not be mashed banana or rice, with parents advised to wean their children on broccoli.

Child food experts at University College London are advising parents to choose bitter vegetables such as broccoli, spinach or cauliflower as their baby’s first solid food.

They say baby rice, chosen by more than half of parents, is too bland and a ‘missed opportunity’ to make them less fussy eaters.

Fruits such as mashed banana are feared to give a baby an early sweet tooth and make them less open to trying vegetables later on. 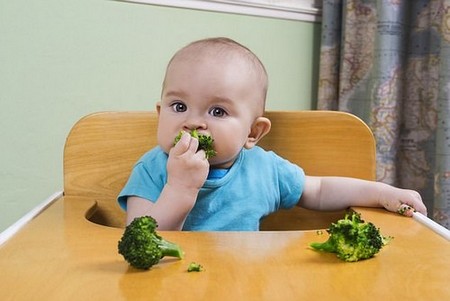 Dr Clare Llewellyn and Dr Hayley Syrad, who have researched baby eating habits for over a decade, want the first foods introduced to children at around six months to be bitter vegetables, as these are the foods most commonly disliked by children.

They say parents who attempt to give infants vegetables after starting them with fruit ‘may be disappointed’. Even if it takes 15 attempts with a vegetable to make children like it, studies suggest this strategy works to make children less fussy, healthier eaters.

The academics have written a book, Baby Food Matters, on what and how to feed children from conception to their second birthday, based on nearly 100 scientific papers and articles they have published on the subject (SUBS – PLS KEEP).

Dr Llewellyn said: ‘The most important thing when you introduce solid foods is to introduce the foods babies are more likely to reject. 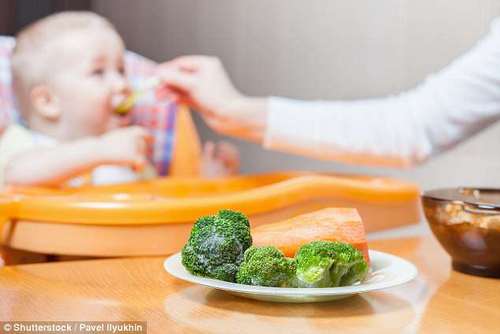 ‘If you introduce savoury foods, particularly the more bitter-tasting vegetables like broccoli and spinach which children often struggle with, or cauliflower which they are reluctant to eat, they are more accepting of those foods going forward.

‘If you start with sweet, delicious-tasting foods like fruit, who could blame children for struggling to enjoy vegetables after that? Weaning is a chance to introduce children to new flavours, not to help them develop a sweet tooth.’

Babies are most open to new flavours around the time they are weaned, with fussiness setting in after children reach around 20 months.

Evolutionarily it makes sense for them to like sweet flavours, as they contain the calories needed to grow properly, and to dislike bitter flavours, which could signal foods are poisonous.

But the experts say giving children vegetables early may help, with parents advised to give babies a new vegetable every day for five days, then to rotate them for the next 10 days.

Sweet potato, parsnips and carrots are advised against as they are too sweet, with steamed, mashed and pureed dark green vegetables recommended. The experts also say giving babies sour fruits, such as plums or cherries, may be best for deterring fussy eating.

Parents giving babies new foods should offer praise and smiles, or eat them at the same time – pretending to enjoy them if necessary. Just because children turn away or spit out foods does not necessarily mean they don’t like them, with the amount they eat a better guide.

A German study of 49 mothers who gave their babies a vegetable they disliked repeatedly found the infants eventually chose to eat more of that vegetable.

Baby Food Matters, which is published next Thursday by Yellow Kite, says health visitors often recommend baby rice or porridge but that these foods and rusks are too bland, to begin with for weaning.