Cities experienced 2.3 more assaults than average on days when hosting presidential campaign rallies for Donald Trump during the lead-up to the 2016 US Presidential Election, according to the first study of its kind.

Rallies in support of Trump’s Democrat rival, Hillary Clinton, however, were not linked to any increase in assaults, according to the findings.

The research, conducted by the University of Pennsylvania, follows media reports of violence during the time, and the authors suggest that aggressive political rhetoric may play a role in inciting physical conflict. 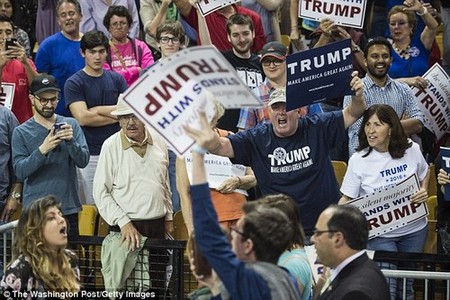 Trump’s aggressive rhetoric may have incited spikes in assaults in cities where he hosted campaign rallies in 2016, new research suggests

During the 2016 campaign season, Donald Trump held 137 rallies in cities throughout the US.

The then-candidates supporters thronged to the events – some estimates suggest that as many as 20,000 people attended at least one rally – where they could expect Trump to stir fervor with fiery rhetoric.

Social scientists and epidemiologists have long observed that large gatherings can act like a pressure cooker for violence. Often, close contact, excitability and alcohol brew up aggression, and spread like a so-called ‘social contagion.

But many observed that Trump rallies ratcheted the already-volatile crowd settings up a notch during his 2016 campaign.

Lead author Dr Christopher Morrison, a fellow at the University of Pennsylvania, said: ‘News media sources reported there were violent incidents at some campaign rallies, but it was difficult to gauge whether there really was a systematic problem, and if so, how many additional assaults were associated with each rally.

‘To prevent similar violence in the future, it is important to understand the underlying causes of this behavior, perhaps including the role that political rhetoric might play in normalizing or promoting violence.’

To try to pin that number down more exactly, the study authors narrowed their focus to cities of greater than 200,000 people, the team performed a systematic Google search and found publicly available data for 31 rallies in 22 cities for Trump and 38 rallies in 21 cities for Clinton.

Using assault figures from police departments in those cities, including aggravated assaults, simple assaults, and/or battery, the researchers counted assaults on the day of each rally.

For comparison, they also counted assaults on corresponding days of the week for four weeks before and four weeks after each rally.

Rallies in the study were defined as open invitation events that occurred after Trump and Clinton declared their candidacies in spring 2015 and before the US Presidential Election on November 8, 2016, featured a speech by Trump or Clinton, and were not on the same day as a party primary election in the same state as the rally.

When Clinton hosted a rally, there were no unusual spikes in assaults.

But on days when Trump came to town, a US city would see 1.12 times as many assaults, compared to the average of about 19.4 daily assaults.

Though this study is the first to aggregate and analyze general assault and battery reporting in rally cities, it is hardly the first to find an upward trend in violence during and following the campaign.

In January, a Columbia University study revealed a 20 percent spike in violent deaths among transgender people between 2016 and 2017.

More than 70 percent of the study’s subjects also reported feeling more anxious and less safe since the 2016 election.

During the campaign, Trump promised to ‘fight’ for LGBTQ rights, but critics have questioned whether his policies have accomplished that goal.

Violent language may have affected the mood and behavior of rally attendees, as well as those exposed to the rally through news reports and social media
Dr Douglas Wiebe, senior study author and U Penn professor of epidemiology

But words like ‘fight’ were common in his campaign rhetoric, as the University of Pennsylvania study authors point out.

During a Cedar Rapids, Iowa rally, Trump said he would ‘knock the crap out of’ anyone who came out to protest against the event, they note.

This sort of language figures into the researchers’ two theories to explain their findings.

Firstly, all additional assaults could have occurred in and around the venues of candidate Trump’s rallies where people invested in the process gathered. This explanation is consistent with news media reports that violence occurred at these specific locations.

Secondly, additional assaults that took place might have occurred elsewhere in the rally cities.

The researchers said that studies informed by theories of ‘social contagion’ find evidence that emotional states can be transmitted through news reports and social media, which could have led to more assaults occurring away from the rally sites.

They noted that Trump rallies were widely broadcast and discussed through news reports and social media, increasing the possible spread of a violent social contagion.

Study senior author Dr Douglas Wiebe, an associate professor in epidemiology at Penn, added: ‘This research provides evidence that this increase in assaults is associated with candidate Trump’s rallies leading up to the election.

‘Violent language may have affected the mood and behavior of rally attendees, as well as those exposed to the rally through news reports and social media,’ Dr Wiebe said.