County Lines is a gritty and very real drama which follows a 14-year-old boy, Tyler, who is groomed into a ‘county lines’ criminal network to distribute drugs, convinced it will help his single mother, Toni played heartbreakingly by Ashley.

The film sheds light on the ‘county lines’ practice used by gangs who target vulnerable teenagers from large cities that tend to be absent from school or come from an unstable family, to embark on train journeys to ship drugs from smaller counties to the larger cities, thinking it is a discreet method of trafficking. The reality of this is shown brutally on screen with Tyler even hiding drugs in his body whilst he becomes indoctrinated by the gangsters he comes into contact with, even replicating the violence he witnesses by attacking his mother.
I first met Ashley Madekwe just over a year ago in a bustling London hotel bar to talk about her latest movie, County Lines which was showing at the BFI London Film Festival later that night. Little did we know at that time that the simple idea of being surrounded by so many people or even the small matter of a red carpet would be pretty impossible one year later.

Let alone the dreaded c-word: Covid 19. But one thing is consistent as County Lines finally lands on cinemas and on-demand, the subject matter continues to speak to Ashley, who grew up on a council estate in South London, in a profound way. 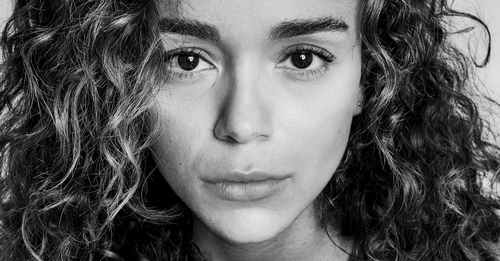 The gritty and dramatic performance Ashley gives, is a long way from flashy glam of TV show, Revenge where Ashley broke into Hollywood – something she tells me even Mariah Carey was obsessed with. Now, as Ashley receives a nomination for Best Supporting Actress at the prestigious British Independent Film Awards, I catch up with her from her LA home which she shares with her husband, Peaky Blinders star, Iddo Goldberg, which she says is like living in a “kind of limbo,” while in lockdown. Here, Ashley opens up about slaying her career for “South London Ashley”, the racism she has faced, protesting as part of the Black Lives Matter Movement and refusing to be labelled as “difficult,” for simply speaking her mind…

As County Lines finally hits cinemas how much more special does this role feel to you?

I think I still feel incredibly connected to it. I feel really connected to Toni. I just re-watched my self-tape that I did for Henry (Blake – County Lines’ director) to get the role just last week and I immediately felt those feelings again because she does really resonate with me and the world she lives in. I see her and I know that woman. I’m at the stage of my life where me and my husband are talking about when we’d like to have a family and I am tapping more into the idea of what it means to be a mother for myself so she resonates more with me like that but she also just breaks my heart. Whenever we were on set Henry kept saying, “this is really happening to people, you really have to go there because as bad as you feel now, they feel worse.”

I find it really crushing and frustrating when I think about the economic implications for people in lockdown. I am one of those people who, luckily, when I was told to stay home, I could stay home. Most people are not in that position. When I watch, here in LA, the mayor go on TV and implore people to stay home, on one hand I get it and on the other hand I find it really frustrating because people cannot physically afford to do that. Some people were like Toni and in Toni’s position and I can’t even imagine what that is like.

We’ve all had to really sit with ourselves this year and the social movements have been so powerful. How transformative has this year been for you?

I think my political and social awakening has gradually grown over the past 10 years that I’ve been living in America. Living here, I’ve been confronted with race and the issues of race more than I was when I was in England. Although I do know that in England, there is also that awakening happening now, or people getting more socially involved, for me here in America I saw the disparity. It’s just unfair. There are two systems here in America and I don’t think I was as aware of that. You don’t you have to come out of the womb being socially aware – that’s fine – but you grow with the world and then you become more woke to your surroundings. Moving here has definitely done that for me. Then with the Black Lives Matter protests you couldn’t look away. We definitely went out on the streets and my husband is a photographer, so he was capturing it and I was protesting.

What meaning did protesting take on for you?

Protesting for me was a strange mix of hope and hopelessness at the same time. It’s hopeful that so many people are speaking up for what they believe in, but also there’s a hopelessness because it’s like, wait, it’s come to this? All we can do is go out on the streets and congregate and hold signs? It’s hard to feel like what you’re doing has any meaning. But in that respect, I just wanted to, I wanted to lend my body to the crowd. I wanted to be counted within that crowd.

I grew up in inner city, London so I never felt like I was at a minority and I’ve been living here now for 10 years. I had the innocence of youth in England. But I’m more in tune to what I see to be institutionalised racism in England. Here in America, I think that the history of slavery and the Jim Crow law (that enforced racial segregation) is in living memory. That’s why I think it’s really poignant and it was really tangible to me. I was shooting in Nashville last year and I was within driving distance of the Memorial for Peace and Justice, which is the slavery Memorial that they have in Alabama.

I went and I wasn’t prepared for how viscerally emotional I would feel being there. It just floored me. You walk in and see these metal structures and each one of them represents a county where lynching took place and it goes pretty far. It floors you because it goes on and on. It’s heart wrenching and they have very human stories written down. Like, this guy was lynched for looking at a white woman or this person was accused of doing something he hadn’t done. It made me feel angry. It made me feel disgusted. It made me feel sad. It just feels like it’s very on the surface here.

What have those experiences taught you about the racism you faced in the UK?

I realised that I swallowed some things down. I only kind of remembered recently that in my final year of drama school, one of my final roles was called ‘the naked black slave.’ Now you could never approach me to tell me that was the role that I was going to play. At the time I remember being mildly angry about it, but also being like, ‘I’m at drama school and I kind of have to. I have to pay the part. I have to do what I’m told.’

It’s ludicrous to me that anybody thought that was okay to say to me. I also I didn’t want to be naked and the director’s solution was to put me in a burka so you couldn’t see who I was. That was one of my final year plays at drama school where you’re supposed to use this as a platform to meet people in the industry and get an agent. But I was just completely covered in a burka because I wouldn’t be naked. Crazy.

What has your relationship with labels and labelling been like?

I was always scared of being labelled as, ‘difficult.’ The worst thing for any black woman in this industry to be termed is ‘being difficult.’ I think people use that word to keep women down in general, too. You don’t want to be seen as difficult when really what you’re being is assertive or advocating for yourself. I do know that I have been guilty in the past of being on set and tempering my feelings or my opinions about a scene because I don’t want to be difficult. That’s something I have to work on. I also think there’s an idea of me that isn’t who I am – but maybe social media feeds into – that I’m more glamorous than I actually am!

What have been the turning points in advocating for yourself?

I think that my experience in the TV show Salem was one of the times where I think that I didn’t advocate for myself in a way that was helpful. Now when I look back, there are things I would do differently with a lot of issues that I had there. My part in that show was someone who was a woman of colour who was integral to the historic story and I often felt that she was used as a prop. I don’t think I knew how to properly speak to people about what I wanted for the role and how I saw the role. Sometimes I think it’s not my job to say anything and it’s just my job to say the lines. But although the director is the director and the writer is the writer, I think the actors should still be able to express how they feel about something because we just want to tell the best story at the end of the day.

Do you think that imposter syndrome has a part to play in that and how have you overcome it?

Absolutely. I’ve definitely suffered from imposter syndrome a hundred percent! I think that making sure that you have the vocabulary within yourself to speak up. I come from South London. I grew up being very direct and sometimes I speak in a way that can sometimes be construed as being aggressive but that’s not my intent. I’m guilty of it in my own home with my husband and he will say, ‘Why are you talking to me like that?’ And I am like, ‘this is normal. This is how I speak.’ I am just working on ‘the South London,’ and working on communicating in a way that isn’t aggressive. But when I have to be it’s there within me, it’s always at my disposal, South London Ashley.

Do you feel like you’re out there doing this for ‘South London Ashley’?

I think so. Sometimes I do get that nostalgia. You know, when you think about yourself as a kid or a young person with hopes and dreams. Often my husband, I think has it too. We often say to each other, ‘wow, can you believe that we’re here? Can you believe this is happening?’ We moved here 10 short years ago with a suitcase, a cat and not much else.

The Absolute Best Sunscreens to Protect Your Tattoos From Fading