The statistics around violence against trans people in the world today are staggering, with the majority of these attacks happening to Black and Latinx trans women. Seeing someone targeted is often a triggering reminder of how far we are from safety as trans people.

However, there was also a lot of positivity to be taken from Elliot’s post – droves of people congratulating him, using his correct pronouns and name immediately and welcoming him to the trans family – drowning out the hate with love. It has made me think back to my own coming out, aged 37, just over a year ago, and the things my friends did for me to make me more comfortable.

This week actor Elliot Page posted a note on Instagram and Twitter, announcing that he was trans, that his pronouns were he/they, and that he had taken the name Elliot. It was a moment of great celebration for the queer community that Elliot took such a personal moment to highlight the dangers against people less privileged than him, and pledge to fight for their safety.

But it was also a moment of tension, as many were also fearful of the ensuing jokes, hatred and the invasiveness that so often accompanies the coming out of a high profile trans figure. 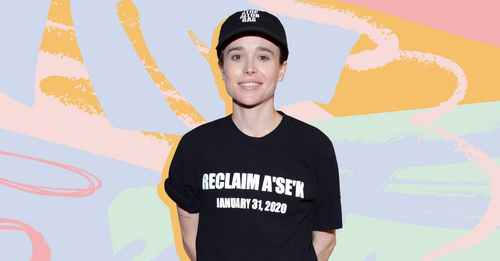 It sounds ironic, but almost as soon as I had come out as trans non-binary, I didn’t want to talk about it anymore. I wanted to skip past the questions, many of which I had agonised over myself before coming out. I wanted to avoid announcing my pronouns. I wanted to jump to the end with my revised identity firmly set in the status quo. This was thankfully respected by the vast majority of friends, family and colleagues.

I changed my name in my email signature, and added my pronouns and saw other cisgender colleagues doing the same with their pronouns; a move of solidarity which meant that I wasn’t the only person declaring how I like to be addressed. Around this time, several of my friends would send screenshots of my contact in their phones, showing my new name. I can’t properly explain how moving this was to me, it was a quiet, non-invasive show of support and acceptance that I treasured.

What I was looking for in the time following my coming out publicly was normalisation. I felt incredibly stressed in the lead up to it, worrying about not being able to take it back if people reacted adversely, about uncomfortable questions or focus, and about constantly having to justify the things I was asking of people. I just wanted to get back to normal as soon as possible, but there had been a change, and it took a while afterwards for me to find comfort in my identity. One of my most treasured memories of this time was an email exchange with a Beauty Director.

I had recently written to her regarding the first time I had worn lipstick outside my flat, how empowering it had been. She wrote back acknowledging the momentousness of the occasion, recognising how symbolic lipstick can be to AMAB (assigned male at birth) trans and non-binary people, but then she immediately asked what colour and make of lipstick I had chosen.

To be able to note the seriousness of the event, but then easily shift into normal girl talk was incredibly valuable to me, and exactly what I needed at the time to take the pressure off. I had been nervous about talking to a cis woman about cosmetics, and she expertly skipped past the awkwardness into a setting of total acceptance and support.

I know for some people, this can feel an insurmountable topic. Whether this is a generational gap, or just that you’ve never encountered trans people before; it can feel that there’s no easy way into educating yourself, and the worry of offending or causing harm by using the wrong terminology or pronouns or asking an insensitive question can be paralysing. In my case, when the question comes from a genuine place of educating themselves then I’m quite happy to answer the question – there has to be a degree of leniency on both sides between cis and trans to have patience with each other if we want to move forward. Obviously if there’s malice involved in the question I have to be able to walk away from it. I’ve been lucky that I haven’t had many of these questions but many of my friends have had to go through.

If you don’t know a trans person or you’re uncomfortable asking questions, the good news is that there are numerous charities and organisations that have foreseen this, and can help you in your education.

Organisations like Gendered Intelligence and Mermaids have a wealth of resources covering the basics, right through to more in-depth information for trans people and their friends and family. If you’re more of a social media learner, there are a myriad of different creators who regularly post informative content for beginners and activists alike; follow Jeffrey Marsh, Matt Bernstein or the inimitable Shon Faye. Familiarising yourself with the issues that affect your trans friends is a fantastic start to supporting them.

For me personally, there are two core ways to make things easier: Normalisation and Familiarisation – I’d love you to know about the issues the issues that the trans community fact, but more than anything I want to to be able to get on with my life without facing negativity – just as many cis people do every day.

2020 is not the year we should pretend never happened

The beauty industry is in a political sexism crisis