A soldier who lost her ear will get a new one – once it finishes growing under the skin of her forearm. Private Shamika Burrage lost her entire left ear in a car accident in 2016 when she was just 19.

In a rare and remarkable procedure, Army surgeons at the William Beaumont Army Medical Center in El Paso, Texas, have recreated an ear for Burrage out of cartilage, and tucked it into her arm to finish growing.

Soon, the ear grown in her own body will be transplanted to the left side of her face, where Burrage, now 21, will even be able to feel her new appendage.

In 2016, Burrage and her cousin were driving back to her post in Texas from a visit to family in Mississippi when one of the car’s tires blew out.

Behind the wheel, Burrage stomped on the brake and remembers looking with concern at her pregnant cousin next to her.

They skidded off the road for 700 feet and the vehicle started flipping.

‘I just remember the first flip and that was it,’ Burrage told Army.mil.

Burrage was thrown from the car, bashing her head against the pavement and fracturing her spine in several places.

Her body tumbled and slid on the pavement, leaving her with road rash, and completely destroying her left ear.

The soldier came to on the ground, looking up at her pregnant cousin who was standing above her, looking remarkably unscathed.

‘Then I remember people walking up to us, asking if we were okay and then I blacked out,’ she said.

When she next opened her eyes, Burrage was in the hospital. She had lost her ear and a lot of blood.

Doctors had to reopen her ear canal, which had been damaged during the  crash.

If she’d been on the roadside for another half hour, she probably wouldn’t have made it to the hospital alive.

Burrage was alive but deeply shaken by the accident.

She spent several months in physical rehab, and started seeing a counselor.

The crash and her injuries were traumatic for the young woman, and every glimpse in the mirror was a reminder of those horrific moments.

‘I didn’t feel comfortable with the way I looked so the provider referred me to plastic surgery,’ Burrage said. 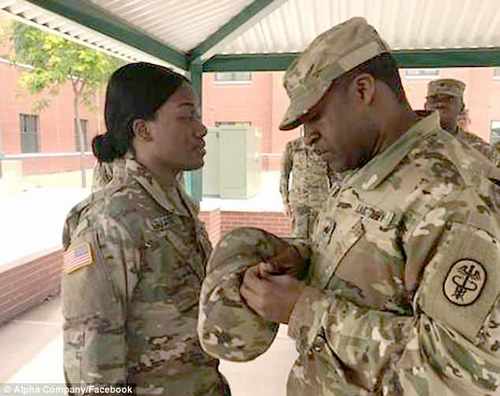 Burrage is just 21, and was promoted last month during a ceremony at Fort Bliss where she serves as a supply clerk (pictured). Burrage’s missing ear reminded her of the traumatic crash

She could be fitted with a plastic prosthetic ear or she could have one reconstructed.

‘I didn’t want to do the reconstruction but gave it some thought and came to the conclusion that it could be a good thing,’ she told Army.mil.

‘I was going to go with the prosthetic, to avoid more scarring but I wanted a real ear.

‘I was just scared at first but wanted to see what the surgeon could do.’

Her surgeon, Dr Lt Col Owen Johnson III encouraged her to have the reconstruction.

‘She was 19 and healthy and had her whole life ahead of her. Why should she have to deal with having an artificial ear for the rest of her life?’ he said.

Together, he and Burrage chose a procedure that would not only give her a new wear, but cover some of the scarring to the side of her face.

To give Burrage a new ear, Dr Johnson, chief of plastic and reconstructive surgery at the William Beaumont Army Medical Center in El Paso, Texas, first harvested cartilage from her ribs.

The cartilage was then shaped into an ear in a first-of-its kind effort for the Army.

Meanwhile, the plastic surgery team expanded a segment of skin on Burrage’s forearm to make room for the precious cargo she would soon carry there.

When enough room had been made, newly-molded ear was surgically placed under the skin flap.

The body, recognizing its own tissue, then encourages the growth of new blood vessels and even a nerve in the fledgling ear.

‘The ear will have fresh arteries fresh veins and even a fresh nerve so she’ll be able to feel it,’ said Dr Johnson.

As an added bonus to the reconstruction, the extra skin stretched on her arm will cover the scar tissue by Burrage’s jaw.

Making her an ear from scratch has taken more than a year but Burrage now has just two more surgeries to go.

‘It’s been a long process for everything but I’m back,’ said Burrage. 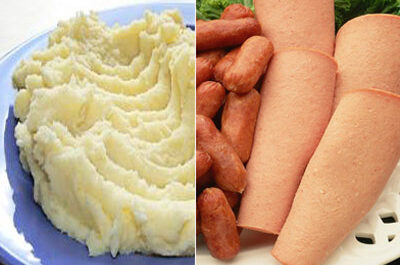 Separate food: a myth that helps to lose weight

Here’s what’s causing your indigestion, and how you can get rid of it