On “The Light Is Coming,” a man can repeatedly be heard in the background yelling something along the lines of, “You couldn’t let anybody speak.”

Once you really pay attention to it, it’s actually impossible to focus on any other aspect of the song, even Grande’s peppy cadence or Nicki Minaj’s confident rap verse.

Ariana Grande’s heavenly voice brings the light on her latest single, but a particular sample seems to be casting a shadow for many listeners.

As it turns out, the sample on the Pharrell Williams-produced track, as discovered by MTV News editor Madeline Roth, is taken from a CNN clip of a man screaming at former Pennsylvania Senator Arlen Specter during a 2009 town hall meeting on health care.

Funnily enough, Pharrell sampled a different part of the clip for N.E.R.D’s “Lemon.” On the bright side, at least it makes the song memorable. .. right? 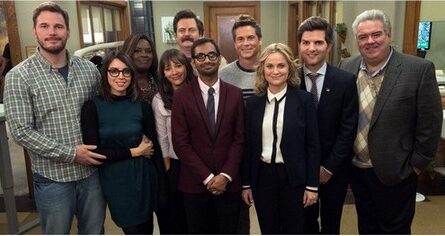 See What Your Favorite Parks and Recreation Stars Are Up To!

This £6.50 hyaluronic acid serum sells one every three minutes, so what’s all the hype about?

Meghan Markle Has Been Sporting This Signature Look Since Her Wedding