Heather Hendershot’s Apple Watch may well have saved her life.

The device started beeping at the 25-year-old mother last month, notifying her that her resting heart rate was abnormally high.

Hendershot had always been healthy, so she figured her watch most be malfunctioning and dismissed the alert.

But when the beeping persisted over the course of the next 24 hours, a trip to the hospital revealed that the Watch was accurately detecting that she had hyperthyroidism which was driving her heart toward a potentially deadly arrhythmia. 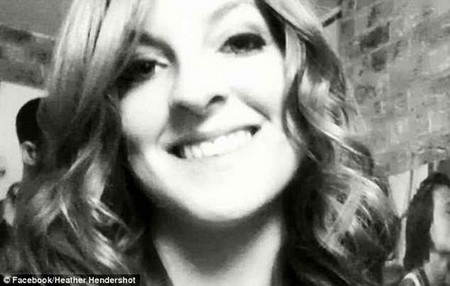 Heather Hendershot, 25, thought her Apple Watch must be defective when it said her heart rate was too high, but it correctly identified a symptom of her undiagnosed hyperthyroidism

Like most people, Hendershot bought her Apple Watch in the hopes that it would help her get healthier by tracking her progress, not so it could diagnose anything wrong with her health.

And she had no reason to think it ever would. Hendershot is young, sailed through the birth of her first son with no problems four months ago, and has never had any health issues.

That is the problem with hyperthyroidism, though: it can easily and often masquerade as another condition, and its early symptoms may be subtle things like overactive reflexes, warm, moist skin and slight tremors in extended fingers, according to the Mayo Clinic.

In fact, because a baby relies on its mother’s thyroid hormones, pregnancy itself can cause similar symptoms to hyperthyroidism.

The condition – which women are also at risk for for the first year after childbirth – would not necessarily be obvious during pregnancy, and requires a blood test to confirm it as the cause of mild symptoms.

But there was nothing subtle about the Apple Watch’s alert.

Last month, Hendershot and her husband at their home in Scranton, Kansas, watching television from their couch one evening when her wrist started blaring. 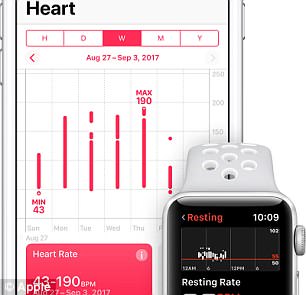 The watch alerted her that her heart rate was elevated, but ‘I thought, “maybe the watch is a little off or something,”‘ Hendershot told Today.

She had good reason for thinking that, too.

When Apple announced that the newest iteration of its wearable would come equipped with heart rate sensors and the ability to alert its wearers to abnormalities, many doctors were skeptical.

They worried that the device would be inaccurate, and sound the alarm on false positives, ironically raising heart rate sand posing health risks due to stress.

But a Stanford University study gave the Apple Watch’s built-in EKG technology top marks earlier this year, much to the surprise of many experts.

In Hendershot’s case, it proved its worth, continuing to alert her three more times, when her heart rate hit 110 beats per minute (bpm), 120 and eventually 140bpm – well about the 40-60bpm range for a healthy adult woman’s heart.

Her husband put the watch on his own wrist, to see if it would say he too was in distress.

No alarms went off. Cody wasn’t going to take the risk that the watch was wrong when his wife wore it, but right when he did. He persuaded Hendershot to go to the emergency room.

There, doctors ruled out other causes of her heart arrhythmia, called an atrial fibrillation.

After blood tests, they confirmed that Hendershot’s thyroid was working overtime, producing too much of its hormone and driving her heart rate through the roof.

Hyperthyroidism is common, affecting about 12 percent of the American population.

When Hendershot’s watch kept going off and displaying increasingly higher heart rates, her husband, Cody (left) convinced her to go to the hospital, where her condition was diagnosed

What is uncommon is to go 25 years without noticing a single symptom, according to the physician that treated Hendershot, Dr Alan Wynne.

‘That’s what really stood out most strikingly to me. I have been doing this for 27 years – I am pretty sure this is the first time,’ he told Today.

Her thyroid condition can also cause unusual sweating, weight and hair loss and diarrhea because the thyroid hormone plays a key role in the body’s regulatory system.

So when too much thyroid hormone is pumped into the body, everything goes into overdrive.

Hyperthyroidism is very manageable, but because Hendershot had likely gone a long time without any medication, she was at risk for a so-called thyroid storm.

So the doctors even kept Hendershot in the intensive care unit overnight, carefully tracking her heart rate and blood pressure.

She is now back home with her husband and newborn, but is still untreated.

Hendershot will have to undergo testing to determine the cause of her thyroid condition – which is Graves’ Disease in 80 percent of cases, but can also develop within the first year after a woman gives birth.

In order to accurately diagnose Hendershot, doctors will have to wait until she has stopped breast feeding.

In the meantime, Hendershot now trusts her watch to let her know if her thyroid acts up and told local news station CW39 ‘I will not take it off.’

I’m on a mission to stop menstruation and women’s health being blacklisted topics, who’s with me?