GLAMOUR was lucky enough to make the trip to Malta earlier this month to celebrate the fourth year of Annie Mac’s very own festival, AMP Lost Found. It got summer off to a soaring start by kicking festival season off with the most amazing weekend of music, weather and beauty-inspo.

We were totally spoilt for choice with the line-up featuring a huge variation of the world’s best DJs and acts, including Jamie XX, Four Tet, Diplo and J Hus. AMP Lost Found makes a huge change from your standard British Festival; no wellies, no rain, no tents – just the gorgeous Mediterranean sun, an incredible castle-rave and glitter for days.

We caught up with headliner, radio-hero and hair-goddess, Annie Mac, about all things, beauty, festival-survival and Malta. 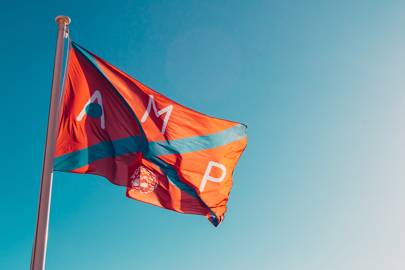 What’s been your pre-festival beauty regime?

Topping up my spray tan as a priority and I’m getting my eyebrows microbladed for the first time ever, which is just changing my life. The idea of not having to fill in my eyebrows every day is just like, the best thing ever.

This my new thing now, as I’m getting older I’d rather do stuff like that and not worry about my eyebrows for years. I’m also getting lash extensions, because it saves you having to put mascara on on a hot day and they last for like a month – so it’s just perfect.

What would you are the three most important things to pack for a festival abroad like AMP Lost and Found?

Phone charger, essential. You don’t want to lose your mates. Portable if possible, one that you can plug in a wall at night and bring with you during the day.

Adapter. Anything like shades and stuff, you can buy at the airport. You need to have the technical essentials in order to be a happy person at two in the morning.

You need a good face wipe situation. You know, I wouldn’t trust that you could get that in Malta.

So you’ve got your wipes, you’ve had your brows and lashes done. Are there any other beauty products you couldn’t go to AMP Lost and Found without?

Always use a foundation – MAC face and body foundation, no matter what. I mix that with MAC strobe cream and then plaster my face with it and it gives your face a really nice and subtle highlight.

Also, my friend Jules Von Hep, who usually does my fake tan, has just started his own line of fake tan that you can get in Boots ‘Isle of Paradise’ and that’s sick. It’s got this little bottle, which is self-tanning drops and you just mix the drops into moisturiser and put in on your face. So, that gives you a really good tan base and it last like four days. I just think when you have a really good tan, it cancels out a lot of insecurities.

17 of the best fake tans for golden holiday skin

So you’re all for the fake tan?

All for the fake tan. I’ve got more sensible in my old age. I went for a facial and this lady was like “clearly you need to deal with your sun spots”. And I was like “really, I would have just liked you to massage my face and make it feel nice”. She said that you should wear factor 50 whatever you do. So I do now, and I’m all about using fake tan.

Very sensible. So, when it’s the morning after a big night what do you do to get ready for day two?

First things first, I’ll have a Berroca. I’m a big BIG fan of electrolytes. So, I down a Berroca and I would try and eat something – I eat SO many bananas I worry sometimes that it’s unhealthy. I would bosh two Advil and just keep hydrated with loads of water and loads of Berroca. And when it’s a reasonable time, I might have another drink – maybe a Bloody Mary, just to take the edge off. But, you have to be careful with that because if you get into solid drinking again – then you’re in trouble, so I’d just have one.

Does the festival season have a knock-on effect on your skin, your body, your health, mind? How do you detox afterwards?

It’s about making sure it’s never too full-on, because I have a full-time job in the week, I have to really change how I approach it now. I do way less gigs, and if I do festivals on a Saturday, I’d always make sure my Sunday is clear.

What would you say is your best festival memory?

OMG, that is SO hard. I did a gig at the Silver Hays stage Glastonbury about three years ago and it was kind of against all odds. I hadn’t had any sleep the night before, I was parked right behind a tent and had no sleep all day. But, it was really REALLY emotional and amazing because it felt like the entire crowd was really behind me. I actually shed a real tear (probably because I hadn’t had any sleep) but it just felt overwhelming in a positive way and it was just one of those gigs where everything went right, everything worked really well and positively.

So, I have to follow that up with… what’s your worst festival experience?

Years ago, when Global Gathering was still a thing, I played on the main stage and it was my first gig back after having my first kid. I was still kind of big and still wearing my pregnancy wear, so I was wearing this tent dress I’d got from ASOS. I was behind the decks so you could only see from my waist up. But, halfway through the gig a biblical storm happened, and in about ten minutes, the sky was black and there were just buckets of rain. I probably lost about two-thirds of the crowd because they all just ran for shelter. The rain was coming down so hard on my decks that we were having to wipe down each deck with a tea towel whilst the other deck was playing.

The worst thing was that it got really windy and my dress kept blowing up. So I was trying to hold my dress down with one arm and DJ with the other and there were loads of people behind me so I was totally aware that my knickers were on show. My manager ran onto the stage and was holding my dress down and then my tour manager came round with gaffer tape and had to tape my dress to my thighs while it was pissing rain and the whole crowd were running away.

What are your anthems for Summer 2018?

There’s a track by Denis Sulta who played for us in Malta, a Scottish guy who is becoming really popular. His track is called D.K.Y and it was something I actually played all last summer but it’s only just come out now and I feel like a lot of people are just discovering it. 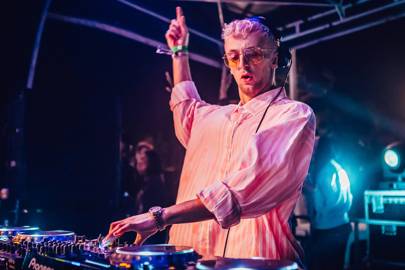 We’ve seen a rise of female DJ’s over the last few years, who are your favourites and who should we look out for?

I love a girl called Jayda G – she is so fun to watch, she plays everything from old R&B records, to disco and house. She’s one of those DJs that gets so into it, she dances like a crazy-woman; she’s really fun to watch and infectious.

A DJ called Peggy Gou plays amazing music and is also a wonderful producer. The Black Madonna is a firm favourite, she has insane breaths of knowledge when it comes to music; she will play anything from vintage hip-hop to classic jungle to the latest unrelated techno. She is one of these people who will take you on a journey, she’s really unpredictable in an exciting way and can totally flip the mood.

Monki is a long term friend – someone I’m a big fan of. I’m excited for Monki’s future as a DJ.

Rashida Jones on her lifelong journey with self-care

Victoria Beckham reveals daughter Harper ‘can contour like a professional’