Like the play, the film adaptation, starring Annette Bening as the narcissistic and delusional Russian stage actress Irina Arkadina and Saoirse Ronan as the young local who falls in love with Irina’s famous novelist boyfriend (Corey Stoll), takes place at Irina’s well-worn family country house outside of Moscow.

Musky found the perfect location in the picturesque Arrow Park Lake and Lodge in Monroe, New York, just a 90-minute drive from Manhattan. Now a wedding venue, Arrow Park was once a Russian cooperative that Musky’s family actually belonged to in the 1970s. “It was basically a Russian socialist camp,” Musky says. “The FBI would be camped outside the entrance. We called it the Russian Farm.”

An interior shot from The Seagull 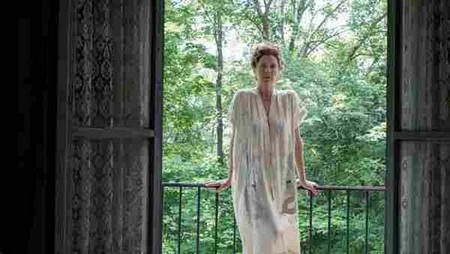 The estate, built in 1909 by Schuyler Schieffelin and his wife Julia Cooper (it was sold to the American Russian Organized Workers in 1948), boasts a 15,000-square-foot Italian villa, landscaped grounds. and a pristine lake. “When I first saw it, I almost couldn’t believe the setting and how apt it was for what we were doing. It did give me a kind of chill driving up and seeing Russian statues outside,” Bening says of the setting where she took on the role of Irina. “I remember we had a champagne get-together on the terrace or, as we say in the Midwest, the porch, the first day. We had a little ching-ching. It could not have been more inspiring really. It was perfect.”

While Annette Bening and her co-stars (the film’s ensemble also includes The Handmaid’s Tale’s Elisabeth Moss) didn’t use Russian accents, Tony-winning director Michael Mayer didn’t change the location of the story. “The house is beautiful,” Musky says. “It’s all beamed ceilings and tile work in the hallways. We just had to romanticize it more because it had become sort of a sterile catering kind of place. So we took everything out of the house. It was basically a redecoration.”

Walls were painted and furniture was sourced from staging companies and flea markets, but structurally the house remained the same.

She sourced furniture and accessories from Eclectic Encore Props in Long Island City as well as local flea markets and antique shops near Arrow Park. “It had to all look sort of oozy and comfy,” Musky says. “We had bear skins that we found at a flea market and beautiful tapestried fabric from the prop house. Just kind of layered and layered.”

When it comes to specific rooms, Irina’s bedroom – which Bening says is her favorite space on set – included linens found at ABC Carpet Home. “Her bed had to be luscious,” Musky says. “That’s where I spent a lot of money – on linens.”

Strong wall colors, like this blue in the dining room, were chosen by the production designer.

The dining room was painted a pale mint green. “That was a big choice of mine,” Musky recalls. “Michael was like, ‘What?!’”…But Russians would come to these places and they’d do blue, mint, peach or a pink. It was about fun and keeping it lively. The mint green worked well in contrast to the dark furniture.”

Musky’s risk-taking paid off, and not just for authenticity reasons. According to Bening, the results are “Gorgeous! Gorgeous those colors Jane chose. The living room is like a midnight blue. I was like, ‘Jane needs to come over and paint my apartment because she knows how to pick colors.’” 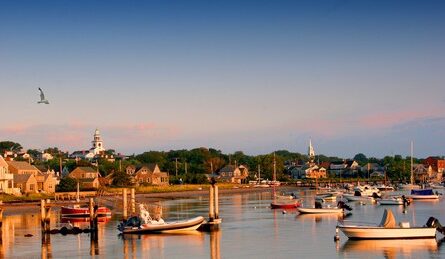 Bette Midler Tells AD About the Importance of Community Gardens