We’re just a week away from the release of the much-anticipated remake of Roald Dahl’s The Witches, and to keep us excited, the Grand High Witch – also known as Anne Hathaway – posted a behind-the-scenes photo of her character’s hair and makeup. 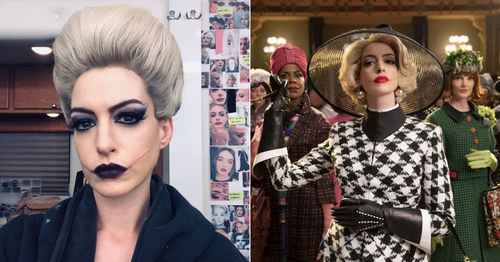 On Sunday, Hathaway posted a photo on Instagram from inside the makeup trailer on set of The Witches, with the caption, “Resting witch face. #TheWitchesMovie”, and we’ll give it to her: not only does she look terrifyingly wicked, but she also wins for having that genius caption. In the photo, the Grand High Witch wears a white-blonde wig with ashy roots, which is styled in a towering beehive. For the makeup, she wears a smoky, winged purple eyeshadow with dramatic false eyelashes with a deep, blackened plum lipstick to finish off the striking look.

According to IMDB, the beauty pro responsible for this wicked beauty look is a hair and makeup artist by the name of Paula Price, who has an impressive CV, including a Hollywood Makeup Artist and Hair Stylist Guild Awards nomination for her work on Mary Poppins Returns in 2019.

In the background of the photo, you can also see behind-the-scenes test shots and hair and makeup inspiration mood boards from the movie, which tells us one thing: we’re in for a treat (albeit a terrifying one) when it comes to the beauty looks in The Witches remake.

Lyndsey Scott is more than a triple threat. Yes, she’s a talented actress, activist, and model. She was the first African American to land an exclusive contract with Calvin Klein, has walked as a Victoria’s Secret Angel, and has graced the cover of Italian Vogue. But she’s also something you may not expect – a software engineer, coder, and app developer. 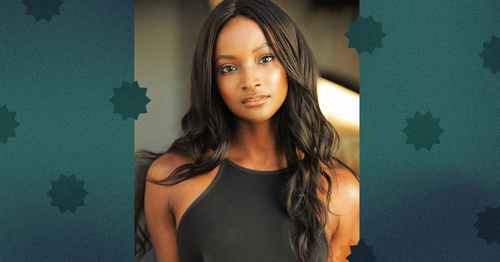 “I don’t have the typical Monday through Friday 9-to-5 schedule,” Lyndsey told us over email. “I often spend my Sundays programming, memorizing acting auditions, and spending quality time with my pets.” But while she’s confident on the catwalk and confident in CMS, she feels most empowered when standing up for friends and family.

“It’s inspiring when people step forward to help others even when they have nothing to gain,” Lyndsey said. “Often when we see something we think is wrong, it’s so much easier to stay silent, but when you take the risk to step forward, sometimes enough people will follow to make a difference.”

Self described as open-minded, determined, and “always working toward becoming the best version of myself,” Lyndsey is used to an on-the-go lifestyle, but has been a bit more stationary in recent months. But that doesn’t mean she still hasn’t been active! Ahead, find the essential products Lindsay relies on to help power her through her days one step at a time. And to hear more from Lyndsey, check out The Step, our podcast in partnership with SOREL. Lyndsey is featured on episode three of season two.

The UK TV and film industry has had a real problem with diversity but is that finally set to change?