After debuting on Season 7 of RuPaul’s Drag Race, Miss Fame quickly became a household name, with many firsts achieved in the years since.

As her makeup collection in collaboration with Sleek launches in the UK, GLAMOUR caught up with the fierce force of female embodiment to talk about what the term ‘drag queen’ means to her, how she went from TV to high fashion and the secrets to her gorgeous, glowing skin (of course). 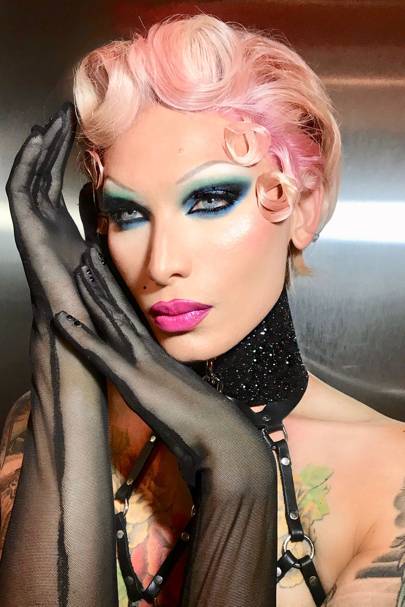 I prefer to say I’m a gender non-conforming artist

The word ‘drag queen’ has started to leave a bad taste in my mouth the past couple of years.

Although yes born male, and stripped of my clothing and embellishments of becoming ‘her’, I am male, there’s a part of my spirit and essence that I’ve always identified as a female energy, without having to call myself a transwoman. I do believe it’s ok for me to identify an aspect of my life as a female presence.

I was raised by powerful women. A lot of my aunts, grandmothers and sisters who raised me, taught me about being a woman and about the gentleness and the strength of being a woman, which is what I lean towards and what is more relating to my identity.

My success didn’t just happen because I was beautiful or did beautiful makeup. I had to fight for my space.

What I wish for the drag community now, is a sustainable success. Not just a flash in the pan for that season, or the ‘it’ girl of the moment.

I didn’t win my season. I haven’t been on TV in four years. But I still have a lot of interest within the fashion industry, because I fought for my space.

I had to fight to claim space within an industry that, even though they claim to be diverse, they’re really not. They’re comfortable with using the same girl over and over again, as long as there is a big name attached to it like a Kardashian, Jenner or Hadid.

I’m a beauty instrument within the fashion industry, but I had to claim my space by showing up repeatedly. 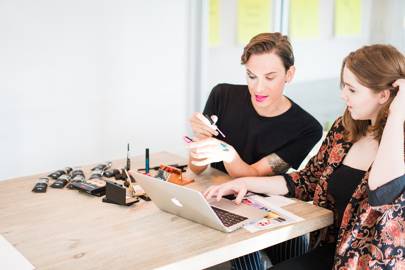 I was a man in makeup before it was a trend. Before Youtube even existed. I would walk down the street in a small town with a full face of makeup on. I was called a faggot and so many other awful names that I won’t repeat.

I don’t recommend engaging [with negative comments] because that’s exactly what they want. So don’t feed the fire. You can block and report abuse.

If it continues, you know, I’ve had moments where I have responded and I’ve said my part. Even though you really want to just say ‘f*ck you’ a lot of the times I just say ‘You are obviously wanting to be seen. I see you. I’m wishing you well, please get well soon’. It takes a lot to write the opposite of what you’re feeling.

Don’t feed negativity in life, at all. Because as soon as you give a speck of light to that person, even if you say the right thing, they’re just going to look at it as a cynic because they’re already hating on you. Let them poison their own existence. It sucks, but don’t get involved. 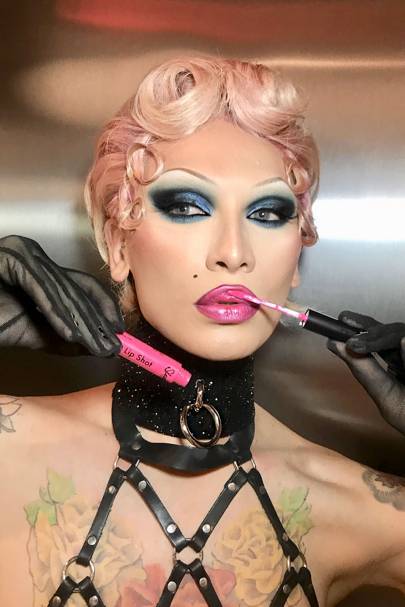 I’m obsessed with skincare. You have no idea, I do it all

I see Danuta from Rescue Spa in New York, an amazing aesthetician, once a month. She does a really elaborate facial; electrocuting my skin, hydrating my skin, exfoliating my skin. I’ve also done micro needling every other month or so, to keep my texture nice and smooth.

The products that I’m loving right now are from Dr Barbara Sturm. I use hyaluronic acid morning and night and it’s the best thing for my skin, it just drinks it right up. I also use her calming serum which is great for reducing inflammation and redness from travel.

Because I’m constantly removing makeup, I like to use Bioderma Micellar Water so that I don’t strip my skin of moisture, and then I’ll follow with a proper cleanse.

I use anti-pollution drops when I’m in cities to give my skin a nice barrier, eye cream morning and night, and retinol. Retinol! I’ve been adding that in the winter to keep my skin turning over and keep it exfoliating. I’ll also use hydrating sheet masks in the morning before a shoot and clay masks at night.

My Sleek collection embodies the queen aesthetic. It’s ‘attack with colour’ and a nice way to add some vibrancy.

One of the best parts is the price point (the entire collection can be purchased for £20). To be able to be linked with a brand that has affordable products where [fans] can create a look that’s inspired by a direction by Miss Fame, has really allowed me a nice way to kind of pay it forward.

A lot of the people who follow drag, are obsessed with the queens and obsessed with the show. So the fact they can go out and get a full collection of items that are going to give them a highlight, a lip and an eye, and a fully executed identity that’s very much me, is amazing. 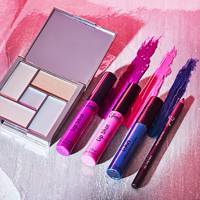 The Cycle of Our Hair…