Just the thought of needing a filling is enough to make some grown men quiver.

But a new scientific breakthrough could spell the end of ever needing to be treated with the dreaded drill again.

Researchers have created a natural product that has, in trials, been proven to both repair enamel and treat cavities.

Scientists at Washington University claim the compound could even be added to toothpastes and mouthwashes.

Dentists have today welcomed the new product as ‘promising’, as enamel is not meant to be able to regenerate. 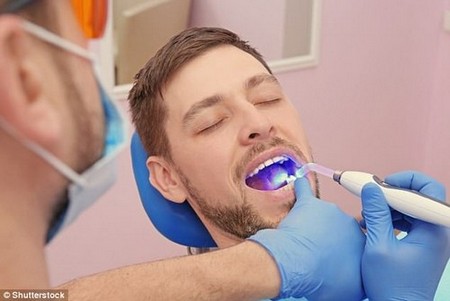 Just the thought of needing a filling is enough to make some grown men quiver. But a new breakthrough could spell the end of ever needing to be treated with the dreaded drill again

Professor Mehmet Sarikaya, lead author, said: ‘Peptide-enabled formulations will be simple and would be implemented in over-the-counter or clinical products.’

Erosion of enamel, which is the hardest tissue in the human body, can also lead to the yellowing of the teeth or sensitivity.

Cavities are caused by a build-up of plaque, a sticky substance made up of bacteria. Figures estimate four in five British adults have a filling.

Acids found in the plaque can remove minerals in the enamel and dentin – the layer before the pulp, which contains nerves.

Peptide-enabled formulations will be simple and would be implemented in over-the-counter or clinical products
Professor Mehmet Sarikaya, Washington University

NHS patients pay £59.10 for fillings, but cavities can be prevented by brushing teeth and cutting down on fizzy drinks and sugary treats.

The new peptide-based product, tested on damaged human enamel in the lab, offers hope of another way of preventing enamel loss and cavities.

Studies have shown the peptides can bind onto tooth surfaces and collect calcium and phosphate ions, needed to form tooth mineral.

They promote the formation of fluorapatite – a crystal that incorporates fluoride, which is added to toothpaste – in tooth enamel.

The peptide-based product allows the deposition of 10 to 50 micrometers of new enamel on the teeth after each use, tests found.

Researchers have yet to confirm the peptides are safe, but they expect no issues to occur. The study appears in the ACS’ journal Biomaterials Science and Engineering.

Dr Nigel Carter, chief executive of Oral Health Foundation, said: ‘This research is very interesting and the science behind it looks promising.

‘Any development which can help stop people suffering from poor oral health is very welcome.’

However, he added: ‘I feel it will be many years before this research has any day to day implications, it’s not the end of fillings quite yet.’

‘Many people have dental phobia so this could be a huge help for them and reduce visits to the dentist.

‘Also, prevention of cavities is always better than intervention and this new treatment has the potential to eliminate fillings altogether.

‘I think this is fantastic research although it still has a long way to go before being used in practice.’

The new technology eliminates the need to use amalgam – what is commonly used in fillings – by offering aesthetic white fillings which help heal the tooth.

Fillings made from amalgam – a mixture of metals, including mercury – are banned in some countries because of their toxicity.

Scientists are under huge pressure to remove mercury-based fillings by 2020 as part of international agreements. However, they remain cheaper to get.

ARE TRENDY WAYS OF CLEANING YOUR TEETH EFFECTIVE, OR DANGEROUS?

Despite the likes of Gisele Bündchen and the Hemsley sisters swearing by starting every morning with a refreshing glass of hot water and lemon, Dr Ben Atkins, a dentist based in Manchester and Trustee of the Oral Health Foundation, warns the drink effectively dissolves teeth and could even make them darker.

While critics link fluoride to everything from dementia to diabetes, experts argue numerous studies show the mineral does not harm people’s health, with free-from varieties missing out on ‘the main protective ingredient’.

Dr Atkins also describes the ancient Ayurvedic practice of oil pulling, which involves swishing coconut oil around the mouth, as a ‘waste of time’, with Dr Rhona Eskander, Best Young Dentist Winner 2016, adding it will not give you a Hollywood smile.

In terms of brushing your teeth with charcoal or apple cider vinegar, both Dr Atkins and Dr Eskander add the ‘natural remedies’ could do more harm than good as while their acidic, abrasive consistencies may remove surface stains, they could also permanently damage enamel.