Amy Schumer is known for having a slightly different approach to body confidence than many Hollywood stars. The newlywed isn’t thisbig, nor does she want to be. Instead, the star of the new (and controversial) movie I Feel Pretty embraces her curves and an attitude of enjoying food and exercise, rather than dieting or working out to extremes to lose weight. Read on to find out why Amy is the lifestyle coach you need in your life right now.

Her Attitude About Her Body Rocks

One of Amy’s recent Instagram posts pretty much sums up her feelings about body image, ones that she is trying to spread to women everywhere.

Rather than looking at your reflection and focusing on your “flaws,” the actress and comedian suggests this: “Just try loving yourself for 30 seconds today. Smiling at yourself in the mirror. Confidence is all mental and it’s time we were kind to ourselves. Just try it, if for no other reason than the other way isnt working.”

As she shows on her Instagram, the star isn’t afraid to order what she wants, like a sub sandwich if the occasion calls for one. In fact, Amy has confessed to really hating being hungry.

And in a recent interview with Australia’s Channel Ten, Amy said about her diet philosophy, “I exercise, I eat well, I just don’t starve myself.” 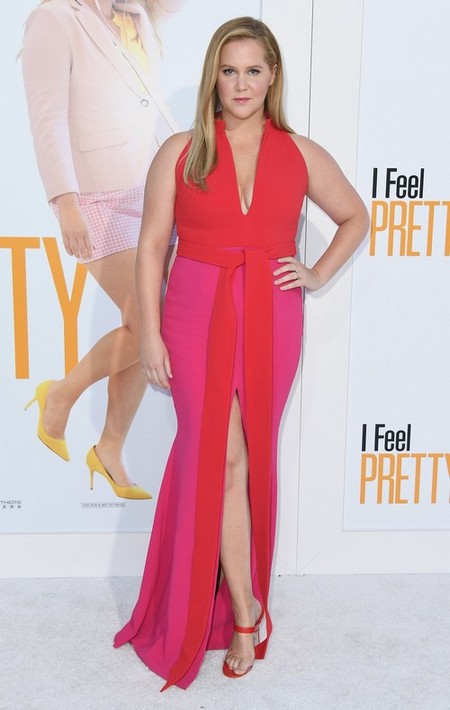 Amy also married a chef named Chris Fischer. So clearly she isn’t afraid to eat, a very refreshing attitude if you ask us! Even her critics can’t change her relationship with food. “I’ve been told I’m fat. I’m ugly. I’ve seen memes of me being the grossest woman in the world – me as Jabba the Hut,” she told The Los Angeles Times. But what others think of her body isn’t the driving force behind how Amy eats. As she explains, she still enjoys junk food sometimes but balances that out with foods that are good for her.

Amy has worked with trainer Harley Pasternak in the past. About his star client’s drive in the gym, Harley told Health, “First of all, Amy’s naturally an athlete. She played sports at a high-level through high school and college, and was an aerobics instructor. So she’s very coordinated, and easy to push in the gym.” He shared the funnywoman’s favorite strength-training moves: the skater lunge, dumbbell stiff-leg deadlift, dumbbell curl press, single-arm dumbbell row, lying dumbbell triceps extension with hip thrust, spider plank, and Superman. She then hits the Helix for cardio conditioning.

Harley also told POPSUGAR previously about his star client’s approach to exercise, “Amy lives by the idea ‘strong in the gym, lean in life.’ She keeps her workout with us super brief and stays active through the rest of the day.” For example, Amy tries to walk everywhere, like from the studio to her hotel. She’ll even multitask during these workouts, returning calls. Sounds like an exercise plan anyone can stick to!