As this year’s theme asked attendees to embrace all things ‘Camp’, we saw an array of sequin-clad celebrities raise the mani stakes tenfold.

While it’s easy to get lost in a whirlwind of sequin gowns, feathered lashes and glittered locks, when it comes to the Met Gala, no beauty stone gets left unturned. From quirky shapes to avant garde nail art, this year brought some serious nail game.

We’ve caught up with Naomi Yasuda (@naominailsnyc), the woman behind some of the pink carpet’s most lust-worthy nail looks, to round-up the biggest nail trends of the night…

While she stole the show with four different outfits, you’d be forgiven for missing the masterpiece that was Lady Gaga’s manicure.

Opting for a classic red almond-shaped nail, Gaga kept things classic to ensure her nails complemented all four of her outfits.

But this isn’t just your standard red mani, this is a Gaga-approved red mani.

“Lady Gaga’s nails were long, so her nails were painted both on top and underneath. She’s always using her hands and therefore needed every angle polished,” reveals Naomi.

“Using OPI Nail Lacquer in Big Apple Red, I started by painting two coats underneath her nails. Then [on the top], I applied OPI base coat and two coats of Big Apple Red Gel Color, and finished off with OPI Gel Top Coat.”

Never one to blend in with the crowd, Ezra Miller’s illusionist makeup look might have had you in awe, but frankly it’s his nails that stole the show.

While most of us have spent our lives filing away to create a perfectly-rounded shape, Ezra’s look totally rewrote the rules.

Proving that splayed ‘duck’ nails absolutely can (and definitely should) be a thing, the actor’s white mani extended out from the nail bed in every direction and was finished off with a sharp square edge.

While the general rule for the Met Gala is ‘more is more’, Celine Dion decided to go for an on-trend minimal approach with her nails to counteract her elaborate gown.

Naomi says: “[Celine] told me she was going to wear a lot of gold, and we wanted to do something neutral that still matched her outfit.”

Opting for understated rounded edges, Naomi painted Celine’s nails with OPI base coat and then layered three coats of OPI Gel Color in Samon Sand over the top, before finishing off with OPI Gel Top Coat.

Could this become a go-to nude?

While fashion model Paloma Elsesser opted for a raw-edge all-denim look, it only makes sense for her nails to match too.

Get ready to add this denim stiletto manicure to every nail inspo board you have.

Proving that a manicure can be just as extra as her Marc Jacobs gown, Rita Ora went for a crystal-encrusted gold look on her nails.

Draped in a head-to-toe gold gown, her bejewelled nails blended seamlessly with her gold sequined dress, and we are living for it.

“I wanted her nails to look like an extension of her dress,” says Naomi. “First I applied two coats of OPI ‘Comet Closer’ and let that dry. Then I mixed OPI ‘Dreams on a Silver Platter’ and OPI ‘Gold Key to the Kingdom’ together before applying two coats followed by the stone applications. I finished with OPI Top Coat.”

Good news – grown-up glitter is alive and kicking thanks to this manicure showcased by Alexa Chung.

No one does chic quite like Alexa, and this nail choice proves to be no exception.

This green glitter half-moon look is provides all of the negative space inspiration needed for seasons to come. 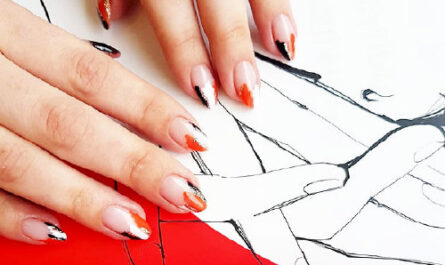 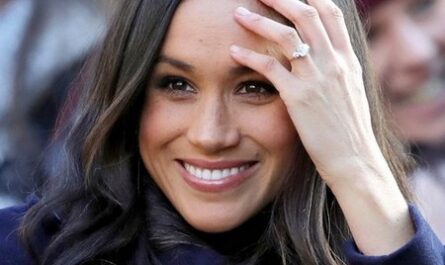 These are the trending autumn nail colours to know, according to top manicurists