Set in the mysterious lands of Mapu, high up in the Himalayas, Black Narcissus follows a sisterhood of nuns who attempt to establish a new mission in a clifftop palace once known as the ‘House of Women.’

However, their piety, sisterhood and mental health is challenged when they unlock haunting mysteries and discover their own forbidden desires. It certainly will have many getting a little hot under the collar when the three-part series drops on Boxing day with Gemma Arterton co-starring and Dame Diana Rigg appearing in the last role before her death.
Aisling Franciosi knows a thing or two about playing a troubled character. The Irish actress, who first rose to fame on the BBC drama The Fall playing the schoolgirl temptress, Katie Benedetto to Jamie Dornan’s serial killer, is dealing with character trauma all over again by taking on the role of Sister Ruth, a nun battling her mental ill health and internal desires in the BBC retelling of the infamous cult movie, Black Narcissus.

The 27-year-old’s ability to take you to the darkest parts of our existence is down a level of talent which saw rave reviews at the Venice Film Festival and international awards for her role in the movie, The Nightingale. In the movie, Aisling played Clare, young Irish convict who chases a British officer through the rugged Tasmanian wilderness to avenge a terrible act of violence he committed against her family. The results are chilling and heartbreaking in equal measure.

As I speak to her from her New York apartment, via the power of Zoom, we ponder her typecasting for playing troubled individuals. “I actually started to wonder, ‘what vibe am I sending out for me to keep getting offered damaged, dark or traumatized characters?’ I would like to do a comedy at some point because I really feel like I’m not really that person,” she laughs flashing a personality that is far removed from the troubles of her characters on screen.

Here, Aisling opens up about the impact her roles have had on her personal mental health, managing her ‘unhealthy perfectionism,’ and how playing Sister Ruth showed Aisling she could never be a nun… 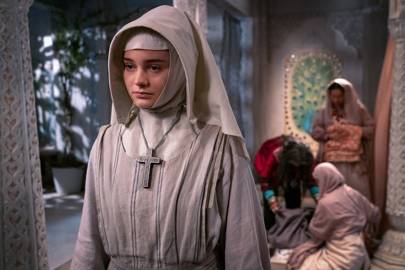 You are back on the BBC babes with the dramatic retelling of Black Narcissus where we have nuns, piety and it all gets a little racy, too. What attracted you to the character and what did you learn from playing her?

The thing I learned is I could never be a nun. I just would not be able to handle the devotion. I really admire what they can do especially in terms of setting up schools and charity work, but it really takes a certain kind of person to just devote yourself entirely to a cause that you can’t see. The prayer is all day, every day and you strip away your identity and you strip your need for any external validation. It’s just all about serving God all the time. That made me feel a bit panicky, just because of the sense of isolation that you would get.

Ruth is irritating at the start. I’ve played a few irritating characters and I think the fun of playing them is trying to understand what’s going on underneath for them. She is a character who is very clearly unwell, really vulnerable, very fragile, is isolated and just craves Sister Clodagh’s approval, wants to feel validated by her and wants to feel that she’s worth something.

Because of the way that the Order works and everything she is confined to just being a vessel for prayer in her eyes. She feels stripped of her identity, a bit worthless, and isolated not just physically in this amazing location in Nepal, but from the rest of the group as well.

What kind of prep did you do to play a nun?

We spoke to a d a great minister – he was so lovely – who answered any of our questions that we had about the daily routine and how they live. We went to visit a convent as well and they were so lovely. But what helped me most in terms of prep was the costume. It is designed to keep you as inward as possible, with the wimple and the veil that sticks out far so you can’t see anyone. We were all swiveling around 90 degrees whenever you want to talk to someone, and you really can’t hear very well.

It’s all designed to maintain the custody of the eyes – it’s called – so unless you absolutely have to, you shouldn’t need to be looking outside of yourself or focusing your attention anywhere other than to your job to serve God. All my senses were a bit muffled. Then for the mental health aspect, I already did a lot of research for a previous role, so I tried to apply that to this. 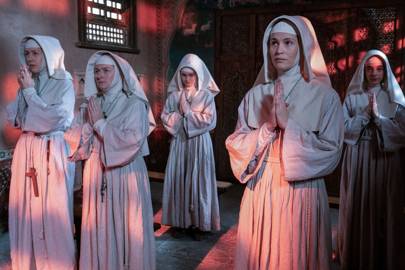 What has delving into this level of mental ill health taught you about your relationship with your own mental health?

It was a real eye-opener on one project in particular, The Nightingale. It was a brutal and heavy-going job. I thought before that – which was stupid of me – that I had ownership and control over my own emotions and mental health to a certain extent, which was just a very ignorant view. I had to put myself in a very negative space every single day for months on end and I found it very difficult to actually bring myself out of it, which is the first time that had ever happened. What was required of me for that role was way above anything else that I had done before. I was really surprised when I realized I am not immune to mental ill health and no one is.

Before that I never understood how mental health can affect your physical health. The way that you move, the way that you breathe for instance has an effect on how tense you are. I had always been very into fitness and taking care of my body, but because of pure luck, I hadn’t really needed to take care of my mental health but it took me a while to kind of get back to neutral after filming that.

I find it really fascinating the way that our brains react to trauma, our surroundings and stress for self-preservation. It can be devastating. I’m glad that there have, in recent years, been great strides in how much we talk about it because there really was such a stigma around it for such a long time. I’ve definitely become far more attuned to what affects me negatively or positively.

Black Narcissus draws attention to the way we label women as ‘good’ or as ‘bad.’ What kind of labeling in your own life do you ever feel restricted by?

Oh, wow, that’s really interesting. One label that is dangerous to put on someone else – and I really took it on myself when I was younger – was being ‘a goody-two-shoes.’ I really never put a toe out of line. I never did the teenager rebellion. I really developed an unhealthy perfectionism which as soon as you go into your adult years causes issues, because then it’s impossible to be a perfect adult. It’s impossible to be a perfect anyone, but when your job is just to be a good student or maybe a good daughter it becomes harder as an adult.

I had to get rid of that as the more you live up to it, the more people will reflect that back to you and you think, ‘Oh, well this is my identity now. I have to really live up to this.’

When you can’t live up to it, it can feel scary, like you’re failing in a huge way and that you don’t know what your identity is. Some labels are negative and damaging and some labels we put on ourselves to give us comfort or a sense of knowing who we are like little markers of where we are in our lives. I struggled, whenever I failed at stuff, a lot. I’ve never been perfect but now I am going to embrace the label of totally imperfect. 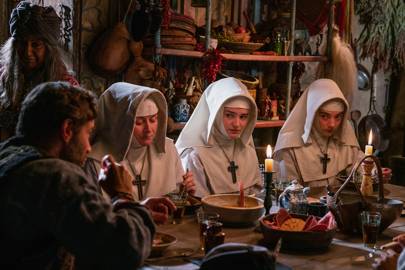 This year has really shown if we are not working how we perceive our identity away from our jobs and how we can’t use them to validate us. How has that affected you and where you get your validation from?

I’ve definitely gone through that because with acting I haven’t worked the whole time in my career. There’ve been really long stretches where I haven’t worked, and ‘those thoughts,’ definitely do come into your head. I’m trying to change my phrasing on it as I move forward, but I would have always said, ‘I am an actor,’ as I can’t separate it from who I am.

Having been through big spells where I don’t work, I don’t know if that’s a very helpful way to talk about myself because when you’re not doing the thing that you kind of define yourself by it can be really challenging.

I remember when I wasn’t working for a year and a half – so longer than COVID right now. I found I was going to festivals and stuff and posting it on social media. I had a few people say to me, ‘Oh my God, you’re so busy. You’re doing so well.’ Meanwhile I was having a crippling self-doubt because I hadn’t worked in a year-and-a-half, but on Instagram it didn’t look that way. But COVID has been an emotional roller coaster. I have never been a very teary person and now I find that I’ll watch a really cute video and suddenly I’m getting teary-eyed and that is not me at all, really. I don’t know what COVID is doing to me.

Black Narcissus is about institutionalized sisterhoodbut how has sisterhood helped you at different times in your life?

Off-camera we had an amazing time and we really bonded. When we were filming in Nepal we were really isolated with no internet, no phone service except when we went down to another village, which was like another hour away. It really meant that we all just sat around a fire in the evenings having a couple of drinks and when you’re that far away from home in a very remote area with no internet, it leads to very quick bonding.

I’m really into this idea of creating your little communities because not one person can do everything and it’s really unfair to expect that of someone as well. I’ve been very lucky to have some very close girlfriends who know me inside-and-out, know all of the ugly parts and who can hear from my voice in two seconds if there’s something wrong.

That is a huge support. Sisterhood is really important to me and with the recent movements pushing for women’s equality and the pay disparity, show that woman can come together for a cause. Sisterhood can be great on a huge scale for causes and also on a smaller scale for just your own personal day-to-day survival.