Listen, if you’re a professional woman living in a major city, spending a hefty percentage of your salary on designer clothes, and shamelessly obsessing about your career (and/or revolving door of hot boyfriends), then you can’t deny that the Sex and the City franchise probably had a profound effect on your adult life.

I mean, I’m a fashion-obsessed writer who lives in New York. I should know. But just in case you still have some unfulfilled Cosmo-fueled fantasies, look no further than Airbnb’s exclusive tour of NYC with Sarah Jessica Parker, an experience that four lucky people willing to throw down $400 will get to enjoy.

The tour, which is part of Airbnb’s foray into hawking “experiences” in addition to short-term housing, includes an afternoon of shoe shopping at Bloomingdale’s on 59th Street (where participants will take home a free pair of shoes from Parker’s line, SJP by Sarah Jessica Parker), frozen yogurt with the star at Forty Carrots, and an evening at the ballet.

All proceeds will be donated to the New York City Ballet, a favorite cause of Parker’s. And given that a pair of SJP heels sans the experience of meeting the star will set you back anywhere from $365 to $500, the whole thing is kind of a steal, except for the fact that the tickets, which were supposed to be released the morning of September 26, are somehow already sold out.

Looks like the rest of us will have to stick to SATC reruns and buying her overpriced shoes if we want to get our fix. I mean, I guess you could also lurk outside of Bloomie’s on October 6, when this whole thing is supposed to go down, but one imagines she’ll have some kind of bodyguard present to ward off the Carrie Bradshaw-obsessed randos.

According to the Associated Press, Parker was keen to make sure her tour “speaks to the very colorful identity that is New York. We could have gone to MOMA or the Whitney or walked through Chinatown or certainly had a nice walk on the High Line or just strolled the streets of the East Village or Midtown East.” However, she decided on Bloomingdales because it’s an “iconic destination.” Oh, and also presumably because they sell her shoes there. As for why the tour doesn’t take participants to Magnolia Bakery, the restaurant that arguably benefitted the most from being featured on the show, Parker claims it “didn’t even occur to her.” Ouch. Froyo: 1. Cupcakes: 0. 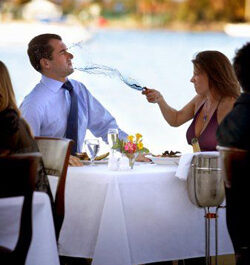 How to part with a man, so as not to torture him and not suffer himself