In 2016, I made the hardest decision I’ve ever had to make in my life: I left my abusive partner, and the father of my very little baby girl.
This week, social enterprise Beam – who help homeless people get into work – has launched their ‘Donate Your Christmas Party’ campaign, to encourage companies to support homeless people this Christmas by donating unused Christmas party budgets. They’re hoping to raise £10,000 to re-train homeless people into full time work.

He had been incredibly emotionally abusive for some time but, slowly, it had become far worse. It started with him vetting everyone in my life, and eventually ended up at the point where I wasn’t allowed to have any friends.

Even when I was at work, he had to know what I was doing all the time, ringing me constantly and even turning up at my workplace. I was under constant surveillance. I was never allowed to be me. 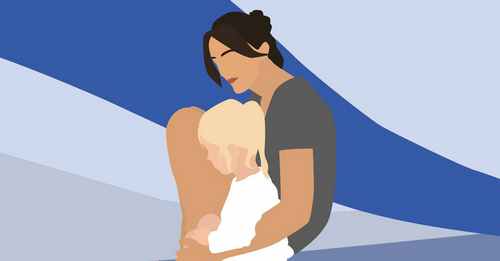 I’d thought about leaving many times, but it wasn’t until I had my daughter that I finally said: ‘enough’. I’d grown up in an abusive household – my mum and dad would physically fight and I used to run away from home all the time – and I knew I couldn’t put my baby through that. I didn’t want to give her a life she wanted to run away from. I needed to focus on her; I needed to give her a good life.

But it was only once I’d left that I realised we had nowhere to go. Because of him and how hard he’d worked to keep everyone away from me, I’d become so isolated from everyone in my life.

I couldn’t go to my mum; I had barely any friends I could turn to. And above all, I felt ashamed. Imagine going from living in a nice flat – I could see the London Eye from my window – to having nowhere to go and needing a sofa to sleep on? I can’t put the shame and embarrassment into words, particularly with a baby.

So, I went to the council and my daughter and I were placed in a temporary accommodation hostel. I think that was the worst time of my life, I’ve never felt that kind of depression before. It was all-consuming. I had to leave my job – which was only part-time and wouldn’t have been nearly enough to sustain us anyway, particularly with the childcare costs I’d now need to pay for – and be on income support in order to secure our place at the hostel. It’s different now thanks to the introduction of Universal Credit, but back then, that’s what I needed to do to make sure my daughter and I had a roof over our heads at the very least.

That’s when I was introduced to St Mungo’s. I met with them, told them my story, and they were able to place me in private rented accommodation, while also introducing me to Beam.

“For the first time, I didn’t feel like a terrible mum for not having the expensive stroller and the big house. I was just a mum who needed help.

Beam sat down with me and we talked for what felt like hours. They made me feel valid, believed. For the first time, I wasn’t made to feel like just a silly girl who had made bad decisions and brought homelessness on herself. I didn’t feel like a terrible mum for not having the expensive Bugaboo stroller and the big, flashy house. I felt like a normal human being. Like a good mum. I was just a mum who needed help.

They said, ‘Right, let’s get you back into work’. They were able to fund my baby’s nursery costs, her lunch costs – I often had to go hungry just to make sure my baby had something to eat – and secured funds for me to start training at a high-end dental practice in London. My life changed beyond words that day. Finally, my baby girl and I had something to look forward to. We had a future.

Now, I’ve worked my way up to senior administration level as an executive PA, and my next goal is to train to become a dental nurse. And I’ve even recorded a TED Talk about my story which is due to go live later this year. I always used to watch all the inspiring women give TED Talks, so I couldn’t believe it when they asked me to share my journey.

So I asked myself, ‘What should my message be? What do I want to share with other people?’ And the answer is that homelessness can happen to anybody. I want other women to know that this could happen to you – you could be left with nothing – and the steps to take to make sure it doesn’t. But ultimately, I want to make sure no one ever has to feel as alone as I did, because homelessness is the most lonely thing in the whole world. But there is help available. Without it, I don’t know what would have happened to me and my baby girl.