She was named Model of the Year in 2017 by the British Fashion Council, but since then Adwoa Aboah has proven that she is so much more than just a (very!) pretty face.

Founding hugely popular and widely appreciated online platform Gurls Talk, she encourages women to openly talk about mental health, diversity and addiction amongst other things, in order to redresses fears and worries that they’re alone.

But unlike many models who shift their focus onto thoughtful projects and in turn step away from the runway, Adwoa has managed to not only keep her fashion career but to continue to excel at it.

We caught up with the model – one of the industry’s most popular right now – on the morning of London Fashion Week to find out more about her take on the showcase. 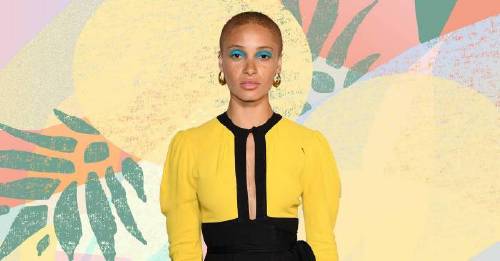 A It’s not a full ‘fashion week’ memory because I wasn’t doing the full system then, but the first show I ever walked was for Giles Deacon, and that forever will stand as a big moment. As was the Queen sitting front row.

Q You were a huge part of Richard Quinn’s iconic show watched on by the Queen, but who do you think it would take to grace the front row to top that moment?

A That was mad. That was a moment. I hear Meghan’s coming this season?! I don’t know if that’s true. I hope she is, that would be cool. I don’t think it would beat the Queen though, you can’t get higher than the Queen. Maybe Beyonce?

Q What are your thoughts on Front Row fashion – is it supportive or a bit lame to wear the designer who’s showing?

A I think it’s supportive, but it’s really important to add your own style to it. I don’t want to be head-to-toe, I’m not into that. But that’s just because quite like putting my own style into it. I do definitely think it’s supportive, but what I like to do is just make sure you wear it, it doesn’t necessarily have to be at that specific show, because everyone else is wearing it at the show anyway.

Q When you’re walking a show yourself, what’s your signature look backstage during makeup?

A It depends, but I do like to be comfy. Tracksuit, trainers… I’m about to wear heels on the runway so it’s important to be comfy beforehand.

Q What would you say is the key point-of-difference between London Fashion Week and the three other cities?

A I think here we give platforms for new talent to just rule the game.

Q Who’s your one-to-watch this season?

A Richard Quinn. He’s going to knock it out of the park. Richard, for me, he just ups his game every single season.

Q Which women are changing the game in fashion right now?

A I definitely support a lot of those designers here in London. Obviously there’s Ashley (Williams), Molly (Goddard), Simone (Rocha)… It’s more that when I talk about them ‘changing the game’, they just do them. They don’t necessarily try and fit into certain moulds that I think have been set out in fashion. They really do their own thing, and that’s something that I definitely want to be involved in. I’m walking Bethany Williams this season, so I’m really excited about that and all the work she’s doing in terms of sustainable fashion.

The 10 things we’ll *all* be wearing next season

Adwoa is a big advocate for sustainability, and is working with Land Rover on the Evoque Live for the City campaign. At the event’s launch, the model wore a specially commissioned dress designed by Ashley Williams, crafted from suedecloth textile – one of the vehicle’s sustainable interior options.

Here’s everyone who won, at the Grammys