A little over a year ago, I’d turned myself into a ‘clean eating’ expert – and I had the body to prove it. With taut abs, toned arms and glowing skin, I was happy, healthy and positive.

Kombucha or sauerkraut? Lemon or lime in my hot water? Almond or coconut milk? Make. Me. Well.

That is, until you looked beyond the flattering photos I’d post on social media. I was 25 and hadn’t had a period in more than two years, I had osteopenia (thin bones), the sex life of a plant, my hair was falling out and I was riddled with intrusive and compulsive thoughts about what might happen if I broke my ‘wellness’ commandments.

Clean eating starts with the idea that we should all eat more whole, unprocessed foods – more vegetables, less junk food – which sounds sensible enough. However, scratch the surface and this is a world where bread and pasta are poison and dairy is toxic. 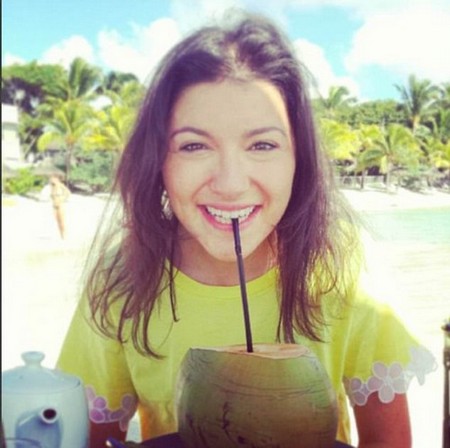 While sales of clean-eating cookbooks soar, dietitians and psychiatrists warn that this lifestyle can quickly tip into an all-consuming eating disorder. This is what happened to me.

I can trace its beginnings to my older sister’s hen do, surrounded by her beautiful friends. They all had perfect jobs, perfect skin, perfect bodies. I’d just finished drama school, was in debt and living with my parents, and had no plan.

Later, chatting to a friend, I said I wasn’t feeling good: bloated, foggy brain, generally ‘bleugh’. She recommended a ‘clean living’ book. ‘It will change your life,’ she said. ‘It teaches you how to be kind to your body, your skin, your weight, your mind, your energy levels, everything.’ An easy sell.

Daniella posted flattering photos on social media, despite suffering from an eating disorder

I’d been diagnosed with coeliac disease (an auto-immune condition where the body reacts to gluten) a few years earlier, so I had already cut gluten out of my diet, but otherwise I enjoyed food and ate a varied diet.

But the book insisted I cut out dairy, then sugar and then meat and grains.

Then, it promised, I would be clean. I would feel better.

I joined my local gym, too – and along with my new diet, it gave me a much sought-after routine. It was around this time I downloaded the social media app Instagram. I started posting about my progress online and got endless compliments. I finally felt I was in control.

And I was supported by a whole community. Bloggers such as Deliciously Ella, Honestly Healthy, Clean Eating Alice – they were all there to inspire me. The weight dropped off. It became my religion.

Then, a theatre show I’d created and acted in transferred to Australia. This is where my ‘clean’ lifestyle went up a gear. My days consisted of exercise first thing, brunch (so I didn’t have to eat breakfast and lunch) of avocado and eggs, and later a vegetable-filled dinner.

When I came back to London, I couldn’t get off the wellness treadmill. I started ghost-writing for ‘clean living’ brands, developing recipes. I even launched a brand of granola.

The job was the perfect way to retain total control: alcohol was banned from events, every menu was free from sugar and gluten, and detailed descriptions of exercise routines were accepted as dinner party conversation.

After about six months of eating clean, my sister and mum voiced their concerns to me, but I ignored them.

Even when a wellness expert I was writing for took me to one side and said my lifestyle was getting ‘excessive’. .. I didn’t listen.

It was only in November 2016 that I began to reassess. My sister announced she was pregnant – it was a sharp wake-up call reminding me that I hadn’t had a period in over two years.

Daniella moved to Australia where her eating disorder worsened

I went to the gynaecologist who said that although my weight was within the ‘normal’ range, my oestrogen level was non-existent. He explained that to conserve energy, my body had stopped releasing the hormone.

I now know that I was in the grip of orthorexia; an eating disorder characterised as an unhealthy obsession with healthy living. The doctor didn’t diagnose this specifically, because it is not yet officially recognised by medical bodies.

But once I had explained my lifestyle to him, it was clear my disorder was far from rare. ‘If you were a plant,’ he said, ‘you’d be withered and on your way out. Your body hasn’t been nourished in a long time. You need to learn to love yourself again. What are you scared of?’

I hated the question. I was scared of the thoughts in my head, scared of being a failure.

I knew I had to change if I wanted to bring my periods back. I felt angry at the wellness world. I’d spent so much time, money and headspace obsessively following the rules, only for them to make me sick.

The gynaecologist suggested therapy, but I wasn’t ready for deep reflection (and the NHS waiting list was long), so I turned to a group I found on Facebook called ‘No period, now what?’ Here, I found hundreds of women like me. Many had fallen into orthorexic habits.

Their advice was simple: ‘Let go’. No rules, no recipes, no detoxes, no cleanses, no selfies.

I started with small, incremental steps. I’d miss one day of exercise, I’d have porridge for breakfast instead of a smoothie. Then, I’d let friends choose where we went for dinner. I ate carbs, real carbs.

I hated seeing my body change. My hard-earned abs turned to soft rolls. I had bursts of rage and deep sadness. I felt like a failure, mentally and physically.

Each month I went back to the fertility clinic for blood tests. I’d be surrounded by women who were hoping to get pregnant; I was just hoping to feel like a woman again.

It took six weeks before my oestrogen level rose. After four months my period came back, just in time for opening night of my new show, Hear Me Raw.

I wanted the production to reveal the dirty truth behind the clean living movement.

Because despite how it might have looked on Instagram, I had never felt less well. The so-called wellness industry isn’t really selling wellness, is it? It’s the diet industry dressed up in candy-coloured phrases of empowerment. And it’s making us sick.

One dead, two hospitalized by Legionnaire’s cluster in the Bronx

Vitamin B6 supplements may help people recall their dreams