If you’ve ever calculated the calories you burn in your workouts and wondered why they don’t add up to more pounds dropped, well, turns out there’s a scientific reason for that – and no, it’s not just that you might eat a little more after a tough workout.

According to a new study in Current Biology, our bodies “compensate” for the calories we burn during workouts by expending fewer calories throughout the rest of the day. That adds up to a lower net calorie burn than you think you’re getting – by a surprisingly significant amount.

The study analyzed data from 1,754 adults that told them two key measurements: how many calories each person burned simply by being alive (their “basal” expenditure, also known as your basal metabolic rate); and how many overall calories they burned during a day, which would include any exercise or activity they’d done. Subtracting the basal expenditure from the overall expenditure told the scientists how many calories the person burned from exercise and any other kind of movement (standing, walking, moving around) in a day.

They then compared that number to the amount of calories that person would be expected to burn, derived from statistical models. (The study only focused on calorie burn, not how many calories the participants consumed with food.) 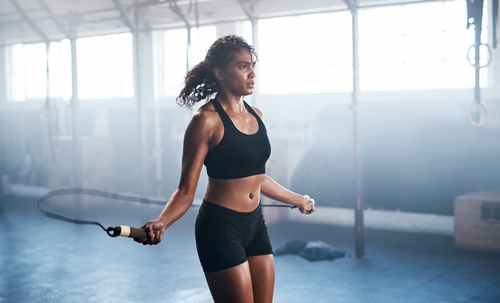 The results showed that, on average, only 72 percent of the calories we burn from exercise actually translate into additional calories burned that day. That means that your body “compensates” for about 28 percent of the calories you burn during a workout by burning fewer calories during the rest of the day, when you’re at rest. (The researchers didn’t know exactly what your body does to “save” those calories, but speculated it might dial down other calorie-burning processes like your immune system.)

So, let’s say you burn 100 calories in a workout. You can’t just say you’ve now burned 100 more calories on the day, because your body will now burn fewer calories elsewhere. Instead, the average person will burn closer to 72 extra calories – still an additional expenditure, but less than expected. And while previous research had found that exercise was translating into less calorie expenditure than predicted, this study is the first to quantify it so precisely.

One last bit of frustrating news came from the study. It turns out that this calorie compensation effect is even stronger in people who have relatively high levels of body fat. The study found that their bodies compensated for 50 percent or more of the calories they burned during exercise and activity.

If you’re trying to lose weight, all of this might feel a bit discouraging to hear, but it’s important to remember that the study was focusing on extra calories burned. When your body is active, you still burn more calories than you do when completely at rest, even if it’s somewhat less than expected. It underscores the importance of sticking to your workout routine while being mindful of what you eat to ensure that your weight loss strategies are staying as efficient – and effective – as possible.