While we don’t yet know what the situation will be looking like come December, Boris Johnson has made it clear that we should plan for the worst, telling us, “Unless we palpably make progress, we should assume that the restrictions I have announced will stay in place for six months.”

If the guidance stays as is for that period, we can expect that the ‘rule of six’ will continue until April 2021 meaning any plans for a big festive knees-up will need re-thinking. And the same applies to your Christmas day lunch and everything in between.

The rules apply across England, and means that no more than six of you can sit around a table, eat out together at a restaurant, go for a walk etc etc. There are exceptions to the ‘rule of six’ too if you’re already in a household or support bubble made up of more than six people.

We’re now just three months away from Christmas and yet life as we once knew it has taken a dramatic turn. It’s safe to assume Christmas 2020 is going to be unlike one we’ve experienced before. 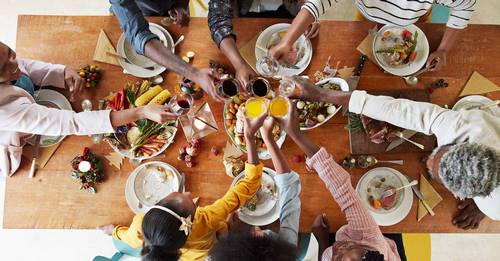 The PM recently announced new lockdown rules following an increase of Covid-19 cases across the country. In addition to the ‘rule of six’, which bans you socialising in groups of more than six people, there’s curfews on restaurants, pubs and bars to close at 10pm and stricter face mask requirements. We’re now being asked to work from home again as much as possible.

While big gatherings might be out, we’ve rounded up some fun ways to have a ‘rule of six Christmas – just be sure to leave Santa some hand sanitiser beside the mince pie…

DIY game of Guess Who

It wouldn’t be Christmas without games. If you’re finding yourself having to pick between family members, why not combine the two and create a DIY Guess Who featuring all the missing aunts, uncles, cousins and more? Print photos of each member, cut them out, stick them in the game where the face cards usually go and Bob’s your uncle.

If the festive season usually means hobbling around on skates (or twirling, depending on your abilities) the good news is, some ice rinks across the country have already confirmed they’re returning. In London, ice skating at the Tower of London and Hampton Court Palace have both been confirmed, with ice rinks also returning in Edinburgh, Cambridge, Tunbridge Wells and Liverpool.

You can go with up to five friends but expect extra Covid-safe measure including limited slots to maintain social distancing and to wear a face mask (even if you’re outdoors).

Many of our favourite winter pop-ups are back for 2020 – with extra precautions in place to stick to the government guidelines. The gang at Backyard Cinema are bringing back The Night Winter Garden, with reduced capacity, one-way systems, temperature checks and more that you’ll be able to attend with a group no bigger than six.

Some of the summer’s popular drive-thru cinemas that set up camp across the UK are expected to return for December too – meaning if you stayed in your own cars, you could technically go along with more than six friends – just keep your distance.

Bake Off is back on our screens and Christmas often gives us that cute baking feeling so why not grab five friends (no law-breaking here, guys) and have a gingerbread house-making competition? It would probably work best if every team pre-bakes their gingerbread ‘parts’ and brings it along with them where teams will have to create a show-stopper in a few hours. Upload your creations to Instagram and have a poll to crown the winning house.

It’s become an annual charity must-do, donning your most outrageous festive knitwear for Save The Children’s annual Christmas Jumper Day which this year falls on Friday 11 December. It’s likely you won’t be in the office to show off yours so we suggest the morning Zoom meeting becomes ridden with such beauties. Oh, and the best jumper wearer definitely wins a chance to slack off work at lunch.

You know all those Instragammers and their door-perfect Christmas wreaths? Well, making your own one isn’t actually that hard. Team up with a pal or two and spend a day foraging for greenery in your local park – even better, your garden might have some holly and pine cones. You can grab the kit (a reusable metal ring base, green florist wire, ribbon and extra accessories) online at Hobbycraft or from your local florist.

If you’re used to doing a big Secret Santa with your friends or work colleagues but wondering how you’re going to make it work with the ‘Rule of Six’ in place? Fear not, there’s a way. Everyone passes on their addresses pre-draw and then the organiser uses an online secret santa generator to match everyone up with someone. You then send their Christmas gift directly and anonymously to them and everyone opens together on Zoom. Easy.

The gross thing you need to stop doing in the bathroom