The young architect Sam Chermayeff was holding court in the dappled sunlight outside Manhattan’s Storefront for Art and Architecture the other day. Twenty feet away his latest masterpiece sat in the middle of the sidewalk.

He had earlier visited a restaurant supplier to buy a low white oven on wheels that “cooks like lightning,” he said. The oven got topped with an orange toss pillow he brought from home and a tall flagpole, or perhaps it was a mast, which soared above, holding aloft a lopsided bouquet of wine goblets, also from home.

Although it was a summery afternoon and the SoHo streets were teeming with people, none of this was attracting much attention. At 10PM, however, he planned to plug into an electrical outlet, using a snaking extension cord, and start warming Clams Casino, a delicacy he described as dating to “a time when it was cool to be drunk.” The plan was to give away a hundred bivalves garnished with peppers, bacon, butter, and pulverized Ritz crackers. “I try to make things that are festive and bring people together,” he explained.

Chermayeff spent five years working in Tokyo for Sanaa, the cult contemporary architecture firm responsible, perhaps most famously in New York, for the New Museum of Contemporary Art. He, along with his business partner and fellow Sanaa alum Johanna Meyer-Grohbrugge, were invited to be among two dozen adventurous young firms like Buro Koray Duman, T+E+A+M, and TheLab-lab. Each built a unique stool and organized a 60-minute performance for the recent all-day-and-all-night festival known as Solstice: 24x24x24, which brought together 24 designers to each create a seat for a collective gathering during the summer solstice during a 24-hour-period running from 7 PM on June 20 to 7 PM on June 21. 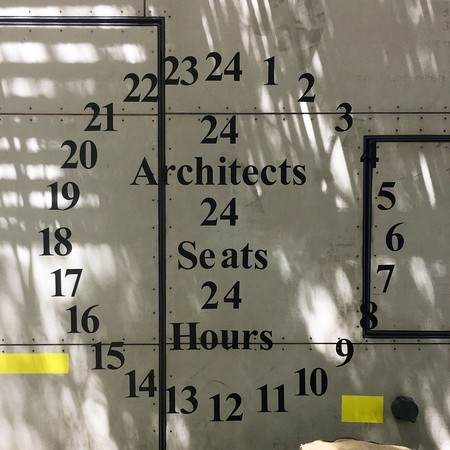 For decades now, the rap on young architects has been that they no longer believe form follows function. Here, function followed fun. Had things gone flawlessly according to plan, the festival might have been a little less spirited. Originally, five firms were going to furnish stools for a communal table in a booth at a furniture fair. Then the location changed to a vacant lot on Manhattan’s Lower East Side, before moving, finally, to coincide with Storefront’s Architecture Book Fair, which had opened there earlier in the week.

Koray Duman’s stool featured glow sticks that were put to use during a silent disco at midnight.

“We’ve made a bunch of library stools,” explained Koray Duman, an organizer. Among the ground rules for participants: each design was to be less than two feet tall, offer a somewhat realistic place to sit, and cost less than $200 to fabricate. Miriam Peterson and Nathan Rich of the Brooklyn firm P.R.O. designed what was essentially a zippered burlap bag to fill with empty plastic water bottles consumed over the course of the day. It produced a familiar but also somewhat alarming crackle-crunch when the couple’s 18-month-old, Eve, gingerly sat on it “with adult supervision,” Peterson said.

The bottles in the burlap sack of Miriam Peterson and Nathan Rich’s stool were used to serve coffee at 8 AM.

T+E+A+M, a quartet of professors from Ann Arbor, Michigan, presented a similar assemblage. Their playful assortment of faux-bois foam studs and toy concrete blocks was vacuum-packed into an extra-large Ziploc Space Bag.

Kalos Eidos principal Ryan Brooke Thomas, who was another of the original five organizers, studied modern thought and literature at Stanford and then ran the architecture department of the fashionable international branding consultancy 2×4. Her stool used four cardboard tubes laced together using a two-hundred-foot length of paracord, a military nylon rope. In its cloverleaf symmetry, it recalled mid-century Italian utopian architecture – and was also appropriately d-i-y. “I drilled all the holes very precisely since I wanted to make it myself,” she bragged.

Ryan Brooke Thomas’s stool – concocted of cardboard tubing precisely tied together with string – closed the presentation at 6PM on June 21.

Over the last month, Jerome Haferd and Brandt Knapp asked visitors to their studio to paint yoga mats that would form an elaborate mosaic mural. To make a stool, the mats got rolled and bundled standing on end, like a cord of firewood bound with a yoga strap. The ambition was that the chair would be disassembled, the mats uncoiled then reconfigured on the sidewalk at 7 AM, transformed into an enormous padded painting to serve as the flooring for a morning yoga class for the entire community.

The yoga mats of which Jerome Haferd and Brandt Knapp’s stool was composed were unrolled at 7 AM for a community yoga session.

It’s hard to imagine an architectural hero from the past, say Frank Lloyd Wright, involved in such a generous project. Like many from earlier generations, he wasn’t really called on to connect with colleagues as equals. Then again, Wright was never a fledgling designer trying to make it in New York. “As emerging firms,” Koray Duman explains, “we need to come together.” Events like this make that possible, and fun. 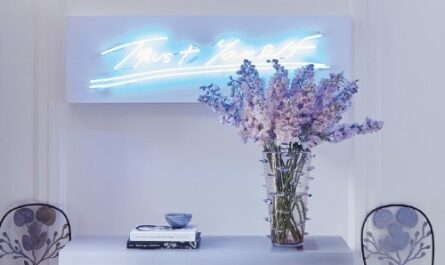