“It was during a big feast scene so there were loads of coffee cups filled with water and juice to fill up the actual goblets, so my guess is that what was in it! It’s like 1984, it was edited out overnight like it never even happened.”

Isaac Hempstead Wright AKA Bran Stark AKA some fans’ favourite to take the Iron Throne in a Game of Thrones series that has had more twists than a game of Twister, is equally as miffed about the Starbucks coffee cup incident as YOU.

“We probably shouldn’t have left a coffee cup out, so people have a right to be annoyed,” he laughs as we get on the phone for a GOT debrief.

After landing the role of Bran at the tender age of ten, Isaac is one of the few Game of Thrones actors to have survived the entire nine years of production. Which is no mean feat when you take into account Bran has survived being pushed out of a window, morphed into a three-eyed raven and a very cold trip over the wall. Boy been busy.

As the end of GOT is nigh, we caught up with the star – now twenty years old and currently at University studying neuroscience, no less – about growing up on set and the most anticipated TV ending of all time.

How did filming GOT as a child affect your relationship with children around you at school?

To be honest, for me it wasn’t that different. Especially when I started it. Everyone at school was too young to watch it, it wasn’t like, ‘wow you are doing GOT,’ it was more like, ‘why are you not at school?’ I think I managed to balance it quite well as I had huge amounts of fun filming and having this ‘actor life’ but I also really enjoyed school as a kid.

I had a solid bunch of friends. It was slightly surreal coming back from filming, getting off a flight and going straight to a Geography lesson at school after working like an adult. It was the teachers who were more excited about it. I would come back from filming and they would be asking loads of questions. 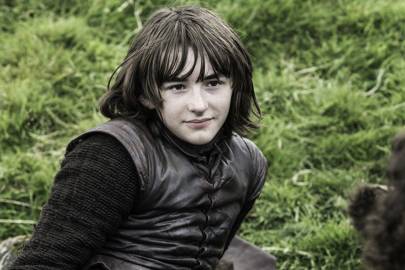 Can you recall a time when you realised that GOT was such a big deal?

It’s quite hard to pinpoint an exact moment when it started happening. I think a moment when I realised how much GOT meant to people was when I wasn’t in it for a season and took a season off. Looking at it from afar, the chaos of it and seeing it from a different perspective I thought, ‘oh my goodness, this is next level!’ I just remember as a kid finding it really exciting getting recognised and people asking for autographs or posing for selfies.

What’s the most hilarious fan incident you have encountered?

Any time I go to one of those conventions and you meet very intense excited fans. I think one of the amazing things about Game of Thrones is the amount of different things people have done from literally creating recipes to tattoos. There’s loads and loads of fan art, which is pretty amazing. Someone recently asked me to tattoo him and draw anything I wanted on him. I was like, ‘arghhh, I don’t want that responsibility!’

What growing pains have you experienced by growing up on screen?

I think it’s a slightly weird thing to adjust to. You feel way more of an adult than you actually are. I think I have always found that slightly frustrating, being 14, 15, 16 years old, and being responsible for yourself, earning your own money, organising my own life, going and working and having to get up in the morning and be on time so you feel like an adult but you are not actually an adult in the real world. I found that quite a hard thing to adjust to.

In general, I have had a very normal upbringing whilst I was doing GOT, I was in school the whole time, so I was pretty much being a normal kid. I just lived a double life. I liked doing both, working and juggling school and having different strings to my bow.

The GOT family is so supportive – who has helped you the most through the experience?

Definitely Dean-Charles Chapman who plays Tommen Baratheon. He’s my closest friend in the world and I talk to him pretty much every day. We met in 2015 when I was 15 and he was 16/17 years old and we never met on the show before and we met at the season five premiere. We just had a chat, hit it off, spent some time together and literally he became one of my closest friends. We have been able to chat about how weird it is being this age going through GOT and what you do next, so Dean is my absolute support on that front.

GOT is filled with sexual and violent scenes – when were you allowed to watch a full episode?

When it came to the first season and up until I was 12 years old, I wasn’t allowed to watch all of it. I was kind of told what was going on, but I didn’t necessarily watch all of it but by season three, I was allowed to watch it. The violence wasn’t actually an issue at all because when I was sitting around on set there would be a decapitated head there and you would watch how it all happened, so it loses all the magic. But it also meant I had to have things explained to me earlier than most people, like covering topics like incest which isn’t part of the average sex talk! But you are working on set and you see these things in the context of the story, so you aren’t watching something isolated, you aren’t just watching a sex scene on screen and wondering what is going on. You are part of the show and part of the community who creates it so it’s not as problematic as it could be.

What’s been the hardest scene to watch back?

I still haven’t seen the scene of Sansa’s rape. I missed that episode. I think the fact that I haven’t watched that means that’s the one that I would find the hardest to watch. 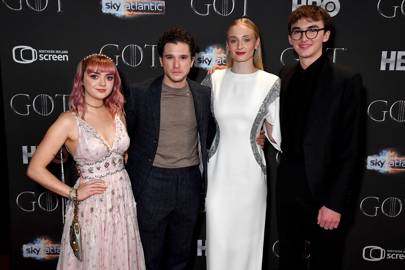 We can’t move for a GOT spoiler story at the moment. Are you finding it hard to self-edit?

I am finding it quite stressful as you are aware that people are analysing anything you say for any kind of clue. It’s kind of a shame as you end up clamming up a bit and not saying anything interesting. Whilst we were doing all the promotion for the show before it came out, I was literally saying nothing of any worth but as the season has come out more and more its fun being able to talk about it and what’s being going on. You really don’t want to spoil it and I really don’t understand the mentality of people who want to ruin it for themselves and those who what to turn nine hours of amazing TV into an article of five paragraphs on Reddit. It’s called spoilers for a reason, especially those who take great joy in plastering it all over the internet for people who don’t want to see it. I find it really frustrating.

Who do you think has made the biggest mistake this season character wise?

The clever thing about Game of Thrones is pretty much all the characters are flawed and have made mistakes. They have all done something wrong at some stage and that makes them the characters they are now. In terms of mistakes I think Bran has made some pretty big ones! The one that lead to the killing of Hodor that was a pretty big screw up! But actually, maybe Theon, he’s made some massive errors in judgement, but he had redemption in his final episode.

What have you learnt about yourself through Game of Thrones?

This might sound a bit dramatic, but I have kind of learnt everything about myself through Game of Thrones. GOT has been my adolescence and its related in some way to every key life event I have pretty much had. It’s been a constant part of my life through to the development of who I am today. The person I am today is in many ways because of GOT. One key thing I learnt though early on was the art of patience and be good in your own company. There are a lot of times when you are working you are on your own, you aren’t in a familiar place and you are away from family and friends.

There are a lot of fan theories doing the rounds – have you read a fan theory that’s guessed the ending?

I haven’t read one which has guessed the ending! However, I remember when that whole Hodor, hold the door thing happened and I read the script I Googled it to see if anyone had guessed it. And some guy who hadn’t got it exactly right, but he got most of it and I thought, ‘wow he’s going to be so happy when he finds out he got this right!’

When did you find out the ending and what was your first reaction?

I found out the ending in September/ October 2017. It’s been a long time of secrets. There were so many emotions when I first read it. When I received the script, I was at University, so I spent six to seven hours reading though it and not talking to anyone. There was one point when I was reading part of the finale where I had to physically get up and walk around the room a bit. I was just thinking, ‘what is happening here?’ There were a couple of big moments like that!