It is estimated that more than 2.1 million children under 15 years of age are living with HIV infection worldwide (see Statistical Tables at go.nature.com/2qqvksh). Almost all of these children received the retrovirus from their mother, either around the time of birth (the perinatal period) or through breastfeeding.

Writing in PLoS Medicine, the CIPHER (Collaborative Initiative for Paediatric HIV Education and Research) Global Cohort Collaboration has shed light on the population of children who survive perinatal HIV infection, living into adolescence and beyond. The collaboration’s far-reaching epidemiological study emphasizes the importance of early antiretroviral therapy (ART) for improving survival rates and clinical outcomes.

Before the availability of ART, the mortality rate of babies perinatally infected with HIV was 25% by 2 years of age. Today, a much higher percentage of perinatally infected children survive into adolescence, but this population is little studied compared with other cohorts of people with HIV. Furthermore, it has been unclear whether or how perinatally acquired HIV might differentially affect adolescents living in different parts of the world.

The CIPHER investigators combined data from researchers in 12 regions of the world who followed adolescents with perinatal HIV infection. For a total of 38,187 adolescents, the authors report factors such as the age at which ART began, the person’s growth record, whether or not they dropped out of their treatment programme, and survival. Individuals were tracked from their first clinic visit and first ART treatment until 15 years of age, and data were collected from the 1980s or 1990s (depending on region) until 2014.

These data allowed the CIPHER researchers to compare adolescents in different countries, regions and country income levels. Their analysis demonstrates that country income level is associated with the stage of life at which ART typically begins. Not surprisingly, the initiation of both care and ART occurred much earlier in the high-income countries included in the study (14 European countries and the United States) than in other areas of the world. Specifically, children first visited a clinic at a median of 1.1 years of age and began ART at a median of 2.5 years in high-income countries, compared with 7.1 years and 8.0 years, respectively, in the low-income countries studied (26 countries in sub-Saharan Africa).

This data set will no doubt improve our understanding of the population of young people living with HIV infection, in no small part owing to its impressive size and breadth. Previously, the only available data sets included many fewer children and adolescents, and were limited to regional or national cohorts. However, the work also comes with caveats. For instance, the cohorts studied in different parts of the world were established for different reasons – some were national registries, whereas others were groups followed as part of other research. As such, there could be some biases in the study. In addition, there were some differences in the data elements that were collected in different regions. Future studies looking at specific aspects of the data might therefore be limited to fewer adolescents.

The CIPHER investigators’ work adds to previous evidence, for the benefits of early ART. Together, these key studies demonstrate that early ART can save lives and preserve normal growth and development in children with HIV infection. However, the scale-up of ART for infected children has lagged woefully behind that for adults. Data from the United Nations’ children’s agency Unicef (see go.nature.com/2qqc5gt) show improvements in the availability of ART for children under 15 years of age since 2005, but there is still much to be done. In 2015, fewer than half of infected children were receiving ART (Fig. 1). 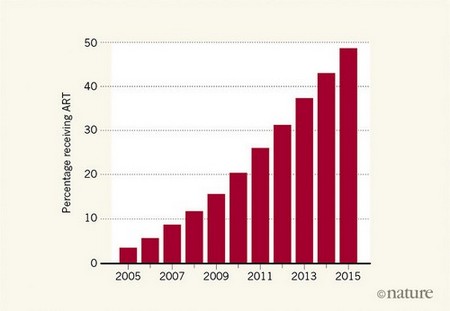 There are many barriers to the optimal provision of ART for children in low-income countries. For instance, problems with infrastructure, including a lack of medical personnel and insufficient drug stocks, are common in many areas of the world. Drug development is challenging, because the physiological changes that occur during childhood can affect drug absorption, distribution, metabolism and excretion, and much work is therefore typically required to make drugs safe and effective for children of all ages. ART consists of three drugs that, in adults, can be given in one pill – but this is trickier in children, because the appropriate ratios of the drugs might vary with age. Finally, infant- and child-friendly formulations that do not require refrigeration and are easy to transport are currently lacking.

Because advances in preventing perinatal HIV infection have markedly decreased the numbers of infected children, there is unfortunately no longer a market benefit to developing paediatric ART, making it an unattractive focus for pharmaceutical companies. The current paper’s clear demonstration of the benefits of early ART demands that efforts to develop optimal drugs and formulations be increased. In addition, infrastructure must be put in place to make ART consistently available to the more than one million children with HIV infection who do not currently have adequate access to these live-saving drugs.

The Verge of Collapse