The opioid epidemic’s devastation does not stop at the millions of addicted American adults: every 15 minutes, a baby is born dependent on opioids, according to new research from the University of Minnesota.

The number of babies who were exposed to opioids in the womb rose by more than five-fold in the last four years, according to a new analysis of Medicaid data.

More than 80 percent of all of those children were covered by the government-subsidized health insurer, meaning that the US government bears the brunt of costs for neonatal abstinence syndrome.

As neonatal abstinence syndrome cost Medicaid $2 billion between 2004 and 2014, mothers need better access to addiction medication and treatment programs in order to spare their babies – and the American budget – from being damaged by drug dependency, the researchers urge. 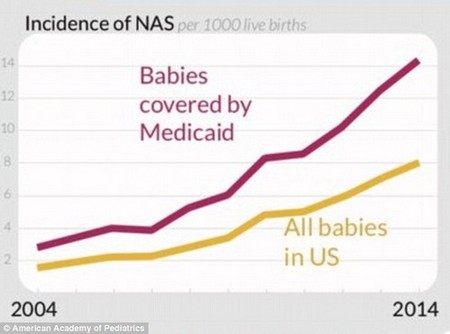 More than 80 percent of the babies born with neonatal abstinence syndrome were covered by Medicaid, costing the government-subsidized program more than $2 billion

If a baby is exposed to opioids – through its mother’s use – while in the womb, the child may be born dependent upon the drugs and have to spend its first days in the world suffering withdrawals.

Opioids can be passed from the mother’s bloodstream through the placenta – right along with all the necessary nutrients – to the developing baby.

The effects on these babies. Many, but not all, will become dependent on the drugs because the effects are all their tiny bodies have ever known. Exposure may lead to lower birth weight for some – increasing their risks of additional health problems.

In more severe cases, babies with neonatal abstinence syndrome (NAS) may have difficulty breathing or have a more poorly-functioning heart.

The first case of NAS was reported long ago, in 1875, when it was called ‘congenital morphinism,’ yet research on the disorder’s long-term effects for children are somewhat lacking.

What scientific evidence we have suggests that these babies may grow into adolescents and adult with developmental and behavioral issues.

In order to diminish or prevent the immediate and any possible long term health effects of neonatal abstinence syndrome, mothers need to be carefully weaned off of the drugs they are on and attempts to quit cold turkey could prove deadly for her baby if they send it into intense withdrawals in the womb.

Research has also shown that the rise of opioid addiction and overdoses has been steeper in American women than men, and that women are more likely to go from drug use to dependency and to do so more quickly than men.

Despite the unique risks posed to women as well as their infants, there are many potential barriers standing between a woman and addiction programs and medication.

According to the new research, about 80 percent of the babies with NAS were born to mothers on the public health insurance program, Medicaid, which is more affordable for poorer Americans, among whom opioid addiction is most common.

Many of these women do not make enough money to afford private health insurance but too much to qualify for Medicaid before they get pregnant.

But Medicaid eligibility requirements are far more relaxed for pregnant women than they are for single individuals who are not carrying a child.

‘So, until they become pregnant, they have limited options and have a difficult time paying for substance abuse treatment prior to pregnancy,’ he says.

Most Medicaid plans do cover the cost of medications to treat substance abuse, but that does not help women that cannot qualify for the health insurance plan in the first place.

Eligibility requirements vary from state to state, with the federal regulations requiring that all states cover individuals who make between 100 and 400 percent of the federal poverty level.

About 14 percent of Americans make less than that, meaning they may not be eligible for Medicaid. Women that fall into this category are likely to be unable to afford treatment for substance abuse.

Until they get pregnant, that is. Once a woman is carrying a child, most of the stipulations for Medicaid go out the window, and treatment becomes accessible to women.

But at that point it is less effective at preventing NAS, meaning that the combined expenses for treatments of mothers, hospital stays and treatment for opioid dependent newborns cost the US $2.5 billion between 2004 and 2014.

Still, ‘we know that mothers who are treated during pregnancy do better, and the kids who are born to these mothers do better when we take care of moms. So, the real key here is supporting moms who have substance abuse and focusing our resources on them,’ says Dr Winkelman.

The US needs to provide this support ‘before, during and after’ pregnancy, he added.

He says that by standardizing practices for treating NAS in hospitals, health outcomes for affected babies could be improved and costs to the federal government could be reduced, as demonstrated by previous work by his senior co-author, Dr Stephen Patrick.

These practices include on-demand feeding, keeping mothers and infants in the same room, ‘simple things’ that have been shown to help babies recover better from NAS.

But as access to care has not improved and NAS treatment practices have remained inconsistent since the study’s most recent data from 2014, ‘I would unfortunately expect that these numbers have continued to rice in more recent years,’ says Dr Winkelman.

Girls who start puberty earlier are more likely to be overweight 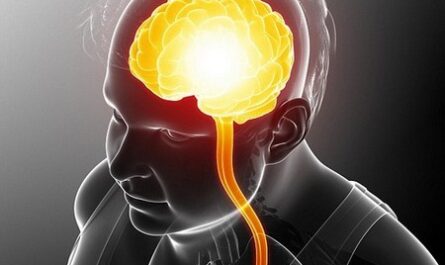