Researchers found cigarette use is more prominent in Netflix shows – like Stranger Things, which had 182 scenes featuring characters lighting up – than it is in broadcast and cable television.

About 79 percent of shows popular among teens and young adults depict tobacco use, a new study has revealed.

Health advocates warn the findings are alarming given the scores of studies showing teenagers are much more likely to take up smoking as a ‘cool’ habit if they see actors smoking on screen.

One of the researchers behind the study, by the advocacy group Truth Initiative, went as far as to say TV shows have as much glamorized smoking tobacco ads despite the global push to make young people aware of cigarettes’ links to cancer. 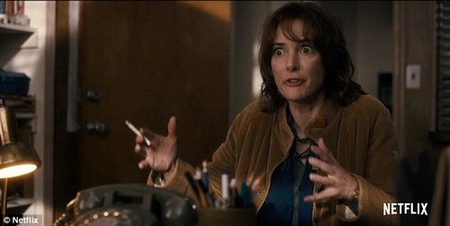 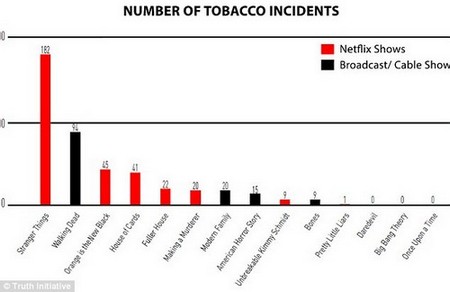 Robin Koval, CEO and president of Truth Initiative, said shows like Stranger Things, which drew an estimated 15.8 million viewers within three days of its second-season launch, said she was stunned by the amount of smoking in a show in 2018.

‘We expected to see quite a bit of smoking, but the magnitude of what we saw was shocking,’ Koval said.

She and her colleagues used a nationally sourced sample to identify the 14 most popular television shows among people between 15 and 24 years old.

The most popular shows included the following broadcast shows (many of which are also streamed online): Walking Dead, Big Bang Theory, Modern Family, American Horror Story, Bones, Once Upon a Time, and Pretty Little Liars.

And the following Netflix shows: Stranger Things, Orange is the New Black, Fuller House, The Unbreakable Kimmy Schmidt, House of Cards, Making of a Murderer, and Daredevil.

Once researchers gathered this information, they watched one whole season of each of these shows.

They found that the seven Netflix shows in the sample contained 319 tobacco incidents compared to the seven broadcast and cable television shows which contained 139.

Researchers found Netflix shows like Stranger Things followed by Orange is the New Black are the worst offenders, with 182 and 45 incidents of characters lighting up, respectively. 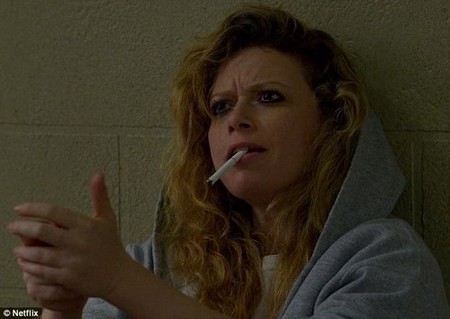 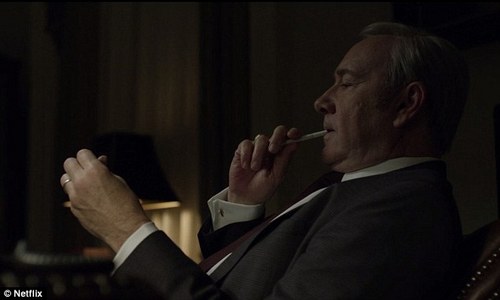 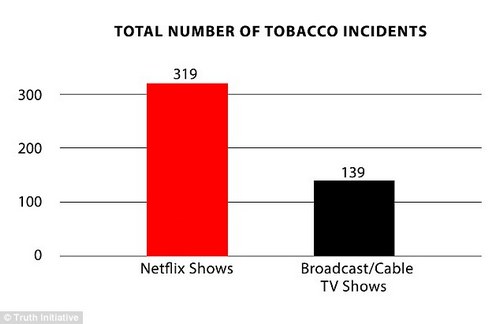 Koval said these findings are particularly concerning due to the personalization of consuming television which could causes young people to smoke.

‘People can watch these shows on phones that are three inches from their face,’ she said. ‘They can also re watch these scenes… so the number of tobacco exposures on these shows can easily be multiplied.’

Research published by the Centers of Disease Control and Prevention in 2017 found teens are two to three times more likely to start smoking if they see people on screen lighting up.

The current findings on the depiction of tobacco use come to light as TV and streaming shows are becoming increasingly popular.

According to Truth Initiative, the number of shows has increased by 137 percent in the last decade alone, and national data indicate US teens and young adults spend an average of 12 to 13 hours per week watching television. 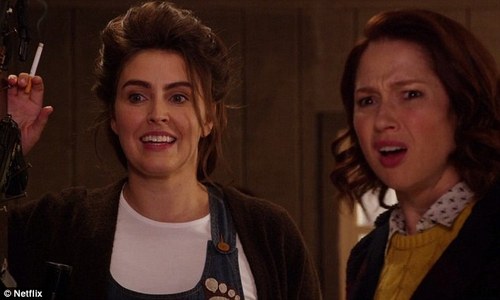 ‘There has been a revolution in television that now encompasses a complex universe including Hulu, Netflix and an emerging world of on-demand platforms,’ Koval said.

‘And while everybody was watching, but no one was paying attention, we’ve experienced a pervasive re-emergence of smoking imagery that is glamorizing and renormalizing a deadly habit to millions of impressionable young people. It has to stop,’ she added.

Researchers at Truth Initiative hope creators of these shows can come up with ways to depict that a character is stressed, edgy or rebellious without the use of tobacco, but fell short of offering an example.

‘These are some of the most creative people in the world’ Koval said. ‘I’m sure they could come up with different ways to show us what a character is feeling.’

10 foods that could reduce your risk of cancer

These are the sleep issues you should discuss with your doctor