I never thought I’d admit but cleaning has become one of my go-to isolation activities (closely pipped by becoming a self-styled wine connoisseur). Has anyone else found that taking the time to clear out their cupboards and declutter their wardrobes is really therapeutic? It seems I’m not alone.

TikTok saw a huge boom in users sharing some genius #cleaninghacks over lockdown – many of which blew our traditional cleaning methods out of the water.

On the back of the TikTok trend for debunking cleaning hacks, MyJobQuote.co.uk has trawled the social media site to curate the 6 major cleaning mistakes we’ve all been making – and how to rectify them using these genius TikTok hacks.

Ever wondered why your ice white White Company towels never retain their vibrancy? Well, according to a viral video from TikTok user @mrslaurenelms, when washing normally, fabric softeners, body oils and minerals can actually remain on your towels and leave coloured residue or stains. Eek. The solution, according to TikTok, is laundry stripping. 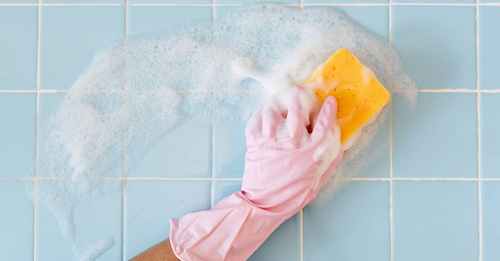 Here’s how to do it…

Laundry stripping is great for linen and towels, but it isn’t recommended for colour clothing as it can cause the colours to run.

I’ll be the first to admit that my shower mats and curtains are at the bottom of my bathroom cleaning priority list but rather horrifyingly, moist bathrooms can leave curtains and mats with a mildew build-up or bad smell. Don’t just shove your mats in the wash; you need to tackle the mildew and mould by following this method:

Most of us run toothbrushes under water before and after brushing, but this doesn’t mean they are clean – especially between bristles. Oh.

In fact, The University of Manchester discovered that your toothbrush is home to more than 100 million bacteria including E. coli and staphylococci (Staph). So how can you properly clean it to combat the bacteria build-up? One really simple way to combat bacteria build-up in your toothbrush is by soaking it in antibacterial mouthwash. Stir the bristled end in it for 30 seconds, and voila! If you don’t have mouthwash, dissolving a denture cleanser or mixture of two teaspoons of baking soda in water.

Limescale build-up is common in the bathroom, mostly developing on taps, bathroom fittings and in between tiles. It’s that manky green stuff that crops up in the most awkward places. Yes, that!

To remove limescale from taps, soak a cloth with a half vinegar, half water solution and wrap it around. Leave for a few hours or overnight, then if required, scrape away residue.

Another way to tackle limescale is with lemon juice, using the same method as above, or simply wiping surfaces with it. Remember to rinse the surfaces clean afterwards and to wash any microfibre cloths or sponges used.

Most Brits use bleach or another disinfectant (I love you, Zoflora!), scrub and then simply wash out the toilet bowl to clean it. But as TikTok user @imagineitdone reveals, that’s not enough.

On top of cleaning the toilet bowl, it’s apparently important that you pay close attention to the tank (something I’ve never even opened). Open the lid of the toilet tank and flush to lower the water level slightly. Coat a brush with baking soda and scrub around the inner sides. Then add a chlorine tablet to the tank, so that the source of the flush is clean.

A common misconception is that the bathtub doesn’t need regular cleaning as we wash in it. Sadly for all the lazy folk out there, this isn’t true.

Here’s how to give your bath tub a proper clean: