This has meant adopting some small daily habits aimed at helping my body prepare for a good night’s sleep. But rather than try to focus all my efforts into a prebedtime ritual, I’ve enacted several small changes throughout the day instead.

As an athlete, sleep is one of the most important parts of my training routine. But it’s not always one of the easiest to come by for me, and I often find myself struggling to get enough meaningful shut-eye each night.

Until recently, it’s been something I’ve learned to deal with. I’ve just assumed I’m someone who doesn’t sleep well. But after a few weeks of finding myself feeling the weight of my poor sleep take its toll on me during the day, I decided to take action.

This was one of my favorite parts of my day, but as someone who now works from home full time, I’ve had to find a new way to commute to work. So, I’ve started to don my best element-ready UA RUSH™ ColdGear® Jacquard Mock ($75) and plan for at least an hour walk each morning. 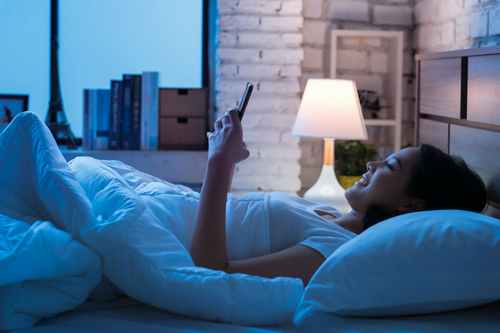 This allows me time to shake off my grogginess, warm up my body and mind, and begin my day with some physical activity.

What’s more, I’ve started to plan new routes the night before so I have something to look forward to upon waking. I’ve even noticed myself setting my phone down an hour earlier at night because I want to be sure to wake up early and take a “longer route to work.”

While I fully admit that I’m getting Zoom fatigue, it’s not just because I’m getting tired of smiling into a tiny camera every day. I started to notice that my eyes were getting tired from going from my phone to my computer to my TV each day. My strained eyes would then be tired, making it, ironically, difficult to relax.

Outfitting my tech gear with anti-blue-light blockers like the Ocushield Anti-Blue-Light Filter For MacBook Air and Pro ($70) and taking appropriate breaks for my eyes has actually helped me cut back on this overstimulated and strained feeling.

Meditation has always been a powerful tool for me. Although I’ve adopted meditation in the morning, before workouts, and during a stressful time at work, I’ve never consistently adopted meditation before bedtime. For the last few weeks, I’ve used the Balance meditation app to customize a meditation program.

I simply filled out a questionnaire noting that stress relief and better sleep were two my main goals, and the app personalized a guided audio program that has trained me on everything from breath focus to body scanning. After only a few weeks, I’ve learned to control my pre-bed stressors much better and get my body in the proper state to get a solid night of sleep.

Get Cozy With a Weighted Blanket

Although I do believe my small changes throughout the day have made a difference, I can’t discredit my actual bedtime ritual. In addition to my nightly meditation, I’ve started making my bed more inviting and relaxing. Sure, I’ve always viewed my bed as “relaxing,” but I never truly prioritized it until now.

The most impactful change I’ve made is using a weighted blanket, which “weighs” the body down, thus helping to regulate the secretion of cortisol – a known stress hormone – during sleep. After a few months of sleeping with my weighted blanket, I’ve felt noticeably more relaxed at bedtime and have slept through the night more.

Greta Thunberg on Tackling the Climate Crisis Amid a Pandemic