But while it’s easy to focus on the bad – because, let’s face it, there has been a lot of it – it’s really important to also devote time to remembering and appreciating the good.

This year has thrown us so many unexpected curveballs, which has required an enormous level of teamwork and togetherness – both nationally and internationally – in order to get by.

We all know how awful 2020 has been. Everyone has been affected in different ways, and some more tragically than others, but we’re all undoubtedly feeling the weight of the collective grief and sadness that this year has inflicted on the world. 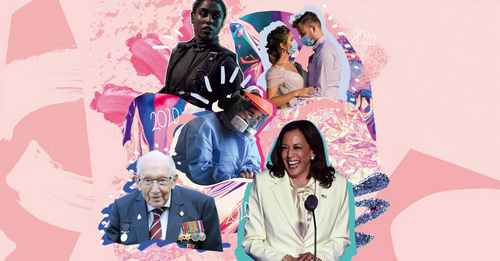 Take Marcus Rashford; the 23-year-old Manchester United star who campaigned tirelessly for free school meals for vulnerable and disadvantaged children, and succeeded in forcing the government to make a major U-turn and support his mission.

And what about Captain Sir Tom Moore, the former British Army officer who won the nation’s hearts as he raised over £38.9m for NHS Charities Together in the run up to his 100th birthday?

Even just this week, there was a landmark change to blood donation criteria which saw the government announce that the rules for gay and bisexual men will be relaxed across the UK in a fundamental shift towards recognising people as individuals.

On an international scale, the environmental impact of global movement restrictions and a significant slowdown of social and economic activities has seen air quality improved in many cities, while the brilliant Lashana Lynch landed the first ever Black female 007 role and COVID-19 vaccines were created and approved in record time.

Uranus, the planet of rebellion, is in retrograde