The Greatest Showman was released at the end of 2017 with a star-studded cast. The musical movie tells the story of Phineas Taylor Barnum, a showman thirsty for innovation and hungry for success. After opening a wax museum, P.T. looks for ideas to make his exhibition come alive and thus the Barnum’s Circus begins. On a mission for fame, he ends up gambling his circus, his wife and daughters and all his money – that’s when things become treacherous for Barnum. “Will he leave everything he’s got behind?”

Showstoppers include, The Greatest Show, Come Alive and This Is Me.

La La Land is the story of an aspiring actress and a jazz musician who fall in love while yearning to make it in Hollywood. From its big opening scene, where a giant cast of extras turn the hell that is gridlocked LA traffic into an all-singing, all-dancing musical event, the whole movie is pure joy.

Judy Garland dazzled as Dorothy in the movie that introduced the world to Glorious Technicolor™ in a truly magnificent fashion. The Kansas farm girl, who blew into Oz on a cyclone, inadvertently took out the Wicked Witch of the West and earned herself a pair of ruby red slippers. With her devoted pals Tin Man, Lion and Scarecrow they followed the yellow brick road, hung out with munchkins and sang all the way to the Land of Oz in a bid to get herself home. Show stoppers include Over the Rainbow & We’re off to see the Wizard 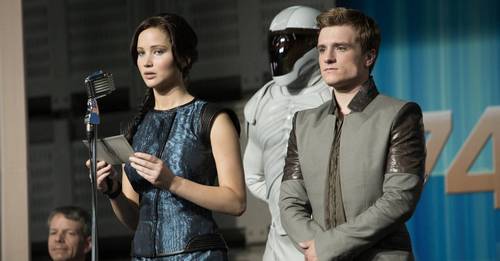 Everything you need to know about the Hunger Games prequel