I’m not saying that 2020 has exactly been a fun one. For starters, we’ve spent most of it locked in our homes and the rest of it tentatively trying to exist in an anxiety-ridden new normal; face masks and all.

But the most juddering reality of 2020, the thing that leaves a nasty taste in our mouth and a desire to get out our angry sharpies and draw a line through it, is precisely because everything about it is unfamiliar. It took normal and radically restructured it, leaving it unrecognisable and us-furious at 2020 pulling the rug out from under us – having difficulty acclimating to the new normal.

When 2020 started caving in around our ears, we all seemed to collectively decide that 2020 was a write-off. It was perhaps easier – when crossing lines through everything in your diary – to just draw one big line through 2020 itself.

But should it be? 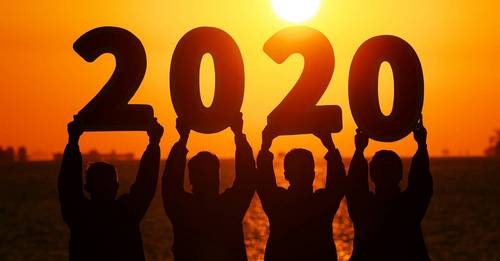 However, that’s exactly why 2002 should not be cancelled. The fact that it changed what we think of is normal may be unsettling, but it can also be revolutionary, and therefore exciting.

Think of how profoundly your mindset has changed from January 2020. Think how much we took for granted; a drink in the pub, a hug from a friend, even the ability to walk right into a shop without queuing. 2020 exploded our reality and made us grateful for all that we have; from holding on to a job to having a garden, however small. It was a moment of self-reflection, a pivotal pause that made us rethink everything about ourselves and about our place in the world.

It tore open our consciousness. The systemic inequality allowed to fester unchecked beneath the surface of our society became an open wound this year. The economy became a discussion amongst friends in a way it never was before. How can we ignore the huge economic disparities in our country anymore, when we have seen how stark the difference is between privileged and desolate, probably right around the corner from where we live, maybe even within your own friendship group?

Covid19, as people were very fond of saying, didn’t care who you were; it was indiscriminate. Yet the circumstances that may have led to you contracting it, were absolutely discriminatory. The service industry; from supermarket workers to bus drivers, to the countless NHS workers, all found themselves on the front line of this pandemic and many lost their lives to it. Those living in poor and crowded housing were also hit hardest. This was impossible to ignore in 2020.

Black people were four times more likely to die from Covid19 in the UK. It was an unsettling fact thrown in amongst a year that also lit a fuse under the Black Lives Matter movement, which had a resurgence after the death of George Floyd in May. Despite this worrying Covid statistic, thousands of Brits marched through the UK to protest the systemic racism that still permeates our society; to highlight that the culture which led to George Floyd’s murder was not unique to the US.

Since George Floyd’s death, our consciousness has not been allowed to settle. We have not allowed complacency to set in again. From our feeds, to our media to a broader cultural conversation, the needle is slowly shifting. This year was one which asked us to do more than just shield ourselves with “but, I’m not racist.” It asked us to be anti-racist, and it asked it of everyone.

Intersectionality was pivotal in 2020. Trans lives, too frequently disregarded or actively policed and destroyed, became another focus. Pride month may have lacked its parades and parties, but was alive with protest (the true origin of Pride) and a kinetic conversation and analysis of the LGBTQ+ experience, and what more can be done to protect and include those who feel harmed and marginalised.

Women suffered enormously in 2020 and made up 78% of the workforce disrupted by Covid19. Not only that, but we saw an alarming return to the traditional caring model; where working mothers felt the burden of childcare fall squarely on their shoulders, even with a partner at home. This unsettling development was another lit fuse, reminding us that we are still a far distance from gender equality- even in our own homes.

Then Wiley decided to throw a hand grenade at the dying days of July, with his anti-semitic twitter tirade. Suddenly, the anti-semitism which had long brewed in our society, was exposed and- for many of us- it was a much needed wake up call, that an entire community within our society was suffering from a discrimination too many of us were not even bothered to understand.

2020 blew up that complacency, as it has torn its way through the status quo. It is a year unafraid to speak the unspoken taboos, to expose our inequalities and societal malaise.

It made us stop. It made us think. Hopefully it will make us rethink.

2020 is not the year we should pretend never happened.

It is the year that changed everything.

If it gave us a new normal, let’s make it better than the old one.

Pandemic has us pining for the past

How to celebrate and support Pride, aside from just posting a flag on Instagram

It’s much more often than you’re probably washing yours