Exercising for 20 minutes a day reduces the risk of becoming depressed later in life by a third, according to new research.

An international team of researchers, including experts from King’s College London, found people with higher levels of physical activity had lower rates of depression later in life, regardless of lifestyle factors such as age, smoking and body mass index (BMI).

The study, involving more than 250,000 people, and published in the American Journal of Psychiatry, found that depression could be prevented by keeping fit – no matter where participants were located.

Running upstairs is an example of vigorous physical exercise which can benefit the mind as well as the body and doesn’t require a gym membership or expensive equipment. 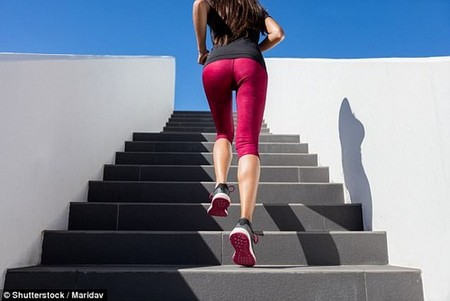 Meeting the NHS’s recommended minimum weekly exercise level cut depression risk by a third compared to people who did not meet the requirement of 150 minutes a week.

The protective effect was shown even when considering other health factors, said Dr Brendon Stubbs, of King’s College London, who is Head of Physiotherapy at the South London and Maudsley NHS Foundation Trust.

He said: ‘We found that higher levels of physical activity were protective from future depression in children, adults and older adults, across every continent and after taking into account other important factors such as body mass index, smoking and physical health conditions.

Data was collected from 49 unique studies in the UK, US, Australia, Brazil, Belgium and Sweden of people who did not have a mental illness, to determine whether physical activity levels were associated with the risk of an individual becoming depressed.

In total, 266,939 individuals were looked at over a seven and a half year period.

On average, the participants were followed up with after 7.4 years and the data compared.

Authors of the report now want to see their research implemented in policy changes which reflect the importance of physical exercise.

Dr Simon Rosenbaum, senior research fellow at the University of New South Wales Sydney and the Black Dog Institute, said: ‘The challenge ahead is ensuring that this overwhelming evidence is translated into meaningful policy change that creates environments and opportunities to help everyone, including vulnerable members of our society, engage in physical activity.’

Dr Joseph Firth, research fellow at NICM Health Research Institute at Western Sydney University, added: ‘The compelling evidence presented here provides an even stronger case for engaging all people in regular physical activity; through schools, workplaces, leisure programs and elsewhere, in order to reduce the risk of depression across the lifespan.’

How can you meet the weekly minimum exercise to stay healthy?

Loud snoring thins the skull and may be deadly, study finds