Whether you were around to remember Lady Diana Spencer from your younger years or have merely heard, read and watched countless tales of hers, you’re likely familiar with the view that she is now widely-considered quite the style icon.

Whether she was considered as such in her day is a hotly-debated topic, but as some of her favourite trends of the eighties in particular fall back into mainstream style there’s no doubt that several of her looks have been pinned – both literally and figuratively via Pinterest – onto endless mood boards.

Having introduced us to the likes – and wardrobes – of Princess Margaret, Princess Anne and The Queen in the first three series, Netflix’s mega hit The Crown hasn’t exactly been short of major fashion moments so far.

But this weekend, as series four lands on our screens, those with a fondness for sartorial excellence will likely be among the first on the sofa as we welcome the eagerly-anticipated arrival of Princess Diana to the storyline. Played by the superb young actress Emma Corrin, this is one character that the wardrobe department doesn’t want to get wrong.

But how well is The Crown going to do in the wardrobe department when it comes to The People’s Princess? Scroll down for a sneak peek that should answer that question… (They do it brilliantly, if you want the quick answer).

14. The floral blouse beneath yellow dungarees

These affordable wedding guest dresses are here to save the day

Dressing like a French girl in London, here are my styling tips 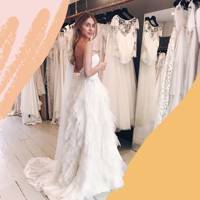 The most beautiful bridal clutch bags to carry your wedding day