When I walk through the doors of Molteni & C’s new flagship on New York’s Madison Avenue, Vincent Van Duysen reads my mind. “You don’t have the feeling of being in New York,” the designer says. Indeed you don’t, and that’s by – very meticulous – design. For the new showroom, Van Duysen looked to the design heritage of the Italian brand, presenting its passion for craftsmanship and fine materials in a way that also references his own penchant for textured, understated modern spaces. 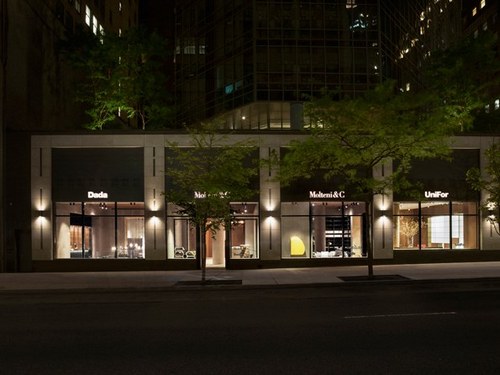 At the heart of the building is a dramatic, sculptural walnut staircase.

“It feels like ‘Welcome to our Molteni palazzo,” the designer says with a smile. “From the beginning, we tried to import this Italian elegance to Madison Avenue.” Standing in the showroom’s entry, Van Duysen, who has been Molteni & C’s creative director for two years (and just re-signed his contract for another three), gestures to the various ways in which he has done so. “The concept is you come in through this antichambre, then you’re in the central vestibule with the walnut staircase, and you see that all the materials are Italian.”

Van Duysen chose materials, like wood and travertine, that reflect the craftsmanship of Molteni & C furniture.

The rooms, which Van Duysen and the team at Molteni built up from an essentially bare-bones open space in the span of just four months, are swathed in travertine, walnut, and a cement treatment that calls to mind Venetian plaster.

“The colors are muted, desaturated pastels, which connect with Italian frescoes, and the grays, which refer to the Tesino river in the north,” the designer explains. “I wanted to bring in these materials that are a part of the heritage of Italian culture.”

A sofa in the showroom’s entry. The green color ties in with the plants found throughout the space. “Green,” says Van Duysen quite simply, “is life.”

That heritage is important to Molteni & C, a family-run company that has been handcrafting furniture in Italy since 1934, presented at the first Salone del Mobile, and produced designs by legends like Gio Ponti and Carlo Scarpa. It’s what drew Van Duysen to the brand in the first place. “You still see the hand of the people who are making their product, and there’s a passion for that craftsmanship which they work very hard to transmit to the consumer,” he says.

As Van Duysen sees it, this is a vision that has become only more important in our fast-paced, on-demand, often disposability-minded society. “I believe that we’re living in a time when we need to be more aware of the beauty and quality and persistence of good design,” Van Duysen says. “Sometimes design is very fast and artificial, and you lose a lot of value, and you lose awareness of the craftsmanship. I want to bring back the values and make people aware of the process. It’s a very human approach – that’s why I’ve brought this very domestic feeling into my work with them, which ties into my own residential projects, and even my own home.”

Indeed, the showroom is arranged to feel less like a flagship store and more like an assortment of apartments (in the style becoming ever more common) – or the makings of a traditional palazzo.

To further evoke the feeling of a well-appointed home, Molteni & C commissioned Caroline Corbetta to curate a selection of works by contemporary Italian and American architects for the space – the colorful brushwork of Stephen Felton or Jacopo Miliani further underscores the brand’s reverence for craftsmanship while also adding to the “grandeur” that Van Duysen says he wants to return to Madison Avenue.

A kitchen designed by Van Duysen in the showroom.

“In this world where everything is so cheap and fast and disposable, I wanted to bring back that elegance,” he says. Besides, he continues, “I’m an art collector myself, and I believe art gives that extra touch. It brings you out of the comfort zone, and it opens your mind. It makes you want to communicate and be in dialogue.” An elevated notion for a furniture showroom certainly, but one that Van Duysen has somehow created. 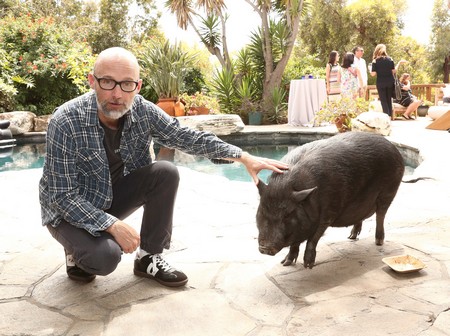